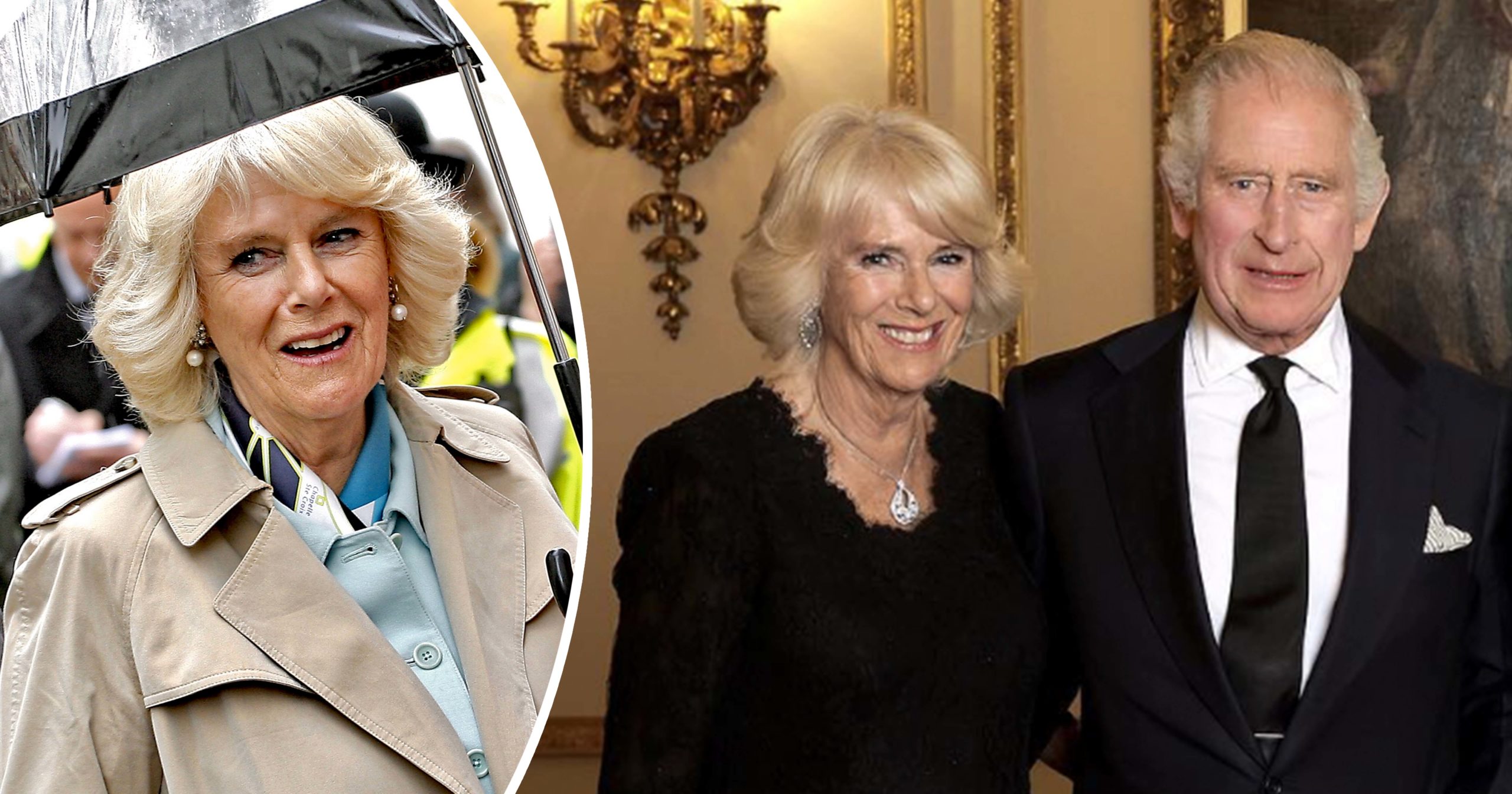 King Charles and Camilla, the Queen Consort, have been visiting Scotland as a part of their first official royal duty after the mourning period for Queen Elizabeth ended.

The couple was seen visiting Dunfermline Abbey for its 950th anniversary, and met with representatives from Historic Scotland to learn more about the local area’s history.

A host of new duties will come for King Charles and Camilla – as well as for Prince William and Kate Middleton – as they step up in the line of succession within the Royal Family. That they will remain the subject of intense public interest for the foreseeable future is assured.

Indeed, one particular picture posted by the Palace on their official social media channels had many people talking.

Even a body language expert has spoken out about the new image, giving us more details as to why Camilla, Charles, William, and Kate are posing in a specific way.

The lives of the members of the Royal Family are slowly returning to normal as they resume their duties following the Queen’s passing. For Camilla and King Charles, that means several new engagements, especially for the King, who unfortunately has to step down from some of his charitable work.

But even though it’s King Charles who is taking over as the monarch, Camilla, the Queen Consort, will also accept many new responsibilities. At least, that’s what royal expert Katie Nicholl claims in her new book.

In The New Royals: Queen Elizabeth’s Legacy and the Future of the Crown, Nicholl explained that there had been occasions when Camilla had been the one calling the shots and influencing Charles to make big decisions. One such decision was when he fired his closest aide, Michael Fawcett.

In 2021, Fawcett was accused of offering a Saudi tycoon a knighthood in exchange for a $2 million donation to King Charles’ fund. After stepping back, Fawcett resigned as the foundation’s CEO.

However, a friend, who has not been named, told the royal author that it was Camilla’s idea. She was said to have told her husband to fire Fawcett.

“[Camilla] said Michael had to go. She essentially ousted him. She was never really a fan of Fawcett, and she could see how damaging this could be to Charles’ reign,” Nicholl writes in The New Royals: Queen Elizabeth’s Legacy and the Future of the Crown.

Moreover, she’s said to have inserted herself at times into the strained relationship between her husband and his son, Prince Harry.

Weeks before the Queen’s passing, Harry and Meghan paid a short visit to England on their way to the Invictus Games. King Charles wanted to meet his son and daughter-in-law to clear the air.

Harry and Meghan wanted a mediator at the meeting to ensure peace. However, their request is said to have left Camilla very upset.

“He actually suggested that they use a mediator to try and sort things out, which had Charles somewhat bemused and Camilla spluttering into her tea,” Camilla’s friend further told Nicholl.

Despite the Queen’s death, the traditions of the royals will continue to live on. Of course, there are many guidelines and rules the family members have to live by – but traditions have their own place of import.

Interestingly, it seems like Camilla is willing to break one of the oldest royal traditions, if reports are to be believed.

Queen Elizabeth had what was called “ladies-in-waiting”, those in charge of supporting the monarch with personal correspondence and organizing her schedule.

Moreover, they accompanied the Queen during her scheduled public appearances and, amongst other things, helped gather flowers the public wanted to give to the Queen.

However, Camilla seems to have decided not to use ladies-in-waiting, one of the oldest positions within the royal house.

A source told Daily Mail that the Queen Consort wants to “remodel” the monarchy – instead of ladies-in-waiting keeping her longtime private secretaries.

“When she got married and set up her own office for the first time, she got two brilliant private secretaries, Amanda Macmanus and Joy Camm. But they were very much “two for the price of one,” the source explained.

“The Queen Consort will do things a little differently. She currently has two private secretaries who do some of those traditional duties anyway. And she has quite a lot of good and decent friends around her whom she can call on, as and when is necessary, to support her. I suspect she’ll dip into her close circle of friends, maybe geographically.”

Just days ago, Buckingham Palace released a newly taken portrait of King Charles and Camilla. In the picture, they can be seen standing alongside the heir, Prince William, and his wife, Kate Middleton.

The picture was taken at Buckingham Palace just before Charles and Camilla hosted a reception at the Palace for world leaders on the eve of the Queen’s funeral.

However, there were specific details in the rather unusual picture that caught the eye of the public. When out on royal duties – or in a public display – Charles usually avoids affection with his wife, Camilla. But this time, he placed his arm around her back.

Harry and Meghan attended the funeral of Queen Elizabeth, but shortly after left the country and flew home to the US. The rift between the two family members and the rest of the Royal Family has been apparent ever since they left UK shores. It was then further hindered by their infamous interview with Oprah Winfrey.

Coincidentally, later this year Harry is set to release his memoir. According to many royal experts, the text might include plenty of criticism towards the Royal Family, especially King Charles.

Now, Harry and Meghan weren’t included in the aforesaid picture. But according to body language expert Judi James, there are clear signs that Charles and Camilla are getting ready for an “attack”.

“As any tribe or dynasty knows, a show of unity, continuity, and strength is vital once it loses a leader,” James told Mirror. “The royals are making exactly the right ‘survival’ statement here, following the death of the Queen.

Why Charles placed a hand behind Camilla’s back

“This looks like a forming up under potential attack, particularly from the direction of the US, and Charles’ unusual PDA of placing an arm around Camilla’s back, mirroring her arm round his, could be seen as a message in the same direction, as there have been rumours that Harry could have been critical of Camilla in his new book.”

Moreover, the fact that Charles decided to include his heir and Kate in the photo signals, according to Judy James, that “they are in one line of four,” rather than being the King and his heir. The body language expert added that it suggests a sense of “I’ve got your back” teamwork.

“William’s pose with his hands clasped in front of his torso, suggests a dutiful approach to his father, while Catherine places an arm around her husband’s back to signal ongoing support,” James said.

The photo comes as Charles and Camilla are carrying out their first royal engagements as King and Queen Consort following the end of the mourning period for Queen Elizabeth.

On Monday, the King and Queen Consort visited Dunfermline, Scotland, for its 950th anniversary and met with representatives from Historic Scotland to learn more about the history of the local area. The former town was recently officially turned into a city during the Queen’s Platinum Jubilee celebration.

Moreover, Camilla and Charles also attended an official council meeting at the City Chambers. There, the King made the transition into a city official and made a short speech.

Last week, William and Kate – the Prince and Princess of Wales – had their first royal appearance after the mourning period ended when they visited Wales.

Even though we are sure that Camilla and King Charles would wish for Queen Elizabeth to still be alive, now is also a time for celebration as Charles becomes monarch. On Tuesday, they actually got to celebrate even more – as one of the Queen’s previously-owned horses rode to victory in a race.

A spokesman for the king and Camilla revealed they were “thrilled” to hear that Queen Elizabeth’s old horse, Just Fine, had won a horse-racing event in Leicester, England. According to Hello, it landed the monarch almost £9,000 in winnings.

“Their Majesties are thrilled by Just Fine’s success,” they said late Tuesday.

“I’m delighted that the King and Queen Consort have had their first winner and they’ll be delighted,” The King’s racing manager, John Warren, who was the Queen’s trusted racing adviser for years, added.

“A winner for the King”

“I’m also absolutely thrilled for Sir Michael Stoute, who was probably the longest-standing trainer for Her Majesty, and for Ryan Moore, who has put in a big effort as well.”

Sir Michael said: “A winner for the King. It is great to have done that for him – and he was very impressive.”

Not long ago, Warren also spoke about the late Queen’s last day at Balmoral Castle, where she passed away. He told PA shortly before her funeral that she was in “tremendous form” and spoke about her love of horses until the end.

“We sat there for hours over the weekend strategising and making plans going forward,” Warren said. “And I think the nicest thing for me is to know that she was surrounded by her family members.”

“She was in such a healthy state of mind and in tremendous form. It’s very important to know that she was absolutely, wonderfully switched on.”