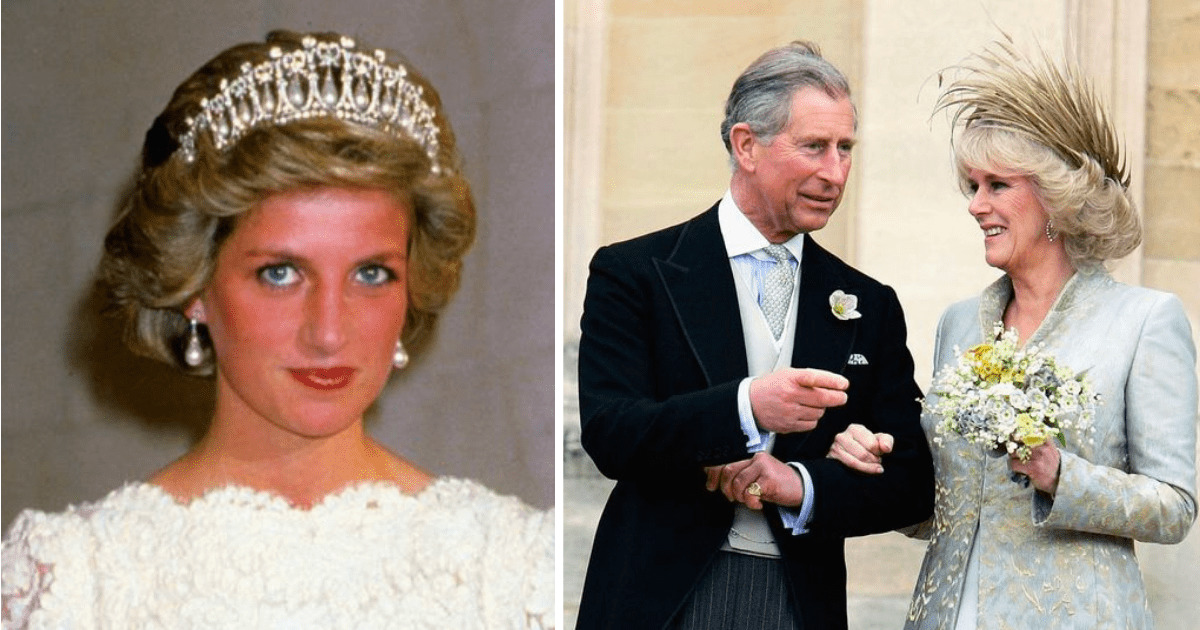 While love triangles around the world abound, few in recent memory have captured our attention as much as the one between the late Princess Diana, King Charles, and Camilla Shand – now known as the Queen Consort.

After Queen Elizabeth’s tragic passing, A significant piece of jewelry most recently worn by Camilla has given royal fans much to say.

The jewelry in question is none other than a stunning diamond, a royal family heirloom that had, just before Camilla, been one of Princess Diana’s most prized gems.

The “Prince of Wales’ Feathers Brooch” has been passed on in the Royal Family for generations and before Diana, it was safely kept by Queen Elizabeth II.

When her son Charles and Diana were married, it became a truly one-of-a-kind wedding gift for the young bride.

It’s no secret that Princess Diana and King Charles had a tumultuous marriage. Stories of their difficult union made headlines everywhere throughout their 15-year relationship, and the marriage ultimately ended with divorce in 1996.

It’s also no secret that perhaps the bulk of their issues surrounded Prince Charles’ affections for the Duchess of Cornwall, Camilla Shand – and vice versa.

After first meeting in 1970, Charles and the Duchess began their romance, and both wished to take it further into a marriage. But this wasn’t possible, as, in the eyes of the Crown, Camilla was an unfit candidate to marry the Prince.

Camilla lacked the appropriate aristocratic bloodline and was in addition not considered “virginal” enough for the prince.

Despite this, the pair couldn’t help but maintain their close relationship, though publicly, they consistently called themselves friends.

That “friendship” didn’t cease, even after Charles married Diana, and it eventually culminated in their marriage in 2005.

Charles, ever so fond, wanted to make sure his second wife received only the best… but that included the famed diamond brooch, also his first wife’s most prized wedding gift.

Not the Only Gift

This was, whoever, far from the first gift Charles bestowed to Camilla.

The Queen Consort notoriously received a rather untimely gift from Charles, just two weeks before he and Princess Diana were scheduled to be wed: a gold chain bracelet with a blue enamel disc intertwined with the inscriptions “G and F” (Gladys and Fred) — Charles and Camilla’s nicknames.

Princess Diana has previously admitted that she became aware of the gift after someone in the royal office had disclosed information about it to her. But it wasn’t until she saw the parcel containing the gift with her own eyes that she was truly torn apart.

“I was devastated,” she said. “He’d found the virgin, the sacrificial lamb, and in a way, he was obsessed with me. But it was hot and cold, hot and cold.”

At lunch on that same day, King Charles presented the bracelet to Camilla.

Princess Diana was completely heartbroken and even told her sisters that she simply could not marry the Prince.

“So I went upstairs, had lunch with my sisters who were there and said: ‘I can’t marry him, I can’t do this, this is absolutely unbelievable,'” she explained in her autobiography.

Despite her apprehensions, two days later, on a Wednesday, Charles and Princess Diana were married at St Paul’s Cathedral.

Princess Diana’s marriage to Charles in 1981 captivated the whole world. Naturally, the Princess was bestowed with plenty of wedding gifts, but perhaps none as significant as the Prince of Wales’ Feathers Brooch which has a long history of being possessed by royalties and which the Queen Mother offered to Diana herself.

The stunning diamond brooch was first bestowed to Princess Alexandra of Denmark in 1863 in celebration of her wedding to King Edward VII.

The spectacular jewelry piece features diamonds with small emeralds surrounding the Prince of Wales Ostrich Feathers, which are in turn made up of additional smaller diamonds.

The iconic brooch was passed down generation after generation, making the rounds amongst royalty. It reached Queen Elizabeth II before encircling the neck of Princess Di in 1981, who liked to wear it as a necklace.

The night just before their wedding, Diana also received a signet ring from Charles, accompanied by a card, saying:

“I’m so proud of you, and when you come up, I’ll be there at the altar for you tomorrow. Just look ’em in the eye and knock ’em dead.”

Despite the myriad of doubts, apprehensions, and fears no doubt plaguing both bride and groom’s minds, the wedding went forward, and Prince Charles was indeed at the altar waiting for his beautiful bride as she walked down the aisle.

For Princess Diana, it was an anxiety-ridden event. As she describes in her autobiography, she of course knew that Camilla would be in attendance, and this plagued her mind in the days and hours before the big moment.

She recalls the exact moment she laid eyes on the Duchess of Cornwall: “So walking down the aisle, I spotted Camilla, pale grey, veiled pillbox hat, saw it all, her son Tom standing on a chair. To this day, you know – vivid memory.”

The famous piece of jewelry was returned to its previous owner, Queen Elizabeth II, after Diana’s untimely death in 1997.

But less than 10 years later in Charles’ second marriage in 2005, Camilla would become the new recipient of the priceless gem.

She was first seen wearing the gem at a movie premiere, a year after her marriage to Prince Charles.

Many were shocked to witness the over one-century-old gem adorning Camilla in the form of a brooch. It was clear that after Charles and the Duchess married, she was next in line to receive the Prince of Wales Feathers Brooch.

The public also noted that the Duchess had redesigned the iconic gem from necklace to brooch. For many the whole concept of sharing something so meaningful with a previous wife is unthinkable at worst, or in poor taste, at best.

For Charlotte White, the Head of Design at 77 diamonds, “The notion of Camilla wearing a sparkling emerald and diamond brooch that once rested gracefully as a pendant on Diana’s skin and close to her heart does feel somewhat jarring when you think that many years ago Camilla was Diana’s husband’s lover.”

“And yet, this 158-year-old jewel does contain within it an undeniable link to Prince Charles, the man to whom both these women are inextricably linked,” she added.

Camilla wears the priceless piece of jewelry publicly reportedly due to Prince Charles’ adamance that she is entitled to do so.

“It is understood that the Prince was particularly keen for his new bride to wear the brooch because of its association with successive princes of Wales,” a source revealed.

In addition to the movie premiere in 2006 where Camilla was first seen adorning the brooch, she was spotted at Cheltenham Festival in 2012 with the piece, as well as in 2019, for a reception at Buckingham Palace for Prince Charles’ 50th investiture Anniversary.

Whether or not you think it’s right that Camilla wears Diana’s former brooch, what’s clear is that it makes it all the more significant.

Indeed, the fact that both ladies in such a notorious love triangle have now worn the brooch significantly increases its value, according to Maxwell Stone, creative director from Steven Stone Jewellers.

“As this is a royal jewel worn by not one, but two members of the royal family, it probably has an estimated value of around £100,000 thanks to its legacy,” he said.

Needless to say, the Duchess of Cornwall remained for many years a thorn in the relationship between Princess Diana and Charles.

Gifts shared between the lovers heavily plagued Princess Diana over the course of her union with Charles.

While on their honeymoon, Lady Di stumbled upon two photos of her husband’s lover hidden in his diary.

On a separate occasion, she discovered that her husband had a pair of cufflinks with the letter C intertwined in his possession. She of course immediately knew which names those two Cs represented.

When she confronted Charles and asked him whether the gifts were from Camilla, he simply confirmed it but played it off as a gift from his “friend” – and nothing more.

“Jealousy, total jealousy – and it’s such a good idea two ‘C’s,’ but it wasn’t that clever in some ways,” she wrote.

It was perhaps doomed from the start – Camilla and Charles’ clear everlasting affections for one another simply meant his relationship with Diana would never work.

Despite the undeniable immorality of these lovers’ actions during the time Charles was married to Princess Diana, one cannot deny that whatever they had was real: Camilla and Charles remain together today.

But one thing Camilla isn’t going to be wearing is Diana’s tiara, also known as the Spencer tiara. The big, beautiful masterpiece set with floral designs was one of Princess Diana’s favorite and most worn items.

The iconic royal accessorize was made in the 1930s for Cynthia Spencer, wife of the 7th Earl Spencer – Diana inherited the piece and famously wore it during her wedding to Prince Charles at St. Paul’s Cathedral.

This summer, it was displayed at an exhibition in London as part of Queen Elizabeth’s Platinum Jubilee. Under it, there was a note:

“The tiara was most recently worn by Celia McCorquodale – niece of the 10th Earl Spencer Charles – at her wedding in the Spring of 2018. The Spencer Tiara is now set to be inherited by Princess Charlotte.”

What a profound story of love and pain! What do you think? Should Camilla be wearing Diana’s former prized possession?