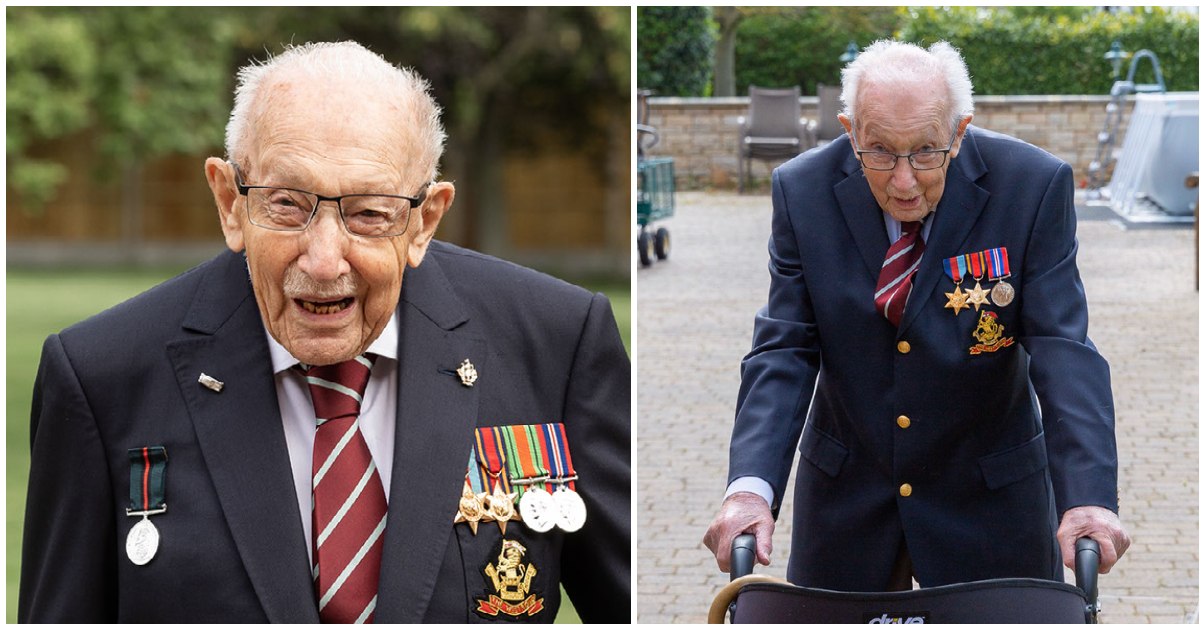 The ongoing COVID-19 pandemic has consumed all of our lives for the past year, with what has seemed like an endless stream of bad news and heartbreaking statistics.

But there has also been light in the darkness. We’ve been moved by stories of people stepping up in this difficult time, doing their part to make a big difference in people’s lives any way they can.

One of the most inspiring heroes to emerge from this pandemic has been Capt. Sir Thomas Moore, the World War II veteran who raised millions for the National Health Service by walking around his garden, ahead of his 100th birthday.

Sadly, his family announced today that the veteran has passed away, after being hospitalized and testing positive for COVID-19.

But his most famous act of service to his country came decades later, in an unexpected fashion. When the coronavirus pandemic hit last year, just weeks ahead of his 100th birthday, Moore knew he had to do something to help.

He decided to raise money for NHS Charities Together through a one-man walkathon, doing laps around his home garden.

Moore’s “100th Birthday Walk” became a worldwide phenomenon, one of the major inspiring stories of the pandemic.

While he initially just aimed to raise £1,000, he quickly far surpassed the goal, raising millions. As of today, his fundraising page has raised £32,796,155, or nearly 45 million USD, for the NHS.

Like many health organizations, the NHS was overwhelmed by the unprecedented health crisis. According to the BBC, Moore was motivated to help the service after being treated for skin cancer and a broken hip.

And his generosity was greatly appreciated.

“We cannot thank him enough for all that he’s achieved and we wish him a very happy birthday, and look forward to continuing to ensure that what he’s done is used to improve the lives of the NHS staff and volunteers that are giving so much to their communities at the moment,” the charity’s chief executive Ellie Orton told BBC.

As his story spread, he also received the highest praise from the UK’s most important figures.

“Your heroic efforts have lifted the spirits of the entire nation, you’ve created a channel to enable millions to say a heartfelt thank you to the remarkable men and women in our NHS who have all been doing the most outstanding job,” said Prime Minister Boris Johnson.

Even Queen Elizabeth was moved and thanked Moore — first with a birthday card, and then something even more special: knighthood.

On July 17, at an in-person ceremony, the Queen officially dubbed him Sir Capt. Thomas Moore.

Sir Moore didn’t slow down after that: he topped the British music charts after appearing on a charity recording of “You’ll Never Walk Alone,” and set the Guinness World Record for “most money raised by a charity walk.”

Tragically, the man who did so much to help others during the COVID-19 crisis ultimately became a victim of it himself.

On January 31, it was announced that he had tested positive for the coronavirus, and was admitted to the hospital, battling pneumonia.

Two days later on February 2, it was announced that Sir Capt. Moore had died. He was 100.

The news has inspired waves of condolences and tributes, including from the Queen, who sent an official message from Buckingham Palace.

“Her Majesty very much enjoyed meeting Cpt Sir Tom and his family at Windsor last year,” a palace statement says. “Her thoughts, and those of the Royal Family, are with them, recognising the inspiration he provided for the whole nation and others across the world.”

Rest in Peace, Capt. Tom. Thank you for all you did for your nation’s hospitals in this time of crisis. You’re generosity will never be forgotten.

Share this story with your condolences for this great hero.