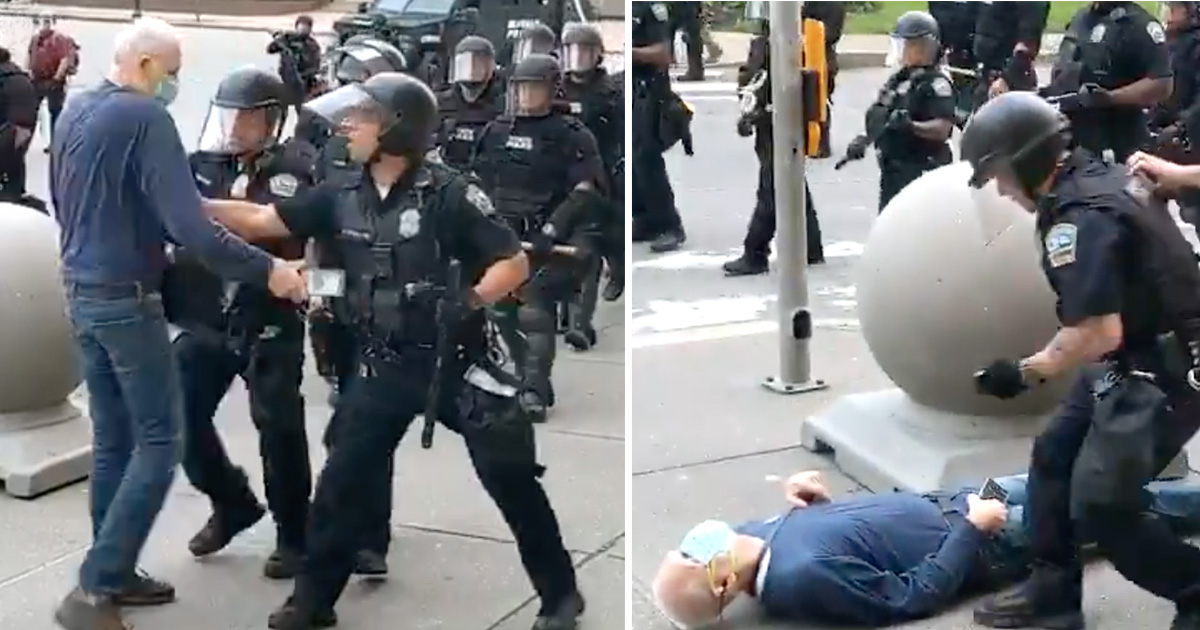 Last year the shocking video of a 75-year-old man being shoved to the ground by police officers in Buffalo was released to the world.

The jarring footage shows the elderly man lying on the ground with blood pouring from his head while the officers march on during protests over the killing of George Floyd.

Now the two officers who were suspended following the disturbing incident in Niagara Square in Buffalo, New York, have had felony charges against them dropped.

The officers had initially said the injured man Martin Gugino, a peace activist during a Black Lives Matter protest, had tripped and fell but the video evidence says otherwise.

In the video, which quickly went viral, the footage shows Gugino walking up to police officers as they start shouting “Move!” and “Push him back!” while enforcing a city curfew.

Video of the incident, captured by local NPR station WBFO, shows one of the officers bending down toward the man as if to check on him but his fellow officer pulls him back as they continue on their way alongside a crowd of other officers.

There were those at the scene who said the man was simply trying to return a helmet to the officers. Mayor Byron Brown said he was ‘deeply disturbed’ by the video.

Two of the officers seen in the video, Aaron Torgalski and Robert McCabe, had faced second-degree assault charges, but a grand jury that reviewed the cases voted to dismiss them, Erie County District Attorney John Flynn said at a news conference, as per Buzzfeed News.

The officers had denied the charges.

Gugino was taken to the Erie County Medical Center where he was treated for a head injury and loss of consciousness. He was left unable to walk at the time.

He told CNN he was “surprised” that the charges had been dismissed.

“I think there was pressure on (Erie County District Attorney John Flynn) to get at least an indictment, an expectation that the justice system would do something to try to change the direction of the police department, change the reality of the police in the street.

“And I think people are, I think it will happen that people are disappointed that this misfired,” Gugino told CNN affiliate Spectrum News Buffalo.

Flynn said he had no regrets about trying to bring felony charges against the officers.

“I make no apologies for it and, if I had to do it again, I’d do the same thing without any questions about it,” he said.

Meanwhile, the Buffalo Police Benevolent Association said it was “extremely pleased” with the grand jury’s decision.

“As we have stated all along, Officers McCabe and Torgalski were simply following departmental procedures and the directives of their superiors to clear Niagara Square despite working under extremely challenging circumstances,” the union said, as per CNN.

Do you agree with the outcome of this case? Please post your comments below and share this story.