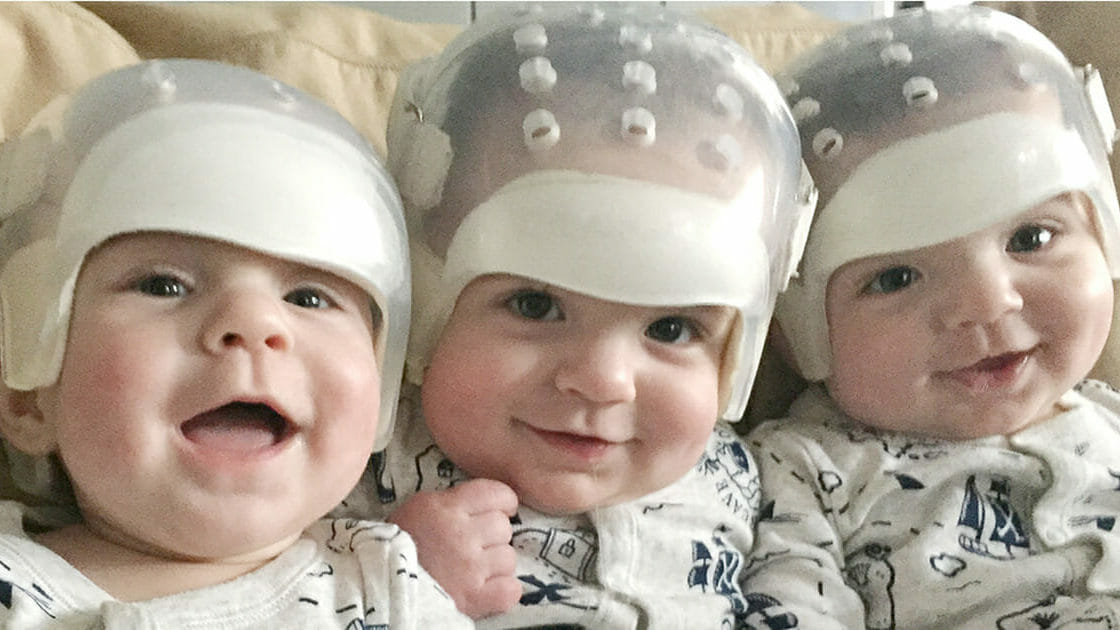 First-time parents Amy and Mike Howard had already received the shock of their lives when they discovered they were expecting triplets.

The couple had conceived the triplets naturally, without IVF, which is highly uncommon.

But when their sons Hunter, Jackson and Kayden finally arrived, it became clear that they were a particularly rare set of siblings.

In fact, their special appearance made them 1 in 500 trillion!

The three bothers were born with the same rare birth defect.

Doctors noticed that Hunter and Jackson, who are identical, had skulls that protuded further than usual at the back of their heads. Their brother Kayden had a pointy forehead, creating a triangular shaped head.

The condition is called craniosynostosis. It’s a very rare condition that causes the bones in a baby’s skull to fuse together too early.

Craniosynotosis only occurs in 1 in 2,500 births, so the fact that all three of these triplets have the condition is extremely rare.

“We worked out the probability of maybe 1 in 500 trillion to see a set of triplets that looked like these three,” neurosurgeon Dr. David Chester tells Inside Edition

Dr Chester explains that the condition has severe consequences if it isn’t treated.

“Your skull is made up of plates, it’s not a single bone. If the seams join together too early, the brain can be put under pressure,” he explains. “That can be detrimental to the brain, the vision, the life of the child.”

He adds: “It’s not imminently life-threatening, but it can cause real consequences down the road.”

And so, when the triplets were just 11 weeks old, they underwent correctional surgery.

“It was really extremely scary thinking about your 8- or 9-week-old baby going through surgery,” the triplets’ mother, Amy Howard, 38, told WCBS-TV.

Mike and Amy waited anxiously over a two day period, as each of their newborns received their operation.

“I was very freaked out,” Mike says. “Any time you have to put a baby in surgery, it’s a little crazy.”

During three seperate surgeries, the surgeons cut out a strip of bone to remove the fused seam in each baby’s skull.

Once again, the siblings made history, as it was the first time that the surgery had been performed on triplets.

Luckily, the triplets were resilient and were back home just 2 days after their operations.

Already the boys are all smiles and full of life.

Kaden is described as the laid back one, Hunter the talker and Jackson is the tough one.

The triplets have been fitted with custom-made orthotic helmets to help mold their skulls into a more typical shape.

“It took them a little bit of time to adjust, but they don’t give me any problems taking them off or putting them back on at all,” Amy explains.

See Amy and Mike talk about the triplets’ surgery in the clip below:

I’m so glad that these surgeries went well and that these adorable triplets are on track to recover well.

Can you believe that these brothers are 1 in 500 trillion siblings? How incredible!

Help us share this story with your friends and family on Facebook to wish these triplets the best of luck in the future.