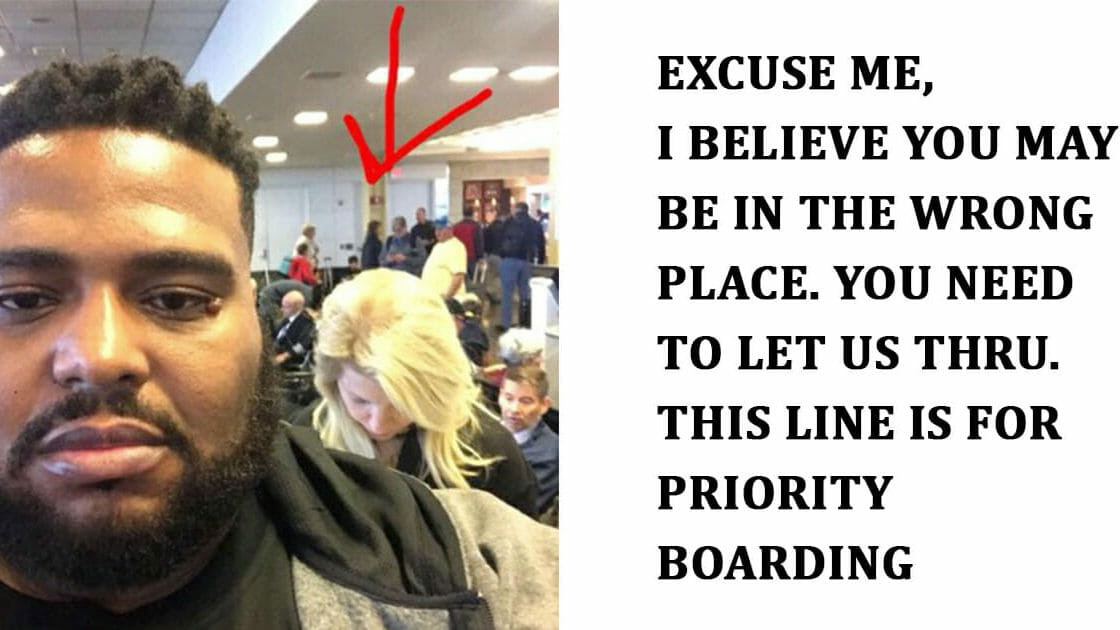 It’s simply deplorable that there remains so much racism in the world today. No one should think they are superior to others just because they have a different skin color.

For many, these events may go unnoticed, but for those who suffer racism it’s a constant presence in their daily life. Some forms of racism are, of course, more blatant than others — and, for that reason, all the more shocking.

This incident in this story is one such example.

Fortunately, social media helps to bring this atrocious behavior to light, and people who are full of prejudice are publicly condemned.

This is the story of Emmit Walker, a music executive who spoke out about a situation he experienced a couple of years ago.

Walker, who works in Washington, was minding his own business, about to board a plane. As he was a first class passenger, he got in the queue with priority boarding. He was traveling to the Dominican Republic for his 37th birthday in December of 2017.

However, behind him was a woman who did not believe that this man could fly first class.

Walker grew frustrated with the woman’s reaction and decided to share their conversation on his Facebook page:

Her: Excuse me I believe you may be in the wrong place you need to let us through. This line is for priority boarding.

Her: Yes…now excuse me, they will call y’all after we board

Me: *shove first class priority boarding pass in her face* You can relax ma’am I’m in the right spot, been here longer, so you can board after me

Her: *still won’t let it go* He must be military or something, but we paid for our seats so he still should have to wait

Me: Nope too big to ever be in anybody’s military. I’m just a n**** with money. (Everyone in line starts to clap)

Emmit’s reply was not only supported by the passengers who were waiting to board, but by thousands of people who later liked and shared the post.

By the time Walker landed at his vacation destination, his upsetting Facebook post had already started to go viral.

There was no doubt that the woman’s actions were unacceptable, but Emmit began to regret his actions even so. He thought perhaps he’d made the wrong call in posting a photo of the woman on Facebook, even though her face is barely visible.

The day after, he posted a video apologizing to the woman.

“The story was definitely real, just like this issue is definitely real, but I now know that I myself should of handled it another way, or left it how it was, and not shared it publicly,” he told The Independent and continued:

“When dealing with people I always try to stay on the side of right; so to make sure I never do anybody wrong, I try to always put myself in that person’s shoes, and ask how would I feel if that person did this to me, and if I was her this morning I would be a total wreck today, and that doesn’t help this situation, or her… It only makes them more angry, and brings more drama…”

Mr. Walker, you are a gentleman!

Racism has absolutely no place in today’s society, this we all know. The idea that anyone is better or worse because of their race or the color of their skin is archaic and nonsensical.

Yet while the vast majority of us understand this, and will stand against racism wherever it rears its ugly head, there remain people yet to adequately evolve.

I’m glad that this man gave the woman a good lesson! Please share this story on Facebook if you agree.