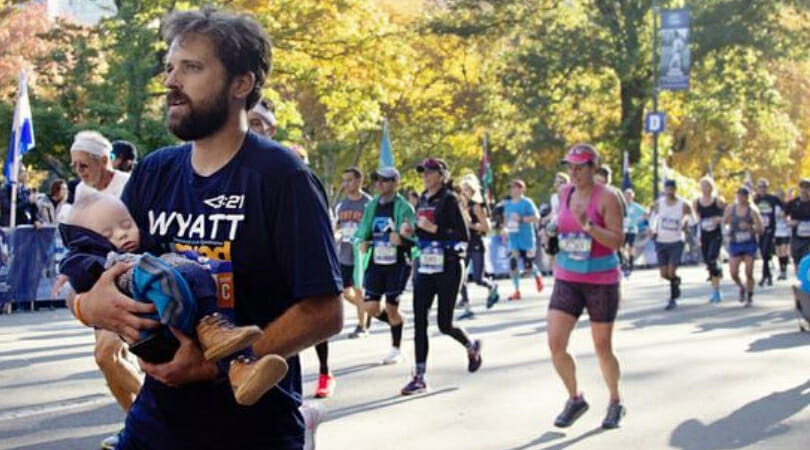 The world is so full of bad deeds and dark ongoings that it’s of vital importance we shed light on those happenings that restore a little faith in humanity.

Which is why we’d like to tell you about Robby Ketchell, scientist, runner, father, and all-round good guy/super hero.

Last year, Ketchell and his wife Marya welcomed their beautiful son Wyatt. Wyatt was born with Down syndrome, prompting his father to run the New York City Marathon to raise funds for other families of children with the condition.

Wyatt was born premature and had to spend almost 70 days in the NICU. All in all, Robby admits there was plenty involved in helping their baby boy to become happy and healthy, including physical and occupational therapy and early intervention. As a result, Robby wanted to give back.

He came up with the idea of running the New York City Marathon in 3 hours and 21 minutes, to represent the three copies of Wyatt’s 21st chromosome. His initial fundraising goal was $3,210, but he far exceeded that, bringing in more than $11,000.

By the time the big day came, Robby had prepared mind and body. Even so, he quickly realized the enormity of the task facing him. By mile 8, he knew he was in trouble. By miles 17 to 20, he knew finishing in under 3:21 would be impossible.

“At mile 20ish, I got down on my knees,” he explained. “My legs felt like they were about to break. That was it. I knew I could walk it in at that point, but I had wanted to give it my all.”

Robby didn’t run the race in 3:21, but he was able to take Wyatt in his arms close to the finish line and carry him over, so father and son completed it together.

“The main thing I want to do is to remind people that it’s not about setting limits on yourself—it’s about pushing past them,” he said.

“That’s a big thing for anyone who has Down syndrome. We struggle with this every day, as people try to limit Wyatt or just see him as a diagnosis.

Sure, Robby didn’t come in under 3:21, but the strength and grit he showed outshines any number on a piece of paper. As per his Twitter, he plans on running the same marathon again this year! We’re sure he’ll ace it.

Share this article if you want to praise Robby and wish he and Wyatt all the best of luck in the future!