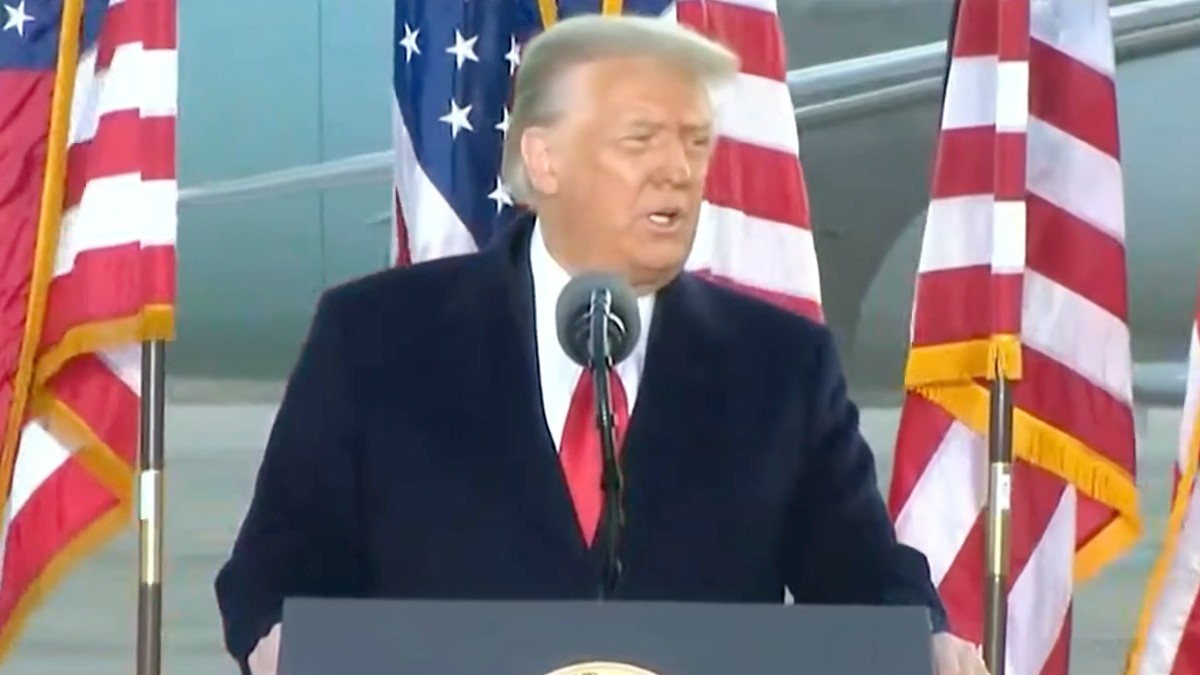 Breaking with tradition, President Trump chose not to attend president-elect Joe Biden’s inauguration and instead held his own farewell ceremony at Joint Base Andrews before he flew to Florida.

With the stage set for what looked like another one of Trump’s campaign rallies, the 45th soon-to-be-ex president delivered his final remarks to the nation.

Despite White House invitations allowing guests to bring up to five people, the farewell event drew only a couple hundred supporters.

One person who was notably absent was Vice President Mike Pence.

Although Trump’s biggest political supporters weren’t there to send him off, it didn’t seem to phase him. Or maybe it did as CNN reported that aides had prepared a speech for Trump, but he rejected it and teleprompters were removed prior to his arrival.

In Trump’s final remarks as the 45th president of the United States he recognized his family, who were in attendance, and called his wife, a “woman of great grace and beauty and dignity.”

According to a CNN poll, this is false. Melania Trump left the White House with the lowest popularity ratings ever.

During the ceremony, Melania thanked the crowd of supporters saying, “Being your first lady was my greatest honor.”

Trump returned to the microphone and briefly summarized his four years in office.

While listing his accomplishments, he took a dig at the incoming administration.

“I hope they don’t raise your taxes, but if they do, I told you so!”

Trump went on to discuss the “China virus” and the impact it had on the economy as well as our progress on developing a vaccine.

“We did something that is really considered a medical miracle,” he said. “They’re calling it a miracle. And that was the vaccine. We got the vaccine developed in 9 months instead of 9 years or 5 years or 10 years or a long time.”

He noted that “those numbers,” presumably the number of positive COVID cases will “skyrocket downward” in the coming months due to the vaccines.

Trump quickly transitioned from the pandemic to the number of votes he received during the 2020 presidential election and called it an “honor” to receive so many votes.

As it appeared he was wrapping up his speech, Trump called upon his supporters to recognize that there was still “a lot” for them to do.

“We’ve done a lot and there’s still things to do,” he said. “The first thing we have to do is pay our respects and our love to the incredible people and families who suffered so greatly from the China virus. It’s a horrible thing that was put onto the world.”

Trump wrapped up his 10-minute speech by telling his supporters that they are “amazing people” and it was his “greatest honor and privilege” to be their president.

While he never specifically mentioned Biden’s name, he wished the new administration “great luck and success” before saying goodbye and telling the nation, “Have a good life. We’ll see you soon.”

As soon as Trump finished, YMCA by the Village People played.

You can watch President Trump’s entire speech in the video below.

What did you think of the 45th president’s final remarks?