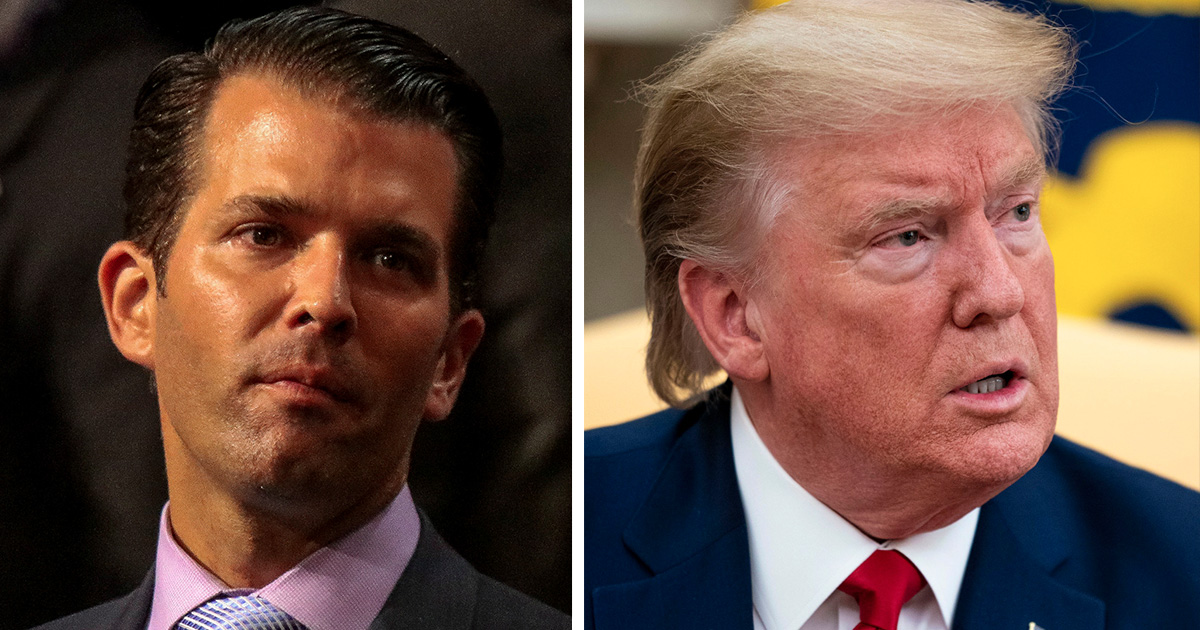 Since then, Trump Jr. went his own way, living in a small trailer before reuniting with his father. Now, he’s close to his father and emerged as one of Donald Trump’s fiercest defenders during his presidency.

So what actually happened to Donald Trump Jr. that put his relationship with his father on the brink?

This is all you need to know!

Just like his siblings, Donald Trump Jr. joined his fathers organization in New York after graduating from university. However, his childhood was quite different from the rest.

Donald Jr. and his siblings Ivanka and Eric hung out plenty, but when his parents divorced, it took a hard toll on him. In fact, his relationship with his father went straight down the drain, and it took a while before they reunited.

Donald Trump Jr. has been a part of the Trump organization for more than two decades, and he played an important part in his father’s presidency, defending him more fiercely than anyone else.

This is all you need to know about Donald Trump’s eldest son!

Donald Trump Jr. was born December 31st, 1977 in New York City. He was welcomed by parents Ivanka and Donald Trump the same year they got married, but his childhood wasn’t what every kid would want.

Sure, Donald Trump Jr. was born into a home of great wealth: Donald Trump at this point was emerging as one of the big real estate moguls on Manhattan. His father Fred Trump focused on the real estate in the outer boroughs in New York City, while Donald got the big island, full of huge buildings and skyscrapers.

Even though there was a huge financial risk in entering the real estate and construction market in Manhattan, Fred took the chance. And it turned out pretty good.

“It was good for me,” he said. ”You know, being the son of somebody, it could have been competition to me. This way, I got Manhattan all to myself!”

Donald Trump was extremely busy during this time. As a result, he spent a lot of time with his mother Ivana, but even she was very busy. Therefore, Trump Jr. spent much of his time with his maternal grandparents in the Czechoslovakia during the summers.

He loved to go fishing, boating and hunting alongside his grandfather, and since then “Donny” has learned to speak fluent Czech.

Donald Trump was doing plenty, but Ivana was a part of the Trump empire as well. During the couple’s 14-year marriage, she was the designer of the interiors at the Grand Hyatt Hotel and Trump Tower, as well as president and CEO of Trump Castle and also president and CEO of the Plaza Hotel.

However, she wrote in her memoir Raising Trump that she always took the time to be with her children. In 1981, Don’s sister Ivanka was born and three years later Eric arrived.

“No matter how busy I was, I had breakfast with my children every day. I sat with them at dinner every night and helped them with their homework (I loved algebra) before going out in a Versace gown to a rubber-chicken charity event,” Ivana wrote in her memoir.

Money wasn’t a problem for the Trump family, with Ivana and the children living in a triplex penthouse in Trump Tower, which had around 50 rooms. They also had their own Boeing 727.

When Donald Trump Jr. was about 12 years old, his parents got a divorce. Ivana ended up getting a $25-million payout, $10 million of which was in cash, and she also got custody of the three children. However, Donald remained a part of their lives.

Even thought Donald Trump was very much involved in Donald Trump Jr’s and his siblings life, Ivana stated that she was the one responsible for the kids having a great childhood. According to her, she raised them with the right values and morals.

In addition, Ivana says that she made all the decisions about their education, travels, allowances and child care.

The divorce was very public, and Donald Trump Jr. was in the middle of it. Trump had an affair with model Marla Maples – the future second-wife of Donald Trump. Speaking to New York Magazine in 2004, Trump Jr. that he blamed the divorce on his father at the time. He didn’t speak to Donald Trump for over a year.

However, when thinking back on it, Donald Trump Jr. said that he may have been “manipulated” into thinking it was his father’s fault by his mother.

“Listen, it’s tough to be a 12-year-old. You’re not quite a man, but you think you are. You think you know everything,” Trump Jr. said. “Being driven into school every day and you see the front page and it’s divorce! ‘THE BEST SEX I EVER HAD!‘ And you don’t even know what that means.”

Alongside his siblings Ivanka and Eric, Trump Jr was sent to the boarding school the Hill School in Pottstown, Pennsylvania. According to Vanity Fair, this was to remove them from “New York society scene.”

“How can you say you love us?”

But before they left, Donald Trump Jr. had some well-chose words for his father, blaming him for the ugly divorce.

“How can you say you love us?” the 12-year-old Trump Jr. told his father, according to a 1990 Vanity Fair article. “You don’t love us! You don’t even love yourself. You just love your money.”

Donald Trump Jr. got time for himself and spent much time in the nature. All the things surrounding his parents and the divorce went away, and most importantly, he then decided that he was not going to measure himself against his father.

“I think people are often surprised, but I never defined myself as, ‘I’m the business guy who has to supersede what my father has done,’ ” he told the New York Times. “He’s a totally unique individual. Somehow having to top his accomplishments is never the way I perceived things.”

Trump Jr. spent plenty of time with his grandparents in Czechoslovakia. And there, he found his true role model. It wasn’t Donald Trump, but in his maternal grandfather, Milos Zelnicek.

He worked as an electrician and loved the outdoors, and when Trump Jr. visited during a couple of months each summer, they always had great fun.

According to Ivana it was important that her son found a great role model in his “grandpa.”

“He needed a father figure,” Ivana told the New York Times in a telephone interview. “Donald was not around that much. They would have to go to his office to say hello to him before going to school.”

Following boarding school, Trump Jr. attended Wharton School at the University of Pennsylvania, just like his father. But after graduation, he didn’t do what his younger brother Eric did. Instead of joining his father’s organization, Trump Jr. decided to move to Aspen, Colorado, where he lived out of the back of a truck and doing small bartending gigs to support himself.

He lived off the land, hunting, fishing and camping. And according to Vanity Fair, he stopped talking to his father during his Colorado journey.

“I know that the benefits I got from being in the woods, from being in a duck blind, from being in a tree stand at 5 o’clock in the morning, kept me out of so much other trouble I would have gotten into in my life,” Trump Jr. said in a speech at a 2016 fundraiser, as quoted by People.

At one point however, Trump Jr. decided he had had enough. In September of 2001, he moved back to New York City to join the family business full-time.

“I had a great time,” he told New York Mag, “but your brain starts to atrophy.”

Donald Trump Jr. quickly climbed the ranks inside the Trump Organization, being named the executive vice president. His first big project was the Trump Park Avenue, but one again, he’d clash with his father. Donald Trump wanted golf doorknobs, however his son rather wanted something else, as reported by The Washington Post.

Following the completed project, Trump Jr. actually joked with his father, asking him to put “Trump Junior” on the facade. However, Trump senior refused.

Their relationship continued to be rather bad, however. Once, Trump publicly criticized his son at the time, saying on CNN’s Larry King Live: “You have a name that is hot as a pistol, you have to be very careful with things like this.”

In 2004, Donald Trump Jr. met his future wife, formed model Vanessa Haydon, at a fashion show. However, it wasn’t a smooth meeting.

Speaking to the International Herald Tribune, as quoted by NY Times, Vanessa says Donald Trump introduced the party twice in just five minutes. And when they met a month later, she said that he was the one with “the retarded dad”.

Vanessa and Donald Trump Jr. fell in love. They tied knot at Trump’s Mar-a-Lago estate in 2005 in front of 370 guests, and afterwards, the couple headed to Fiji and Mexico for their honeymoon.

“I’m a Mother of 5 amazing kids. My children are my life!,” Vanessa’s Twitter bio reads.

However, their love story came to an end in 2018, when Vanessa filed for divorce.

“After 12 years of marriage, we have decided to go our separate ways,” the couple said in a joint statement. “We will always have tremendous respect for each other and our families. We have five beautiful children together and they remain our top priority. We ask for your privacy during this time.”

Donald Trump Jr. went his own way after graduating, figuring out what he really wanted in life and not jumping into anything that he wasn’t sure about. That, if anything, is something we find really inspiring.

Do you think Donald Trump Jr. should follow his dad into politics? Please give us your opinion in the comment section.

Meanwhile, please share this article with friends and family!