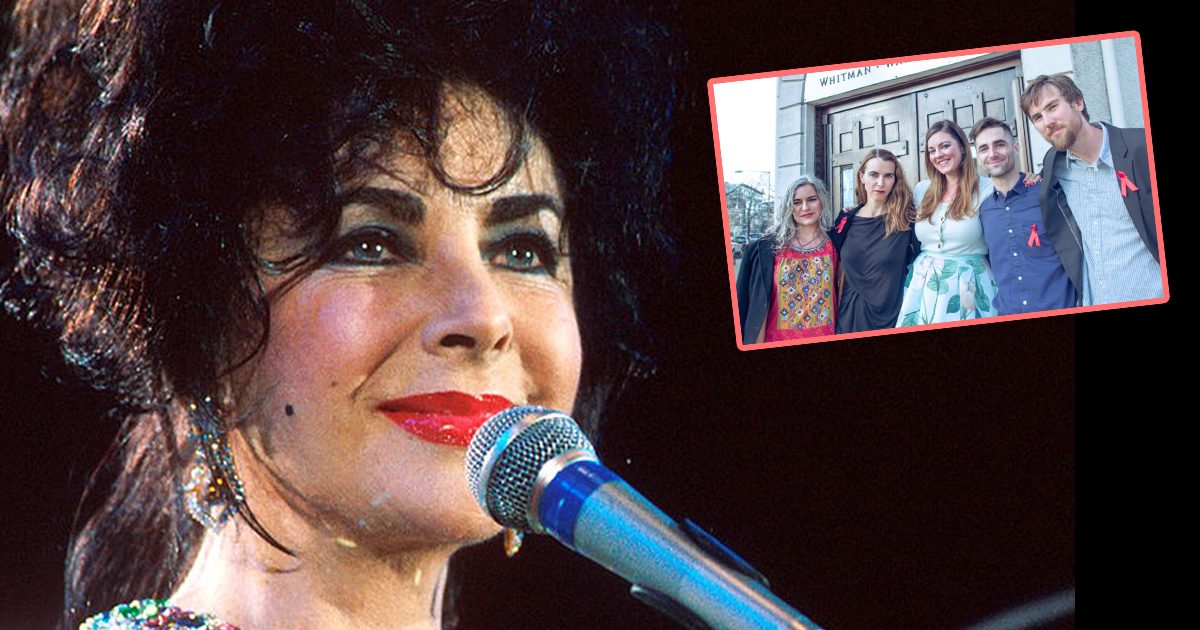 The celebrated movie star Elizabeth Taylor had an astonishing career, covering more than six decades. She had a well-spoken and widely reported personal life, with the star being married eight times. She had four children, and today, her ten grandchildren are all grown up.

We’ve seen pictures over and over again of celebrity children looking precisely the same as their parents. It practically looks like they could be sisters or brothers in some cases.

But celebrities from the 20th century don’t just have children. Now, many have had grandchildren, and some of them really look like their grandparents.

Did you know that the late Elizabeth Taylor, one of the most iconic actresses of all time, has some of her grandchildren looking exactly like her?

But as much as she was successful in her work, Taylor’s personal life often was described as “scandalous.”

Celebrated actress Elizabeth ”Liz” Taylor had an astonishing career that spanned more than six decades. But as much as she was successful in her work, Taylor’s personal life often was described as “scandalous.”

She was married eight times to seven men, wedding Richard Burton twice, and gave birth to four children: Michael Wilding Jr., Chris Wilding, Liza Todd, and Maria Burton. All of her children grew up and formed their own families so that Liz would be blessed with ten beautiful grandchildren and four great-grandchildren.

However, the iconic actress suffered greatly during the last years of her life. She’d had injuries, scoliosis, and skin cancer and endured more than 30 surgeries, according to ABC News.

In 2011, Taylor was admitted to the Cedars-Sinai Medical Center in Los Angeles for congestive heart failure. She passed away six weeks later, on Mar. 23, 2011.

Before passing, Taylor had the blessing of having her kids and grandchildren over at her mansion in Bel Air, Los Angeles. Today there are ten of them, with many working hard to keep Taylor’s legacy alive – so let’s meet all of them!

Laela Wilding is the daughter of Elizabeth’s first child, Michael Wilding Jr. She was born in 1971 and now works as a graphic designer and yoga instructor in Portland, Oregon.

Like many of Elizabeth’s grandchildren, Laela has spoken fondly of her late grandmother in several interviews.

“She would look at you with a sidelong glance and say, ‘Oh honey get me the scissors.’ And she would start with a little snip here a little snip there. She was very artistic. She had a great eye,” Laela recalled.

Naomi deLuce Wilding was born in 1976 and is five years younger than her sister Laela Wilding. Today, Naomi works at the Wilding Cran Gallery in Los Angeles – which she founded in 2014 together with her husband, Anthony Gran. Just like her older sister, Naomi also works closely with the Elizabeth Taylor AIDS Foundation.

“She had an idea that she was responsible for raising the younger generations in the family, you know,” Naomi said about her grandmother. “It was important to her that she instilled those values in us, too.”

Even though she didn’t experience Taylor as an actress, she always looked up to her grandmother.

”I remember sitting on the floor of her dressing room and just watching her get ready — just [watching] this sort of transformation unfold. Just because somebody is a superstar doesn’t also mean that they can’t be a loving, squishy, delicious grandma who was always welcoming us in,” Naomi told Today.

Not much is known about Caleb; he enjoys his life outside the spotlight and is reportedly a fan of motorcycles.

Andrew Wilding was born in 1984 and is Elizabeth Taylor’s second grandson. Unlike his brother Caleb, Andrew followed in his grandmother’s footsteps and pursued a career in the entertainment industry. He has worked as an actor in several productions.

However, Andrew has often chosen to stand behind the camera and is most known for his work as a cinematographer and producer.

Tarquin Wilding was born in 1989 in Los Angeles, California, USA.  He is Laela and Naomi’s half-brother and the seventh of Taylor’s grandchildren.

Inspired by his famous grandmother, Tarquin decided that he wanted to become an actor. He’s best known for appearing in Silent But Deadly (2012), Shameless (2011), and In Between (2009).

According to himself, Tarquin is an aspiring filmmaker who loves dogs and motorcycles. Like many of Taylor’s grandchildren, he is also involved in the Elizabeth Taylor AIDS Foundation.

”My grandmother was a total badass! I can’t help but be inspired by her unbreakable courage, and boundless generosity. I want to continue her legacy, and be a part of the fight towards securing a better future for those living with HIV/ AIDS, and to one day see an AIDS free generation!”

Born in 1991, Lowell Wilding is the son of Christopher Wilding and his second wife, Margaret Carlton. Today, Lowell is keeping his grandmother’s legacy alive by working on the Elizabeth Taylor Archive.

He is also an ambassador for her AIDS foundation.

“I was always in total awe of the good my grandmother was able to accomplish in her lifetime. She could so easily have done nothing, like so many others. Instead she fought, she cared, and she worked for people suffering with HIV/AIDS. I hope to do whatever I can to preserve and continue that legacy,” he said.

Quinn Tivey is the son of Liza Todd, the third child of Elizabeth Taylor, and Hap Tivey. He was born in 1986, but on the contrary to his grandmother, he didn’t grow up on the west coast.

Quinn worked as a busboy and server at a steak house restaurant called The Quarry in Hudson Valley, New York. He later studied film at the University of Southern California, and also holds an MFA from the School of Visual Arts. In his application to USC, he decided not to drop his grandmother’s name, according to NY Post.

He later would work on the 2010 film The Company Men as an assistant in a movie that starred Ben Affleck. It turned out hat Quinn grew up to be an artist. He recalls growing up, admiring his beloved grandmother.

”I always knew her as grandma, but in her real life, she was still larger than life,” he said in 2019, according to The Morning Show. ”She was an amazing matriarch.”

In an interview with The Hollywood Reporter, he spoke highly about his beloved grandmother as just a grandmother, not the legendary actress Elizabeth Taylor.

“We would lay in bed together, watching movies, chatting — she would give me advice. Those are some of the ways I remember her most,” Quinn said.

Quinn and his grandmother Elizabeth Taylor lived very different lives. However, there is one thing that they definitely shared. Their looks.

You can clearly see the resemblance between grandson and grandmother!

Rhys Tivey is the ninth of Taylor’s grandkids.

He was born in 1991 and grew up in rural upstate NY together with his parents, Happy Tivey and Liza Todd. Today, he works as a trumpeter, vocalist, and songwriter. Rhys is, of course, also an ambassador for his grandma’s AIDS foundation.

”Without concern for color, culture, or class, my grandmother would acknowledge the soul of every person she met and treat them with great respect. And yet she was never afraid to call out BS if she picked up on it. To reach the level of power and success she did and maintain a genuine concern for others’ wellbeing is truly admirable, and her legacy in the fight against HIV/AIDS embodies that humanitarian passion. Every day, I am inspired by the encouragement she gave me and so many other people,” Rhys says.

Elizabeth Carson may not be Elizabeth Taylor’s biological grandchild, but her grandmother loved her just as much as her other grandkids. Born in 1982, she was named after her grandmother.

Elizabeth Carson is the daughter of Taylor’s adopted daughter, Maria Burton. She has warm memories of the glamorous Hollywood icon and her namesake.

”For my junior and senior prom, she did my hair and makeup,” she told Town & Country. “Once, while we were discussing makeup, I told her we should go to Sephora, which turned out to be a terrible idea. We had fun for the first 15 minutes, but then she was recognized, and we quickly had to be escorted out.”

Today, Carson works as a social worker in New York and she’s also an ambassador for the Elizabeth Taylor AIDS Foundation.

“I work for the Department of Child Protection in New York City, and, I have to say, whenever I hear of a baby born from an HIV+ mother test negative because of advancements in medication and prevention, I am literally brought to tears. I often say a silent thanks to my grandmother because if not for her and other advocates with her shared passion, this may not have been the case today.”

Richard McKeown is the son of Maria Burton and the youngest of Taylor’s grandchildren and final grandson.

Not much is known about him, but it looks like he had a pretty shaky moment in his childhood when his mother filed a restraining order against Richard’s father.

Please, share this story with friends and family to honor the life of Elizabeth Taylor.