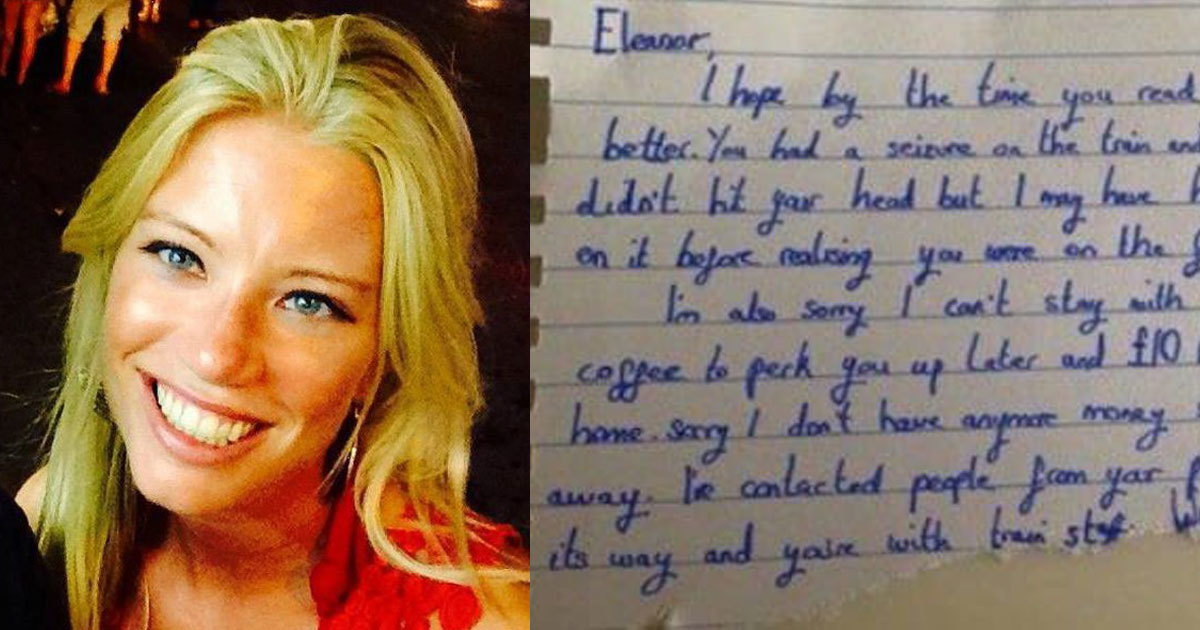 On an ordinary day one year ago, 27-year-old Ellie Farnfield from England experienced something rather unusual – and certainly heartwarming.

The story begins rather badly – Ellie was traveling alone on a train in London when she suddenly had an epileptic seizure and fell to the floor. When Ellie woke up, she found herself alone in a hospital.

Beside her lay a handwritten letter from a stranger.

Ellie was stunned by what the note said. It was signed by a man named Tom, a complete stranger.

Here’s what the note said:

I hope by the time you read this you are feeling better. You had a seizure on the train and I took you off. You didn’t hit your head, but I may have hurt your leg as I walked on it before realizing you were on the floor having a fit! Sorry!

I’m also sorry I can’t stay with you now, but here is a coffee to perk you up later and £10 to make sure you get a taxi home. Sorry, I don’t have any more money, so I hope you don’t live far away. I’ve contacted people from your phone and medical help is on its way and you’re with the train staff. Wishing you all the best and a quick recovery.

Ellie was moved by the stranger’s kind deed and knew she wanted to try to find him. She posted the letter on Facebook – and it wasn’t long before thousands were sharing it, in the hope of helping Ellie find her elusive rescuer.

“‘Everyone thinks Tom is great. There has been lots of speculation about who he might be, what he does, what he looks like, and friends “shotgunning” him as their future boyfriend,” Ellie told the Daily Mail following the incident.

A spokesman from Southern, the train operator that runs the train Ellie boarded, could only agree that Tom is a real hero.

“What this mystery man Tom did just goes to show how thoughtful and kind-hearted many of our passengers are.”

So what happened next, you’re wondering… Did Ellie find her train hero?

It has now been one year since the incident and the hashtag #findtraintom continues to circulate on social media. Ellie’s rescue story has also reemerged in maintsream media. But so far, Tom is yet to be found. Perhaps has he chosen to remain anonymous – or perhaps news of Ellie’s search hasn’t reached him.

That’s why I’m spreading the news again, and this time, I really hope Tom sees it and comes forward! He deserves plenty of praise for his sweet reaction to Ellie’s predicament!