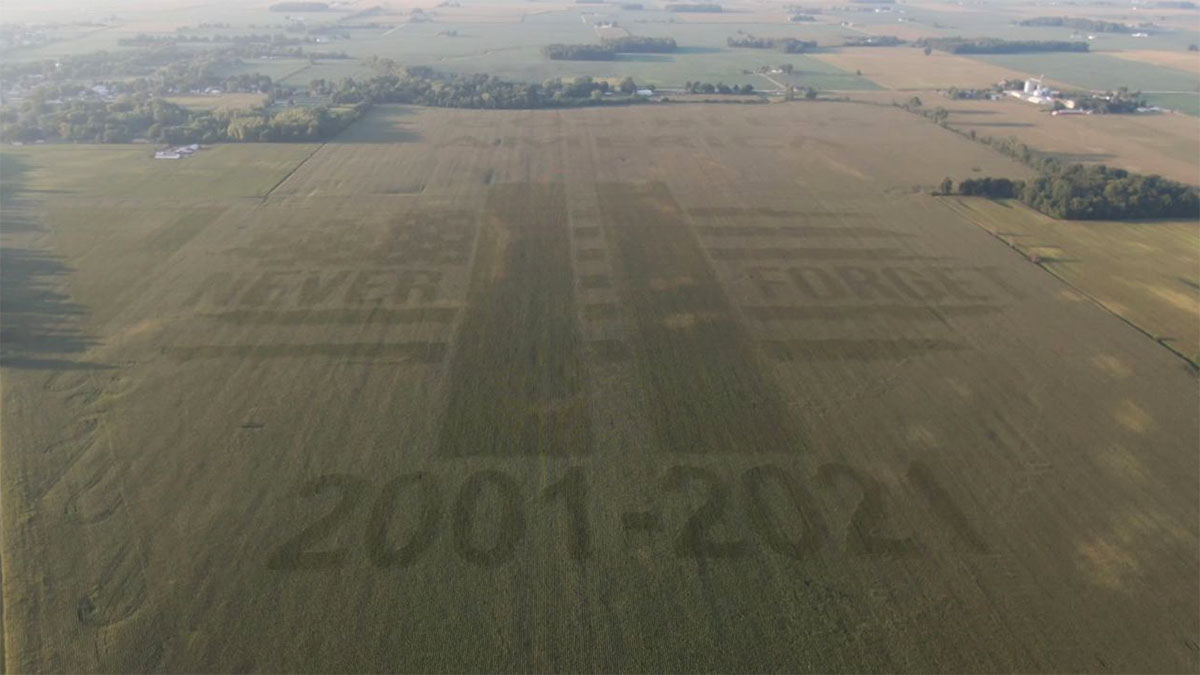 This year will mark 20 years since the single deadliest terror attack in human history.

On September 11, 2001, the world watched in horror as two planes crashed into the World Trade Center killing almost 3,000 people and injuring 25,000.

More than 400 firefighters and police officers lost their lives in the catastrophic event and first responders are still dying of 9/11-related illnesses.

One former first responder who is now a farmer wanted to do something to honor those who ran toward danger to help others and ultimately gave their lives that day by creating a beautiful tribute.

Wilbur Meyer, who is a soybean farmer near Verona, Ohio, planted a mural in his field which reads “God Bless America” and “Never Forget 2001-2021” with the American flag behind the words.

Meyer had the idea to plant crops in the shape of a mural in April – a fitting tribute to the fallen first responders and victims of Sept. 11, 2001.

“Being a first responder in the past, it’s just a fitting tribute for everybody,” Meyer told Spectrum News. “This is our biggest field ever. It’s a 270-acre field, and the mural is 3,500 feet tall by 2,800 feet wide.”

The farmer had help to create the massive undertaking calling on friends Grant Davis and Dave Kress to help with the design and selecting the correct corn variety for the mural.

Despite the size of the mural there was very little room for error.

“These plants change. I mean you look behind me back here in the corner and this is all one hybrid and you’ll see yellow corn plants, dark green corn plants and we’re trying to do something that no one’s ever really done,” said fellow farmer Dave Kress.

“So if he’s planting five miles per hour one way, and come back say … just say four and a half, you’re going to see that variation in that picture across the field,” he added.

U.S. Marine veteran and founder of Massey Green AVP, John Massey was able to capture the tribute in its entirety using their best drone pilot and shared it.

Meyer said he wants the crop mural to remind people to remember those who sacrificed their lives to save others.

“I want them to think about back then, you know what happened afterward. The country came together as one nation. Don’t forget the people who have lost their lives in that tragic accident, between the Pentagon, the towers, the flight that went down in Pennsylvania. Remember all those people,” said Meyer.

Such a beautiful tribute to remind us of the sacrifice that hundreds of people made.

Please share so more people can see this breathtaking mural.