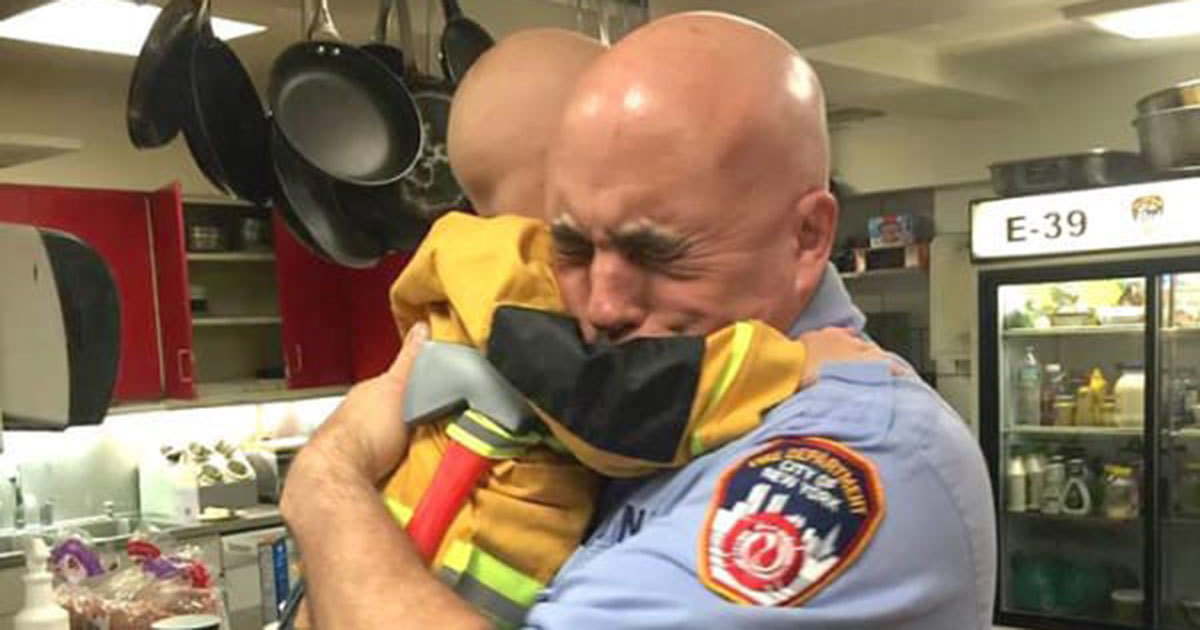 Trucker Dukes is a brave, little 3-year-old boy who’s fighting a battle that no one should ever have face. When he was just 19 months old, Trucker was diagnosed with aggressive neuroblastoma, a childhood cancer of the sympathetic nervous system. Shortly after, Trucker and his mother, Shauna Dukes, began traveling back and forth from their home in Hawaii to New York City, where Trucker received specialized treatment. Trucker, who has always loved firefighters—his father, Joshua Dukes, is a firefighter back in Hawaii—had long dreamed of meeting the famous firefighters of New York City Fire Department. And one day, when firefighters were visiting Ronald McDonald House, where Trucker was recovering from his treatment, fire chief Jim Grismer approached the boy. The two immediately hit it off and soon Trucker was buddies with the entire station. “In a lot of ways, this journey has restored my faith in humanity,” Shauna Dukes told Little Things. Scroll down to learn more about how these good-hearted firefighters have helped Trucker stay cheerful as he fights the fight of his life.

Trucker Dukes isn’t yet 3-years-old, but he’s already been through a lot in his first years of life. When he was only 19 months old, this happy little boy was diagnosed with a severe form of a cancer called neuroblastoma.

Shortly after, Shauna Dukes began to shuttle her little boy back and forth between his home in Hawaii and a specialist hospital in New York.

Trucker’s father, Joshua, wasn’t about to go to the hospital often because he works as a firefighter at home in Hawaii. Nevertheless, it’s crystal clear who Trucker’s idol is—his dad. As long as anyone can remember, Trucker has loved firefighters.

One day, fire chief Jim Grismer visited Ronald McDonald House, where Trucker and mom, Shauna, were staying during Trucker’s treatments. Jim sat down beside Trucker and they instantly hit it off.

“I see this little boy excitedly walking towards me with his eyes aglow. I opened my arms and he basically climbed up and hugged me around the neck. It was as if we’ve been friends/brothers for years,” fire chief Jim told the Huffington Post.

Since the first meeting, Trucker and the team of firefighters have quickly became good friends. Trucker celebrated his third birthday at the station, along with his heroes.

When a photo of Trucker and the firefighters spread across social media, the New York City Fire Department decided they wanted to do something special for the boy.

On May 31, during a special ceremony, they will swear Trucker in as an honorary New York City firefighter.

Although Trucker has been through several rounds of chemotherapy and had tumors removed from both his brain and stomach, he keeps his hopes up—with thanks to his close relationship with the firefighters, who help make Trucker’s days a little brighter.

“He really feels like a firefighter because they make him feel like one. It’s been amazing,” said mom Shauna.

“Trucker is so much braver than I am. All these kids fighting cancer are so amazing! Even though they feel like junk most of the time they usually have a smile on their face and all they care about really is playing. They are sick kids, but they are still kids and are little warriors!”

Mother Shauna urges parents who are in the same situation to never stop believing in their children.

“To other parents, I would say never lose hope and enjoy every moment because one day at a time is all any of us have really,” she said.

Little Trucker has certainly had a tough start to life, but through the support of friends, hospital staff, family, and firefighters on his side, this strong-willed 3-year-old is in the best position to get through this.

Thanks, firefighters! You’re all heroes!

If you’re impressed with the good work that the New York City Fire Department is doing to brighten Tucker’s life, please share this article to show your appreciation!
Published by Newsner, please like