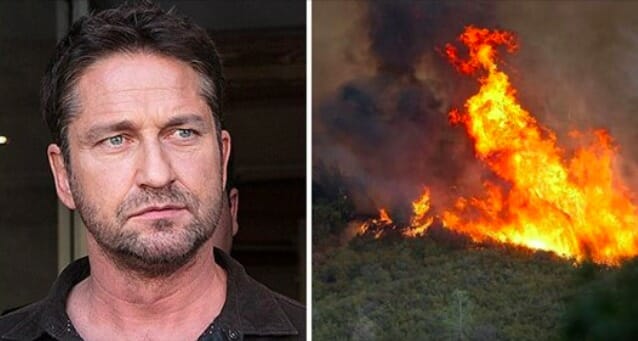 Wildfires throughout California over the last few days have created some unprecedented devastation. The rapidly spreading wildfires have destroyed various parts of the state and forced thousands out of their homes.

At least 31 people have died, the vast majority in the Northern Camp fire, which has been recorded as one of the deadliest in California’s history.

Countless Californians have since been taking to social media to document the devastation, or plead for support from the public. These include Hollywood stars, such as Gerard Butler — who lost his home in the fires.

Fires ravaging parts of California are terrifying and show no sign of easing. Emergency personnel, with brave firefighters on the front line, are working day in and day out to try to mediate the situation as much as possible.

Despite this, only about 15 percent of the fire can be described as ‘contained.

I don’t remember ever being so scared watching a video on the internet. These California fires are beyond terrifying. Posted by @OmarBaddar pic.twitter.com/qEs5V9uw5t

Gerard Butler is among those who has shared his story and thoughts on social media — and asked for everyone out there to lend a supportive hand in any way they could.

But the Scottish-born actor has also been among those who lost their homes in the violent blazes. He shared a photo of his burned-down property, writing:

“Returned to my house in Malibu after evacuating,” the P.S. I Love You actor tweeted. “Heartbreaking time across California. Inspired as ever by the courage, spirit and sacrifice of firefighters. Thank you @LAFD. If you can, support these brave men and women at http://SupportLAFD.org.”

Other actors have reportedly also lost their homes in the blazes, including Miley Cyrus, Neil Young, Robin Thicke, Camille Grammer, and Shannen Doherty. The stars also turned to social media to post updates.

Sadly my house couldn’t be saved. The courageous firefighters were able to save my cars and personal items recovered from my home. I thanked the fire chief and his team of firemen for all of their hard work. He took the time to explain what happened and I’m grateful for all of their hard work trying to save my home. Sad we lost our home but grateful that my family is safe. Luckily we quickly evacuated our house yesterday after a patrol car drove up the street announcing mandatory evacuations. I’m grateful for my lovely neighbors and friends who kept me informed and for their help this evening. ? Thank you all for caring ? #woolseyfire #malibu. Special thanks to Fire Chief Rash and his brave team of firefighters. ?

Singer Robin Thicke posted a picture of what used to be his house, writing:

“April, Julian, Mia and I would like to thank the courageous firefighters and volunteers. As we drove to safety, they risked their lives trying to save our home. We are safe and surrounded by friends and family. We Thank you for all the love and support we’ve received and we send our love and prayers to everyone affected by the fires. Count your blessings!”

Canadian legend Neil Young also lost his home to the forest fires — for the second time, while Shannen Doherty wrote that her “heart is ripped apart” after losing the home where she married her husband in 2011.

Thank you @shanepaish for the beautiful makeup yesterday and thank you to the sun that was perfectly shining on the white trailer in front of me which acted as the most brilliant bounce card and perfect lighting. Currently trying to position myself only in front of large white walls from now on. #su2c

To help with relief efforts, you can donate to the American Red Cross at redcross.org or texting REDCROSS to 90999. The Los Angeles Fire Department Foundation, which supports first responders on the frontline, is also accepting donations at this time.

I think we all need to share this to show our support for everyone affected by this tragedy. Our thoughts and prayers are with California.