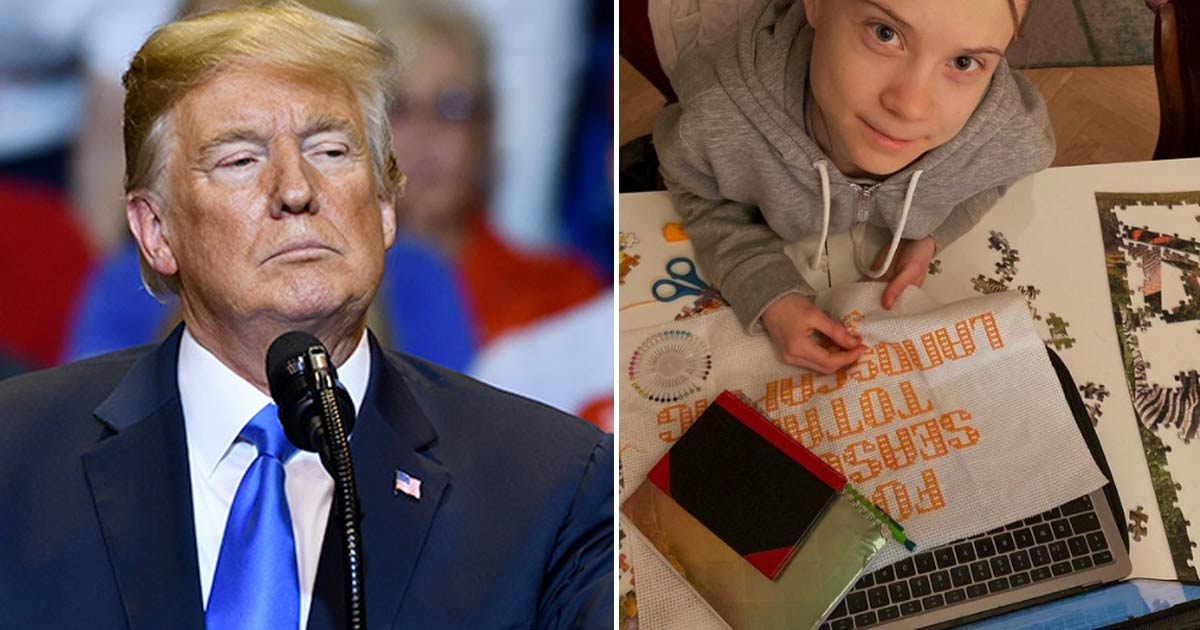 When Donald Trump stood ready to board the Marine One helicopter and waved goodbye in his last appearance as US President, climate activist Greta Thunberg mocked Trump as she referenced a tweet he posted about her more than a year ago.

Now, Greta Thunbergs strikes again. In a post on Instagram, Greta is seen sitting with an embroidery that reads: “Four seasons total landscaping. This is the same place where Trump held a press conference after losing the presidential election.

It was in September 2019 that the dispute between Greta Thunberg, 18, and the former US President Donald Trump started.

Donald Trump tweeted a link to a TV clip showing an emotional Greta Thunberg. He wrote the following:

“She looks like a very happy young girl who is looking forward to a bright and wonderful future. So nice to see.”

“A very happy young girl looking forward to a bright and wonderful future,” showing all her followers that she would have the last word.

The most savvy response

Later, when Donald Trump left the White House for the last time in January 2021, climate activist Greta Thunberg had the most savvy response for the outgoing president.

The 18-year-old Swedish environmentalist wrote on Twitter: “He seems like a very happy old man looking forward to a bright and wonderful future. So nice to see!

Trump responded back and his comments were met with a barrage of criticism with many objecting to him attacking a child who is trying to save the planet.

Actress Mia Farrow tweeted: “Mocking any kid is disgraceful. What an awful example you set. Apparently it bothers you that she represents many millions of children throughout the world – demanding their rightful future.”

Now, Greta Thunberg has a new savvy response to the former President of the United States, Donald Trump.

During the pandemic, the climate activist has often been interviewed digitally, via video. This has lead to many viewers noticing that her arms and hands are moving, according to the Swedish newspaper Expressen.

”Some of you have been asking what I’m doing with my hands during online interviews etc,” Greta Thunberg wrote on Instagram. She continued:

“So, well… this is what is going on behind the camera while I’m doing interviews, panel discussions, meetings and online classes on my school computer. My hands and mind want to keep busy…” says Greta, followed by a picture of her and an embroidery.

If you look closely at what Greta actually embroiders, you can guess that the text says the following: “Four seasons total landscaping.”

On the day the election results for Pennsylvania and other states were released in November, Trump’s campaign announced a surprise press conference at the Four Seasons Hotel in Philadelphia.

Donald Trump tweeted that his group of lawyers, led by attorney Rudy Giuliani, were going tell more about how Trump was going win the election with the law as their weapon.

Press conference on a parking lot

“Big press conference today in Philadelphia at Four Seasons Total Landscaping – 11.30am!” the president tweeted at 9.45am, according to The Guardian.

The Four Seasons Hotel Philadelphia distanced itself from both the campaign and landscaping company.

No one knew if this was actually planned or just a mix-up with the luxury Four Seasons hotel near Broad Street and the parking lot outside. No one could figure out if Trump even knew what was happening.

But what’s clear is that Greta Thunberg saw her chance to once again to respond to Trump – while showing off her embroidery to her millions of followers on Instagram.

Greta Thunberg’s post on Instagram has received over 400 000 likes. “Excellent”, “Well done”, “You are incredible” and “Busy hands, busy mind”, are some of the things people are writing.

This Swedish superstar is proving over and over that nothing can deter her from her mission to prompt world leaders to enact meaningful climate change policies.

What do you think about her latest response to Donald Trump? Let us know your opinion in the comments box.