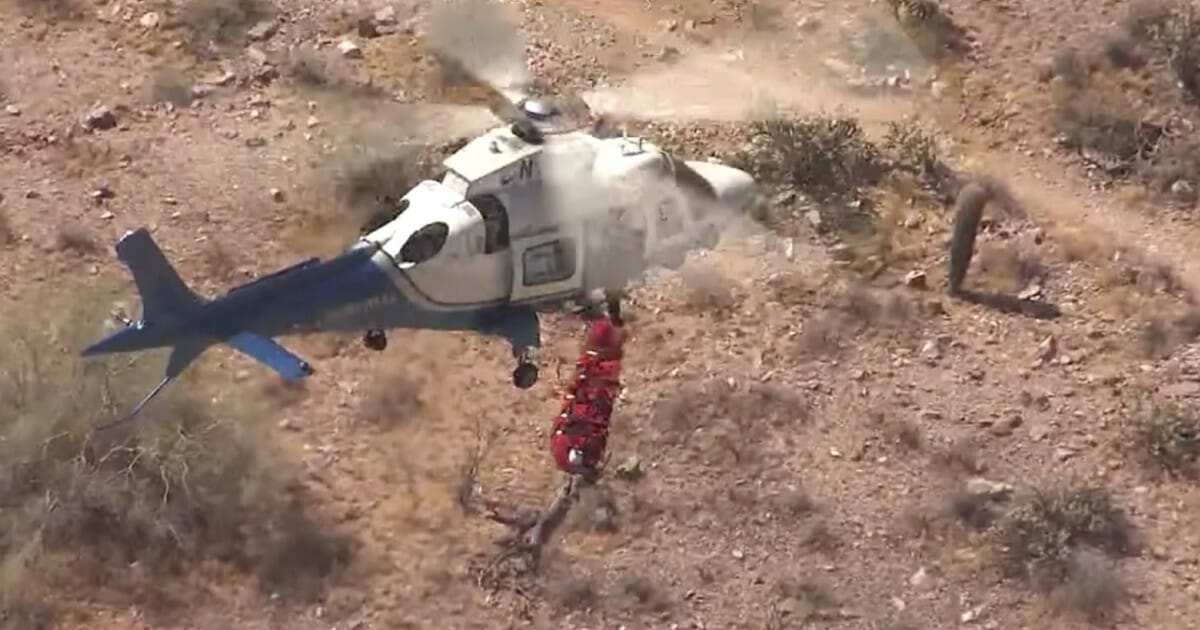 What should have been a routine helicopter rescue went a little haywire Tuesday after a basket hoisting an injured hiker to safety began to spin out of control.

Tuesday morning rescue crews responded to the scene at Piestewa Peak in Phoenix after a woman in her 70s fell and hit her head. Crews used a bag and basket that is typically used for these types of rescues, but as seen in the terrifying footage of the rescue, things did not go as planned.

“Sometimes if we’re in a canyon, it’s a strong windy day, it will spin on us,” chief pilot Paul Apolinar said during a press conference. “It’s not something that happens very often, but sometimes it just does. And when it does, we’re trained to take care of it.”

This phenomenon is something the department has encountered only two times out of 210 rescues over the course of six years.

There is a line attached to the hoist to prevent the spin as the basket is pulled up towards the helicopter, but that line broke. Rescue crews made several attempts to alleviate the spinning, but found it extremely difficult.

“Once we got the forward flight, the spin got quite a bit less to where they were safely able to bring the patient up to the aircraft,” said the pilot in command of the rescue, Derek Geisel.

Phoenix Fire Captain Bobby Dubnow added that while the footage looks terrifying, the injured hiker was secure the entire time.

“She has multiple points of packaging and connections all over her body.”

Once the woman was safely onboard she was transported to a nearby trauma center, according to FOX 10.

“Reports from the hospital are that she is stable and she had no ill effects from the spin,” Dubnow said.

Watch the press conference in the video below:

Officials said that despite the nauseating spin, their choice to use a helicopter was the right decision.

Wow! What a ride this poor woman had to endure!

Luckily it’s said that she suffered no injuries from the spin and was able to be treated with some medication to stop the dizziness.