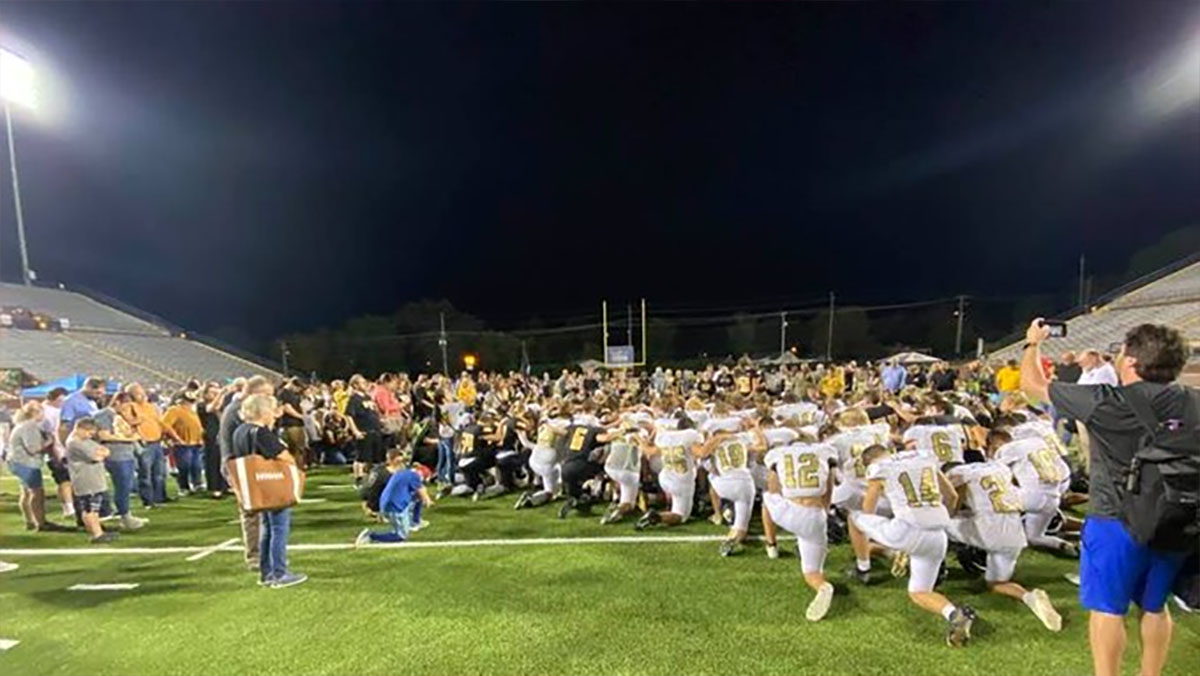 Parents and pupils defied school officials and led fans in a postgame prayer session following a football game in Tennessee.

The move followed news that school officials in Putnam County, Tennessee, were told that teachers and staff as well as coaches, can’t lead students in prayer.

It was prompted by a letter from Americans United for Separation of Church and State to Putnam County School District saying there had been “several instances of prayer and proselytizing at events” at high schools in the district, as per WZTV-TV News.

Administrators from the school district contacted the schools’ attorney, who informed them about the law with regards to these cases.

“Courts have consistently ruled that prayer and proselytizing cannot be sponsored by schools or school personnel,” the attorney said.

In a statement to the news outlet the district added: “We absolutely understand the importance of prayer in the lives of our students, faculty, and staff members.

“We support the right of students to participate in and lead spontaneous prayers. That right is and will continue to be protected. We also understand that faculty and staff members cannot lead or participate in the spontaneous student-led prayers.”

Some parents responded by organizing a prayer event pointing out that it has always been optional for players to pray, and has been a voluntary event, according to parent Dustin Whitefield, who wrote to the WZTV.

He added: “After the game, players and cheerleaders that choose to will be on the field praying on their own. A group of parents will be going out on the field to support them. We will join hands and encircle them from a distance as a sign of protection and solidarity in choosing to continue to pray.

“This is a parent led event! We are encouraging anyone that would like to show their support to please join us.”

Following a game between Upperman High School and Stone Memorial High School players in which Upperman won 27-9 on Friday night, players, cheerleaders, parents and fans came together to pray.

Bob Vick, a PCS alum and fan, shared a photo of Upperman players leading the prayer session on Facebook writing: “Satan’s power was defeated tonight, as the threat of a legal action to forbid prayer after the game was overwhelmed by player lead prayer supported by parents and fans in solidarity on Overall Field.”

What do you think of this response from players and parents in the Putnam school district? Post your thoughts on our Facebook page and share this story.