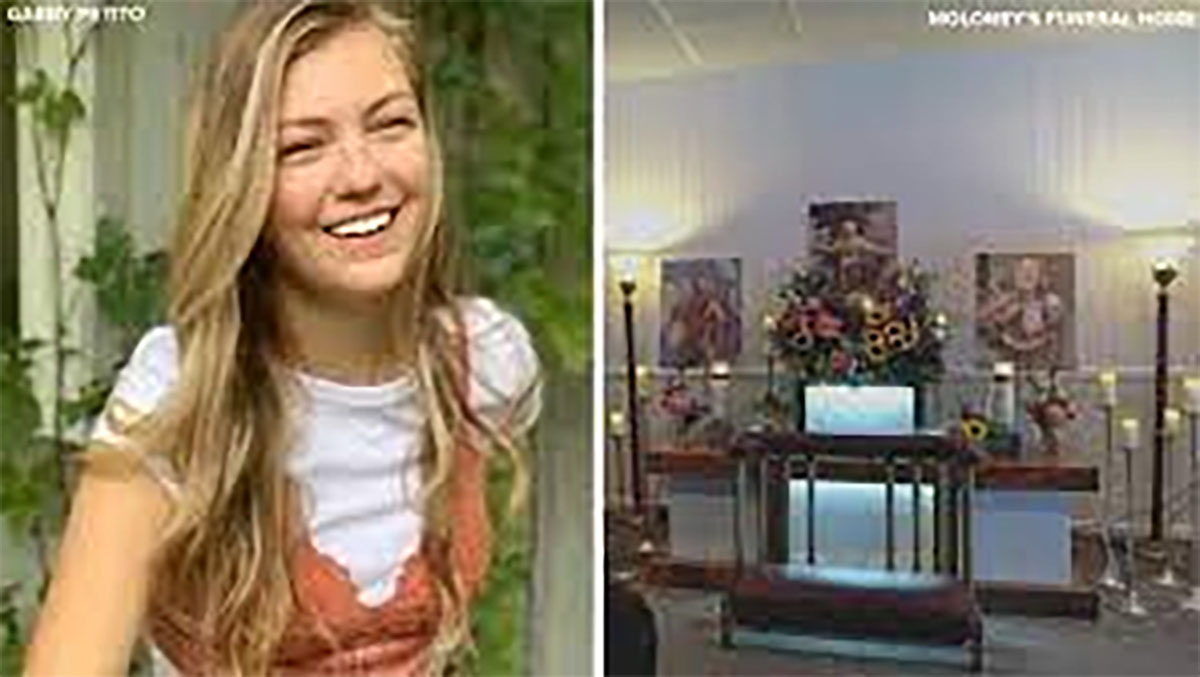 Long lines formed as mourners came out to pay their respects to 22-year-old Gabby Petito and celebrate a life tragically cut short.

The Long Island native was reported missing on September 11 with her parents telling police they hadn’t heard from her in almost two weeks.

She had left for a cross-country road trip with her fiancée Brian Laundrie but on Sept. 1 he returned to the Florida home they shared without her. Her body was found in Wyoming’s Grand Teton National Park on Sept. 19 and her death ruled as homicide.

Mourners lined up to pay their respects to Petito in an emotional gathering held in Long Island on Sunday.

Her father and stepfather were united on stage as they delivered an important message to those who may be in the same situation as Gabby.

Gabby’s dad Joseph Petito thanked everyone who spread Gabby’s story and helped to bring her home.

He also asked that everyone be “inspired” rather than sad about Gabby’s death.

“So when you leave here today, be inspired by what she brought to the table,” he told mourners.

“Because the entire planet knows this woman’s name now. And she’s inspired a lot of women and a lot of men to do what’s best for them first.”

“Put yourself first and do it now while you have the time,” Joe urged.

“I couldn’t be more proud as a father.”

Gabby’s stepfather, Jim Schmidt, stood next to Joe, putting his arm around him to comfort him as he spoke.

He then spoke at the service and focused his remarks around Gabby’s forearm tattoo, which read “Let It Be” in honor of The Beatles’ song.

“When the broken-hearted people living in the world agree there will be an answer, let it be,” Jim quoted.

“It’s okay to mourn for Gabby, and it’s okay to feel sorrow and pain. But we want to celebrate her and how she lived her life,” Jim continued.

“We need to hold on to all of those wonderful memories we shared with her, because that will be the answer. Let it be.”

Gabby’s mother, Nichole, thanked supporters ahead of the services.

“As I scroll through all the posts, my heart is full of love. I wish I could reach out and hug each and every one of you!!! Your support has been so overwhelming and we are so filled with gratitude,” she wrote.

“Please know what you are all doing for us does not go unnoticed, and with all of you by our side, we will get #justiceforgabby 🦋💙🌈.”

Police have spent the last two weeks looking for the only person of interest in the case, her fiancé, Brian Laundrie, scouring a 24,000-acre Carlton Reserve, in Florida, after he allegedly told his parents he was going for a hike there.

An arrest warrant has been issued for Brian Laundrie in relation to a grand jury indictment for his “activities following the death of Gabrielle Petito.”

Gabby’s dad also had an important message for anyone in an abusive relationship.

“There’s a relationship that you’re in that might not be the best thing for you, leave it now,” he said, as per Inside Edition.

Her father also announced the creation of the Gabby Petito foundation that will provide resources to the families of missing children.

The whole world is watching this case and with so many people trying to find Brian Laundrie, I hope they can locate him soon, he has a lot of questions to answer.

Help us pay tribute to the beautiful soul that was Gabby Petito by sharing this story. May she rest in peace.