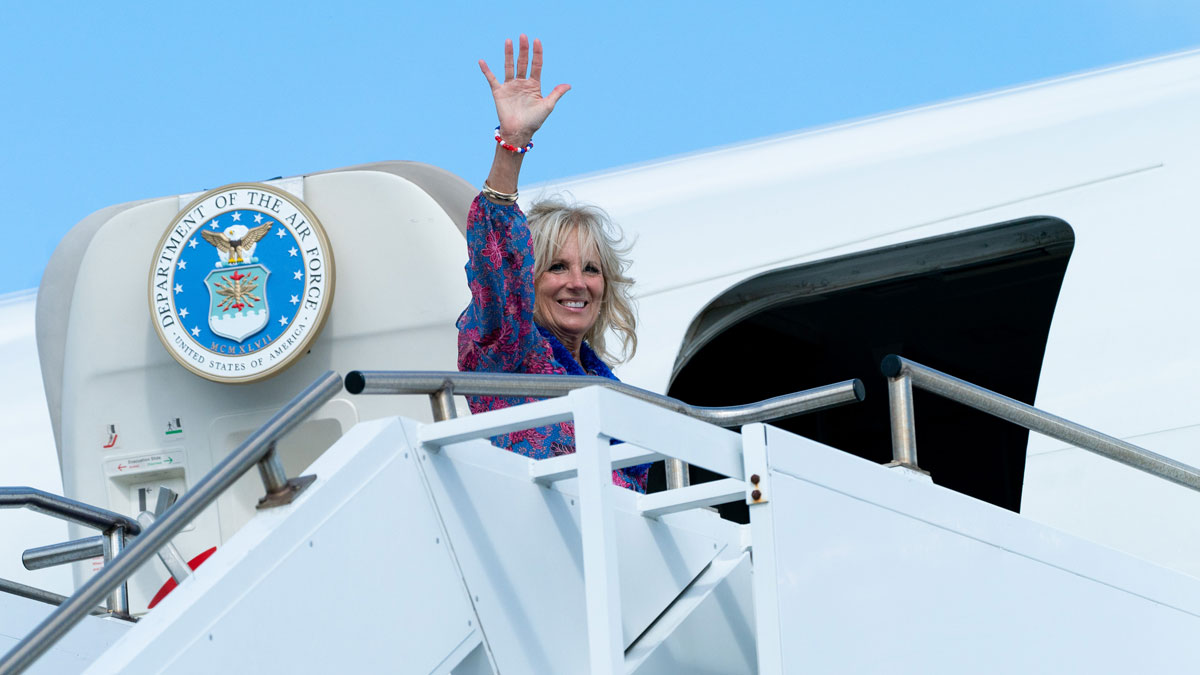 First lady Jill Biden is recovering after suffering a puncture wound on her foot after stepping out onto a beach in Hawaii.

According to her press secretary, Michael LaRosa, she was admitted to Walter Reed National Military Medical Center in Maryland to undergo a procedure to flush out debris from a puncture wound on her left foot, as per NPR News.

The first lady stepped on an object which became lodged in her foot during her visit to the ‘The Aloha State’ last week where she was visiting for two official events.

Her visit followed her first solo international trip as first lady to Tokyo for the start of the Olympic Games where she met the country’s Prime Minister Yoshihide Suga and his wife, Mariko Suga, at Akasaka Palace.

Her whirlwind 48-hour trip also included a virtual get-together with members of Team USA, a meeting with Emperor Naruhito at the Imperial Palace, and attending the opening ceremony for the Olympic Games.

She even managed to fit in a U.S. vs Mexico softball watch party at the U.S. Embassy for staff and their families to cheer on U.S. athletes. The first lady said it was important to support U.S. athletes, who will be competing in very different conditions for the first time.

Athletes are having to follow strict COVID rules while in Tokyo and nearly all are competing without the support of their friends and family. The measures are in place to keep those taking part separate from the Japanese public as COVID cases hit a 6-month high in Japan.

Following her brief visit to Japan’s capital she then flew to Hawaii where she visited a pop-up COVID-19 vaccination clinic at a local school and then joined military families for a barbecue at Joint Base Pearl Harbor-Hickam, as per Hawaii News Now.

Dr. Biden’s visit is part of her extensive drive to encourage Americans to get vaccinated against COVID-19. She has been traveling across the nation stopping in Alaska before she flew out to Tokyo, where she visited the Alaska Native Medical Center.

After touring the clinic in Hawaii she then gave a speech in the school’s library thanking teachers for all they had done during the pandemic.

“Before we start this year, I want to say thank you for all that you did last year — and it was difficult,” she said.

“There were times when you probably wondered if you were going to really make it through all the chaos, but you did what educators what educators do best: You made something out of nothing. you persevered and you supported your students.”

Her message was a personal one considering Jill Biden has spent decades working as a teacher. She has two masters degrees and a doctorate of education and has taught at a community college, at a public high school, and at a psychiatric hospital for adolescents.

She hasn’t let her current role get in the way of her passion as she still teaches writing at Northern Virginia Community College, where she taught full-time during her two terms as second lady.

Her husband, President Joe Biden joined her at the medical facility while she underwent the procedure to “flush out debris” from a puncture wound on her left foot.

“Last weekend, prior to her two official events in Hawaii, the First Lady stepped on an object on the beach which became lodged in her left foot,” Michael LaRosa, the first lady’s spokesman, said in a statement, as per People.

“She will undergo a procedure today (Thursday) at Walter Reed National Military Medical Center to remove the object. The President will join her.”

It’s unclear where the first lady was when the incident happened as no further details have been released.

This latest procedure follows news that the 70-year-old underwent another  “common medical procedure” in April, the White House said earlier.

Joe Biden also accompanied his wife to the outpatient center for that procedure which she came through “well” and was expected to resume her normal schedule, but no further details were provided.

The first lady’s strength and determination to fill such giant roles continues to amaze me; she is a true inspiration and I’m sure this latest procedure will do nothing to stop her continuing on her path.

Help us to wish her well by sharing this story.