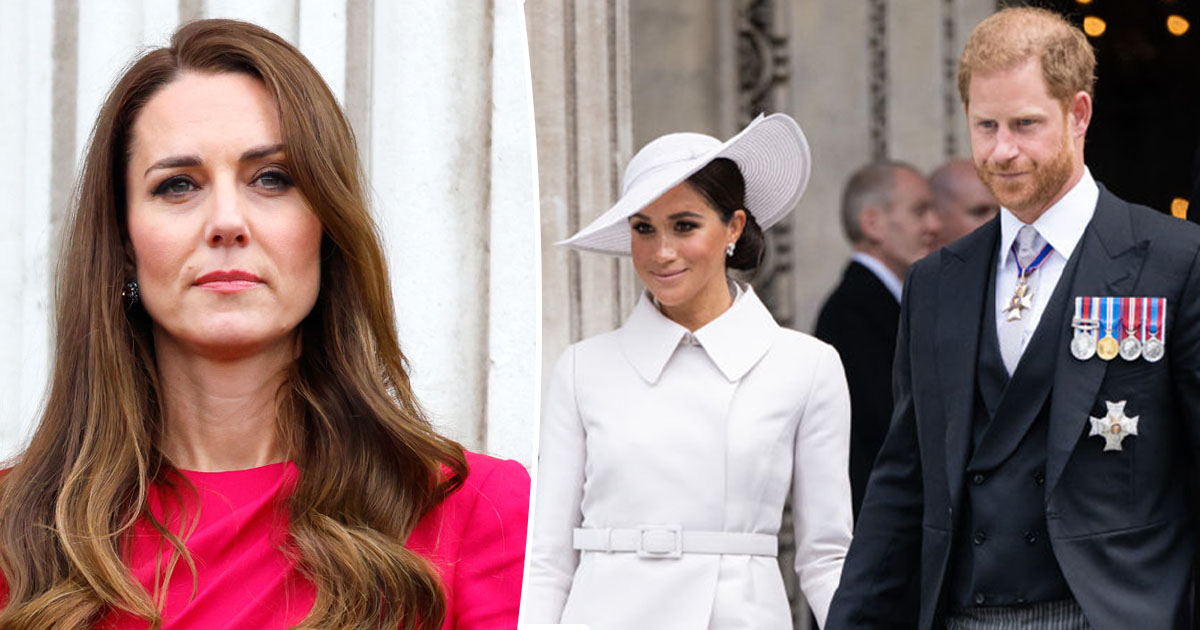 The Queen of England’s Jubilee celebrations were a sight to behold. No expense was spared to celebrate the long-reigning monarch. All the Royals were in attendance, even the ones who famously gave up their titles; namely Prince Harry and Meghan Markle.

While the family put on a united front for the crowds, eagle-eyed fans spotted something amiss…

The Queen’s Platinum Jubilee was a much-anticipated event for not just the royals but the entire country. Family and friends flew in from all over the world to pay their respects to the Queen.

A lot of speculation was put to rest when the Duke and Duchess of Sussex were at the celebrations as well. People had formerly assumed they might not show up because they had renounced their royal titles and duties earlier.

But the couple did show up and was greeted with a lot of aplomb both by Queen Elizabeth and the crowds.

The celebrations had the women in the royal family dressed in their best. The Duchess of Cambridge wore an Emilia Wickstead design. The dress was pale yellow and had an X-themed waist detail. It was simple yet elegant; which is usually her style. And as always, she wore a hat with her outfit as is tradition. She chose a matching Philip Treacy hat, with flowers under the rim.

On the other hand the Duchess of Sussex kept it classy as well. She sported a full Dior outfit; white trenchcoat with embellishments, a matching skirt and hat. She styled her hair in an updo so that her earrings were visible.

This was Meghan’s first event as a royal couple after she and her husband had stepped down as active members of the royal family. So of course, she dressed to impress!

According to reports, when Harry and Meghan entered the Cathedral, some booing could be heard but it was soon drowned out by thunderous applause.

They talked to a few clerics before they entered the venue, and sat in the second row with Princess Eugenie and Princess Beatrice.

Meghan and Harry did not interact with any senior members of the royal family. They did not have an interaction with Prince William and Kate. When Prince Charles passed by their seats, he made no acknowledgements towards them and even looked away.

But in contrast, when he passed by older son’s family he made a slight greeting and even blew a kiss towards them! After the service, the reception was to take place. The Duke and Duchess of Sussex were notably absent from it.

While the young Royal couple were present at all the major staple events like the Trooping the Colour, they kept a safe distance from Prince William and Kate.

The Duke and Duchess of Cambridge were front and center of all the events. They stood with the Queen and other close relatives on the balcony during one of the ceremonies while Harry and Meghan were apparently somewhere behind the scenes, playing with children.

This was due to the fact that the Queen had strictly instructed that only active members of the royal family were to be present with her on the balcony.

Harry and Meghan seemingly brushed off any awkward behavior they were given by the royal family. And as always they doted on one another like a young couple in love.

And of course, as always fans were quick to make comparisons between both the young royal couples. Many people were convinced that both William and Kate were deeply unhappy.

Some theorized that Kate was jealous of the love Harry displayed towards Meghan, and of how well liked Meghan was by the public.

Others were convinced that Kate was amazed by Meghan when the latter arrived at the church. In the video where Kate looks behind her, presumably at Harry and Meghan, people think she might have been sayings “wow.”

Much has been speculated about Kate and Meghan’s relationship with one another. Tabloids were rife with disdain for the American pricess, pieces about Meghan’s rude behavior towards Kate which at one point even made the Duchess of Cambridge cry were common. But in their interview to Oprah, the young royal couple open up about the truth.

Meghan revealed the actual story; she had never been rude to Kate. It had been the other way around, where Kate had made Meghan cry on the latters wedding day. She went on to say she was shocked that the palace officials did nothing to contradict the false narratives the media was conjuring about Meghan.

Meghan said, “She’s a good person, and I think so much of what I have seen play out was this idea of polarity where if you love me you don’t have to hate her, and if you love her, you don’t need to hate me.”

The two famously did not get along. Accoridng to royal authors, Kate did not make an effort in their relationship. The only thing the two women seemed to have in common was their time in Kensington Palace.

Hopefully the rift between them is not too big that it may never be mended! What do you think about Kate’s reaction to Meghan? Let us know in the comments.

Share this piece with friends and family to know what they think as well!