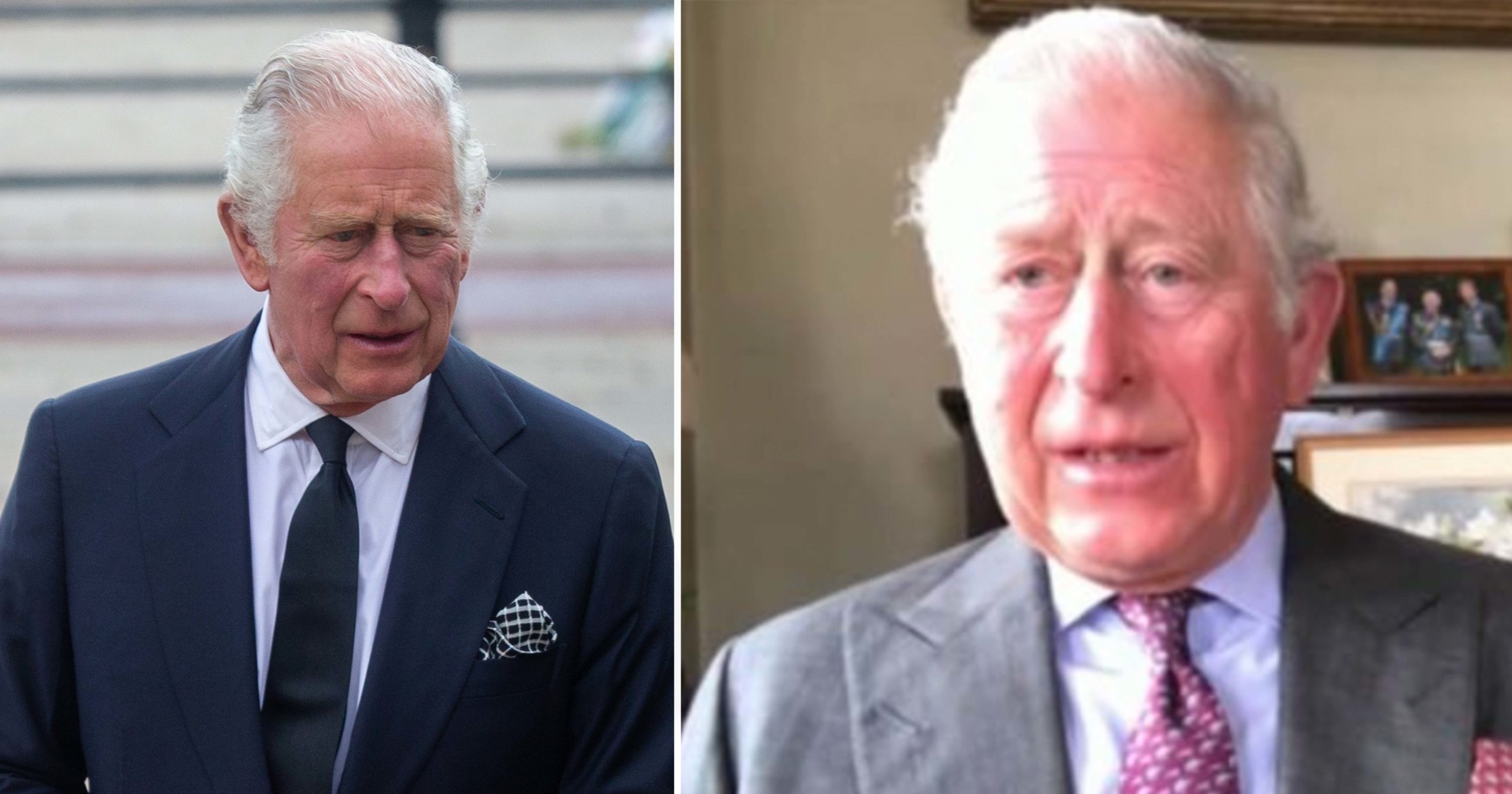 King Charles has been the reining monarch of Britain for a little more than a week. With the death of his mother, he takes on the duties Her Majesty had for 70 years. Sadly, this means that some of the charitable work close to his heart will have to be put on hold.

Over the years, King Charles has held many speeches. One might say he is better prepared to become King than any other in history, given the amount of time he’s been waiting.

Only a day after his mother’s passing, Charles held his first address to the nation. As the Queen was finally laid to rest, His Majesty held an emotional speech, thanking the country for their support and love.

Yet it wasn’t that long ago that one of his speeches left people rather confused. It wasn’t so much what he said during the speech, but rather a mysterious photo snapped of the background.

The newly-announced King Charles is all begin his reign as monarch.

Last Saturday – in an emotional first address to the nation – the 73-year-old spoke highly of his late mother.

In his address, Charles expressed that despite the sorrow around the nation and Commonwealth, people would always “remember and draw strength from the light of her example.”

He added some inspirational words:

“To my darling Mama, as you begin your last great journey to join my dear late Papa, I want simply to say this: thank you,” King Charles said. “Thank you for your love and devotion to our family and to the family of nations you have served so diligently all these years. May’ flights of Angels sing thee to thy rest.'”

On Wednesday, Queen Elizabeth’s coffin was transported from Buckingham Palace as she left her official home for the last time. The journey to Westminster Hall went along Queen’s Gardens, The Mall, Horse Guards and Horse Guards Arch, Whitehall, Parliament Street, Parliament Square, and New Palace Yard, with tens of thousands of people honoring her along the way.

The procession – which, according to The Guardian, had been decades in the making – saw the Queen’s coffin placed on a gun carriage and drawn through the center of the capital. The gun carriage, The George Gun, was also used for the ceremonies when the Queen Mother and King George VI – Her Majesty’s parents – passed away.

King Charles joined William and Harry in walking behind the coffin, along with the Queen’s other children, Prince Andrew, Prince Edward, and Princess Anne. Meanwhile, the Queen Consort, Kate Middleton, Sophie, and Meghan Markle traveled by car.

On Sunday, just one day before the funeral, King Charles addressed the nation again.

King Charles reportedly held a reception at Buckingham Palace on Sunday evening for all heads of state attending the funeral of Queen Elizabeth. At 8 P.M, a national minute’s silence was held.

The entire nation is mourning the passing of Queen Elizabeth, and on Sunday, King Charles took the time to thank them. The monarch said he and Camilla – the Queen Consort – were “moved beyond measure” by everyone paying their respects.

“As we prepare to say our last farewell, I wanted simply to take this opportunity to say thank you,” he said.

“Over the last 10 days, my wife and I have been so deeply touched by the many messages of condolences and support we have received from this country and across the world,” he wrote.

King Charles was officially announced as King just days after Queen Elizabeth’s passing. He will take on many new duties, but unfortunately, as he confirmed in his speech, this will mean cutting down on certain charitable work.

He and Camilla have lived at Clarence House for nearly 20 years. As of today, it’s still unclear whether he and the Queen Consort will move into Buckingham Palace or remain at their residence.

Now, becoming King of England means many things. It’s the most pivotal job within the monarchy, and promises no end of stress and change. Yet if there’s anyone who has been properly prepared for the role, it’s King Charles.

So how did his journey toward the throne start?

The British line of succession is simple in that the firstborn child inherits the throne. That meant Charles, as he was born on November 14, 1948. At the time, Elizabeth was not yet Queen. However, she was crowned when Charles was just three, laying the foundation for the young boy to become King one day.

The young Charles attended his mother’s coronation at Westminster Abbey the following year. Then, alongside his siblings, Andrew, Edward, and Anne, he grew up in Buckingham Palace and went to school like any other child.

He attended Gordonstoun School in Scotland, the same institution his father attended as a child. After that, Charles studied at Cambridge University, earning a degree in anthropology, archeology, and history. By doing so, he became the first British monarch to attain a university degree.

When he turned 21, Charles was officially named The Duke of Cornwall, a title reserved for the oldest male heir. He was crowned Prince of Wales by the Queen – and served for five years in the Royal Navy.

In 1981, at the age of 32, Charles married Lady Diana. Their wedding was watched by more than 700 million people – and the couple welcomed sons William and Harry.

However, as we all know, the marriage turned sour after Charles had an alleged affair with Camilla, and things turned into a nightmare.

King Charles has been very passionate about botany and gardening over the years. He – just like his father, the late Prince Philip – was enthusiastic about the environment and was involved in many environmental associations.

For example, Charles created the Prince’s Rainforest Project in 2007, to raise awareness of deforestation. Moreover, he is the president of the WWF in the UK, and even started his own organic farm and garden at Highgrove Gardens.

However, given that Charles is now King, he will likely have to give up some of the causes that lay closest to his heart, as he simply won’t have time to give them the necessary attention.

As Queen Elizabeth’s health deteriorated in the latter years, he carried out many of her responsibilities. In 2013, he represented his mother for the first time at the Commonwealth Heads of Government. He also delivered the Queen’s speech at the opening ceremony of Parliament in 2022.

Of course, becoming King doesn’t only concern the UK; Charles also becomes Head of the Commonwealth. That includes 54 independent countries, and Charles becomes the head of state for 15 nations, including Australia and Canada.

As King, he will also be holding many more speeches than before – a duty he got well used to in his role as heir.

Though Charles has done an excellent job with that part of his duties in the past, there is one particular speech that causes quite the kerfuffle … and all because of a very mysterious background to a photo.

In April 2020 – in the middle of the Covid-19 pandemic – Charles sparked a frenzy online as he opened up the new NHS Nightingale Hospital. It was one of then-Prince Charles’s first royal duties after being isolated for seven days having tested positive for the coronavirus. He wasn’t at the hospital for his speech, but did it from his Scottish home Birkhall via video call.

In his speech to the NHS workers, he said: “In this dark time, this place will be a shining light.”

He praised the new hospital: “It is, without doubt, a spectacular and almost unbelievable feat of work in every sense, from its speed of construction in just nine days to its size and the skills of those who have created it.”

“An example if ever one was needed of how the impossible can be made possible and how we can achieve the unthinkable through human will and ingenuity,” he added.

Forgot to put a picture in the frame?

Even though the speech was very much appreciated, people couldn’t help but have their attention drawn to a rather bizarre photo frame behind him.

In the background, several family photos were seen during the video message. One was of him with his sons, Harry and William, another one with his mother, the Queen, and a wedding day photo of his beloved wife, Camilla.

However, one frame seemed not to include a photo at all. Instead, it was simply a white silhouette in front of a black background.

“Did Charles forget to put a picture in the frame?” one person joked on Twitter.

Do you think King Charles will make a good king? Please share this article on Facebook and let us know your opinion!