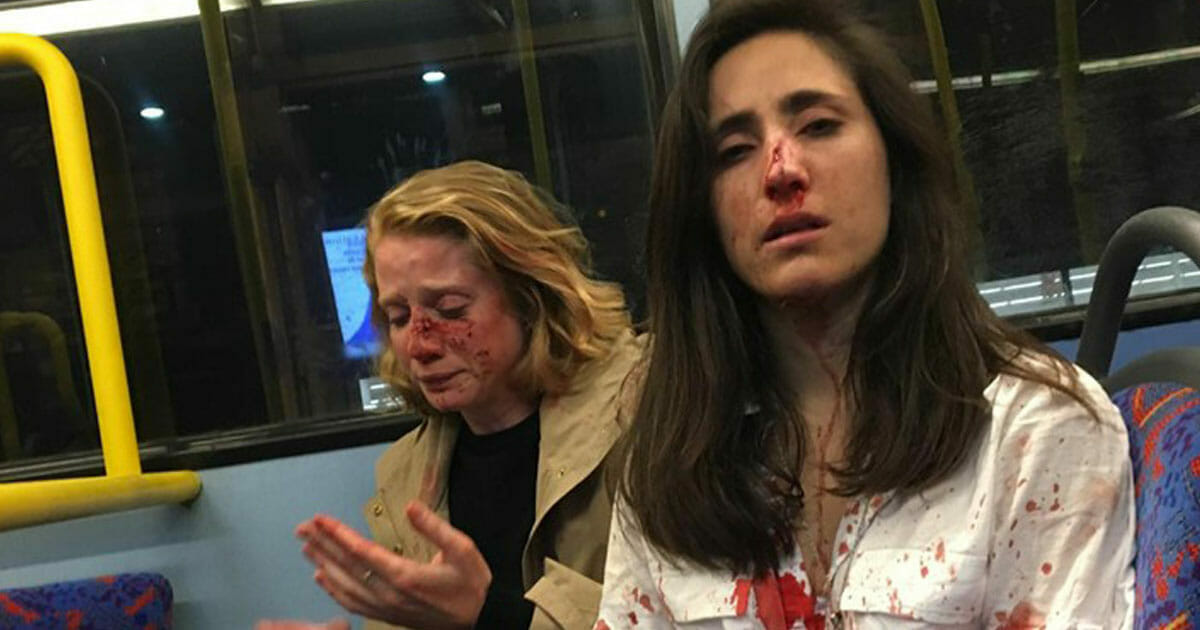 After a night out in London, Melania Geymonat and her girlfriend took the night bus home.

But on the double decker they were attacked by a group of young men because they refused to kiss in front of the thugs.

“Suddenly the bus had stopped, the police were there and I was bleeding all over,” Melania told The Sun.

Melania and her girlfriend had spent a lovely evening out in London.

However on their way home, their date night took an ugly turn.

After that, they demanded Melania and her girlfriend kiss while making rude sexual gestures towards the couple.

“They started behaving like hooligans, demanding that we kissed so they could enjoy watching, calling us ‘lesbians’ and describing sexual positions,” Melania wrote in a Facebook post.

“The next thing I know is I’m being punched”

At first, Melania tried to calm things down. She wanted to shift the focus and started joking with the guys.

It only got worse. Seconds later, Melania’s girlfriend Chris was in the middle of the bus fighting with the group of men.

“On an impulse, I went over there only to find her face bleeding and three of them beating her up. The next thing I know is I’m being punched. I got dizzy at the sight of my blood and fell back. I don’t remember whether or not I lost consciousness. Suddenly the bus had stopped, the police were there and I was bleeding all over. Our stuff was stolen as well,” Melania wrote and posted a picture of herself and Chris.

Both Melania and Chris visited the hospital for treatment after the horrible attack.

According to HuffPost, Melania still doesn’t know if her nose is broken.

Melania Geymonat, who is a doctor but currently works for Ryanair as a flight attendant, said she had never before been physically attacked because of her sexuality.

Since the horrible incident, the women’s heartbreaking story has been shared all over the world.

London’s mayor spoke out and condemned the attack.

Melania hopes that the pictures of her bloody face and her story will draw attention to violence against LGBT people.

“I’m tired of being taken as a sexual object, of finding out these situations are usual, of gay friends who were beaten up just because. We have to endure verbal harassment and chauvinist, misogynistic and homophobic violence because when you stand up for yourself s**t like this happens. I just hope that in June, Pride Month, stuff like this can be spoken out loudly so they stop happening!” she said.

Luckily, the bus operator had security cameras who captured the attack, and five male teenagers between 15 and 18 have been arrested.

The suspects were interrogated on suspicion of robbery and aggravated assault, according to BCC.

I am ashamed to be a man and a human when I hear things like this.

I hope they are both able to find strength from this situation and that it doesn’t haunt them for years to come.

Please share this article to show that all forms of violence against LGBT people is totally unacceptable!