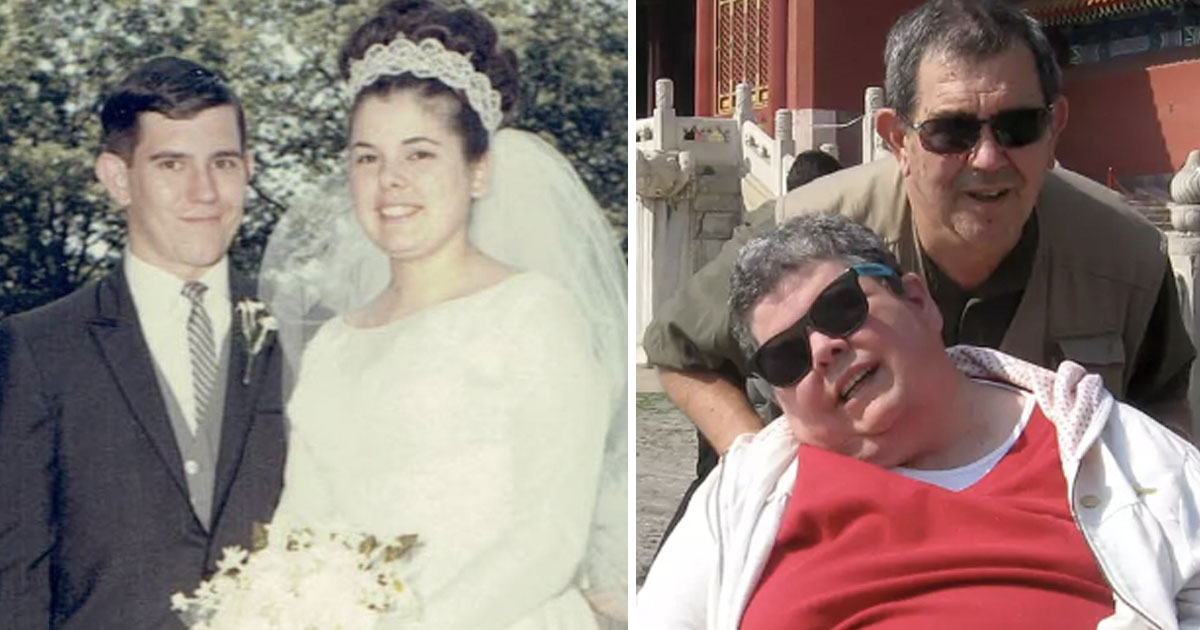 There are some couples that restore your faith in love and all things good. This is a story of a couple who took their wedding vows seriously, and the husband stuck to his wife in her sickness as he did when she was healthy…

It was 1958 and Andy Fierlit was attending a church dance at Pawtucket, Rhode Island. The teenager’s eyes then fell on Donna and it was love at first sight. He asked Donna for a stick of gum and that was the beginning of the rest of their lives.

In 1966, the couple tied the knot and went from high school sweethearts to husband and wife. They spent blissful years together and grew into a family of six, with four children. They now have 12 grandchildren as well.

Donna was only 45 years old when she had a brain aneurysm. She had a migraine at a Christmas party and decided to sleep it off, the next day she suffered from a major aneurysm that changed the course of her life. The aneurysm left her partially paralyzed and doctors advised Andy to put her in a nursing home because the amount of care she would require would put a strain on him and his family.

But as Andy heard the doctor’s suggestions, all he could recall were his wedding vows. He refused to put his beloved wife into a nursing home.

And now, Donna is 76 years old, and in the last three decades that she has been paralyzed she has been able to see more of the world than people get to in their entire lifetimes even while being bound to a wheelchair.

This was all because of her husband Andy, who remains in love with his wife.

“Sure, it’s a challenge, but I’ve loved Donna from the day I met her and can’t imagine doing anything else,” Andy says. The couple always dreamt of traveling the world together and have now visited all seven continents.

Andy says of his wife, “Donna isn’t mobile and she has short-term memory problems, but she can tell you her father’s license plate from 1955, and she’s a lot of fun to travel with. We have a deep love for each other and we’ve always believed that when life gives you lemons, you make lemonade.”

Andy Fierlit passed away in 2019 and Donna followed the subsequent year, passing in 2020, according to posts on their daughter Allison Fierlit Peters Facebook account.

They were truly an inspiration and remind us that marital vows are made to keep.

Share this inspiring story of a love that endures with your friends and family.