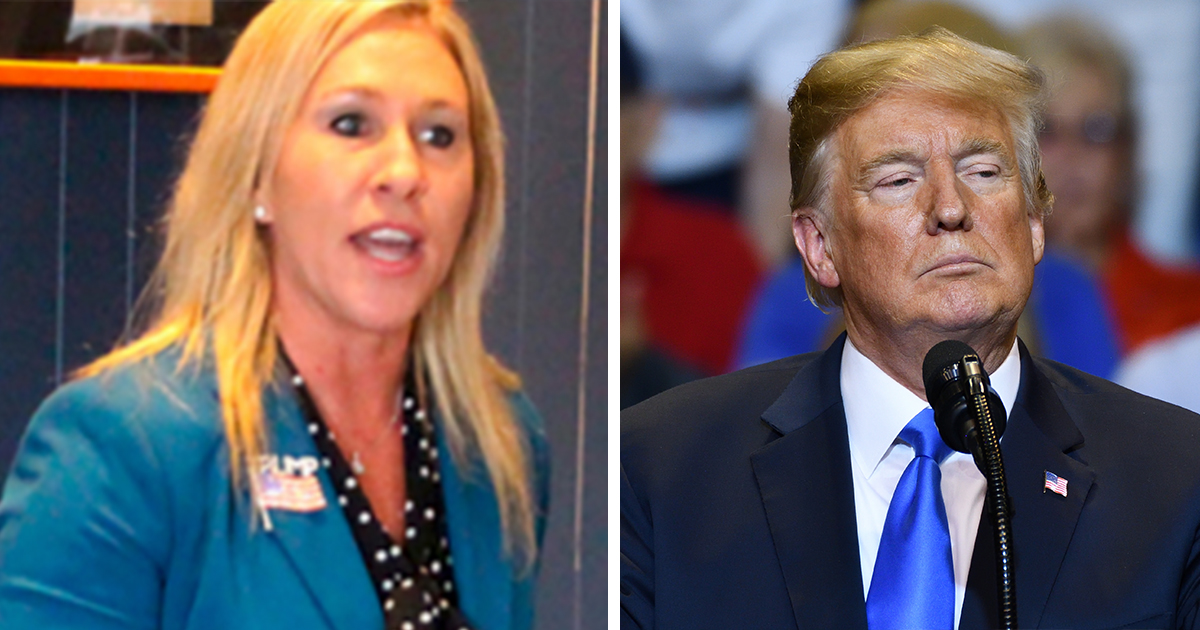 After just a month in congress GOP Representative Marjorie Taylor Greene has proven to be a controversial figure with many accusing her of dividing a party over its allegiance to Trump.

The Georgia representative has, over the years, been attaching herself to all kinds of conspiracy theories concerning the 2012 shooting at Sandy Hook Elementary School to the Las Vegas music festival shooting in 2017.

She is also a supporter of QAnon, the Pro-Trump conspiracy theory alleging that a secret group of Satan-worshipping, cannibalistic pedophiles is running a global child sex-trafficking ring and plotting against former U.S. president Donald Trump.

Now the 46-year-old construction company owner has bragged about a phone call she said she had with the former president indicating she had “his support.”

She tweeted: “I had a GREAT call with my all time favorite POTUS, President Trump!”

Then in a series of ranting tweets which followed Greene wrote: “You can never beat him because We The People have his back. The blood thirsty media and the socialists hate America Democrats are attacking me now just like they always attack President Trump. I won’t back down. I’ll never apologize. And I’ll always keep fighting for the people. For me, it’s America First!!! Any elected politician that isn’t putting America First doesn’t deserve their position or the people’s trust.

“I will never back down and will stand up against the never ending blood thirsty mob who has addicted their followers to hate, in order to everything I can to protect our freedoms,” she added.

“I’m so thankful to say the people have my back and I will always have theirs.”

It’s unclear why the two were having a conversation in the first place and neither side have made any further comments on the matter, but Trump has previously called Greene a “future Republican Star.”

The 46-year-old avid Trump supporter came under fire recently for reportedly liking a number of posts calling for violence against Democrat members of congress as well as former President Barack Obama.

In a move to have Greene removed from congress California congressman Jimmy Gomez said she had amplified conspiracy theories that the September 11 attacks were an ‘inside job’ and the ‘mass shooting at Marjory Stoneman Douglas High School was staged.’

Gomez added that in light of recent media reports it has been confirmed that: “Congresswoman Marjorie Taylor Greene had previously supported social media posts calling for political violence against the Speaker of the House, members of Congress, and former President Barack Obama.”

In 2018 Greene was caught on camera harassing David Hogg, then a 17-year-old survivor of the Parkland school shooting, as he was walking on Capitol Hill.

Despite Hogg ignoring Greene’s constant questioning she asked: “Why are you using kids as a barrier?

“Do you not know how to defend your stance? Look, I’m an American citizen, I’m a gun owner. I have a concealed carry permit, I carry a gun for protection for myself, and you are using your lobby and the money behind it and the kids to try to take away my Second Amendment rights.”

Greene was placed on the House Education and Labor committee, which has jurisdiction over schooling issues in the country in a move which attracted a barrage of criticism, including from fellow congress members.

House Minority Leader Kevin McCarthy met with Greene on Tuesday evening but the Californian Republican Congressman hasn’t commented on anything that was said during the meeting.

“I spoke to Leader McCarthy this morning, and it is clear there is no alternative to holding a Floor vote on the resolution to remove Rep. Greene from her committee assignments,” Hoyer said in a statement on Wednesday, as per CNBC.

As reported by CNBC the House is due to vote Thursday on a resolution to strip Greene of her committee assignments, Majority Leader Steny Hoyer said.

The decision on whether to expel her from congress will be a prime indicator on where the Republican party lies in its allegiance.

Do you think Greene should stay in congress? Please post your thoughts below and don’t forget to share this story.