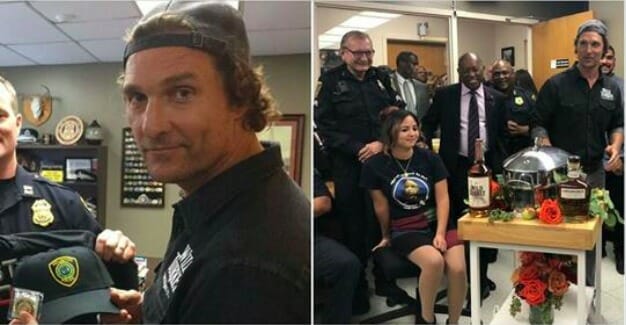 Who doesn’t love Mathew McConaughey? Now, combine the Hollywood star’s natural charm with an act of pure altruism, and your heart is bound to melt.

Matthew has gathered highly deserved awwws after embarking on a to deliver turkeys and bourbon to hard-working first responders in Texas, his home state. The goal: to commemorate their brave efforts during Hurricane Harvey, just one year ago.

“I’m Texas born and raised, so acknowledging the hard work and dedication of first responders in Houston is meaningful to me personally,” he said.

The star took time out of his busy day to deliver free lunch, frozen turkeys, and samples of Wild Turkey bourbon to first responders across Houston as well as 911 operators and emergency room staff. All of these were paramount in assisting victims during the disastrous storm that hit Texas last year.

“Basically today is about saying thank you to these people that were all on the front line and got out there to rescue people first,” the actor said in a video.

First responders are sometimes forgotten, but certainly deserve our admiration for the courage and speed in which they rush to help others, putting their own interests aside to make sure they are there for the public in emergency situations.

“I am glad to make it to Houston to recognize how important these folks are,” he said.

Thankfully, parts of his visits were captured in heart-melting photos which were later shared on social media.

“Honored to welcome him to our city and thank him for spending time and recognizing our [police officers, firefighters,] and 911 dispatchers for their service,” the mayor wrote on Twitter.

The public is, of course, going rather ‘gaga’ over these images, with hundred commenting that they sure wouldn’t mind receiving a turkey and some bourbon from this gentleman!

Watch the southern superstar in action in the video below.

What a wonderful way to thank our hard-working first responders! They must always be remembered and appreciated for all the difficult and tiresome work they do in times of catastrophe. Share this story if Mathew McConaghey’s actions warmed your heart, too.