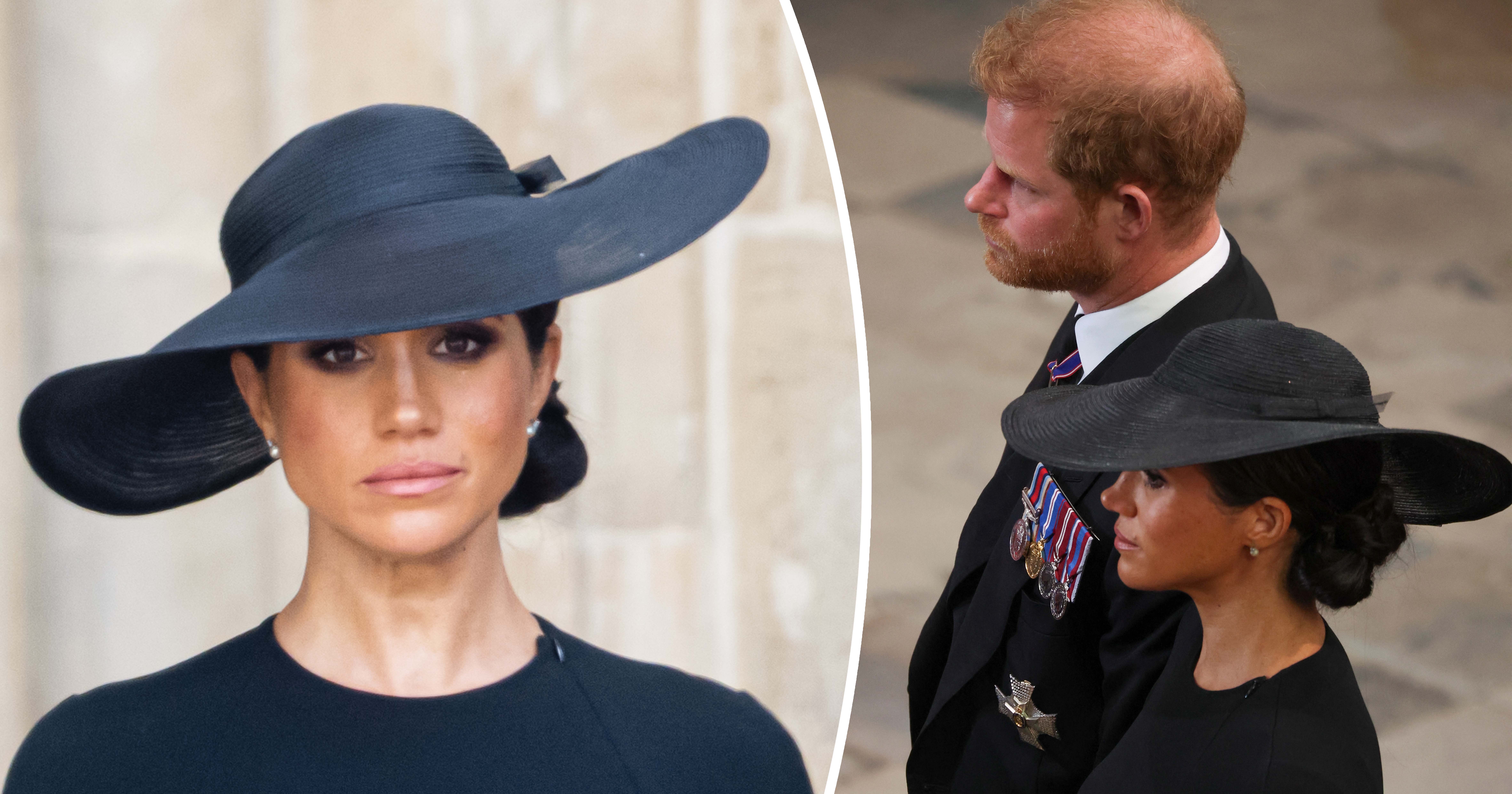 The Royal Family, honored guests, the whole of the UK, and indeed the rest of the world said farewell to Queen Elizabeth on Monday. After a long mourning period, her coffin was lowered into the Royal Vault at the St. George’s Chapel in Windsor. The day was emotional, and several guests were seen to be crying, including Meghan Markle.

Harry and Meghan – who have been in the UK since the Queen’s passing – did their best to keep a low profile at the late monarch’s funeral. Meghan was seen wiping tears from her face, though not all believe the gesture is as genuine as it seems.

Today anchor Karl Stefanovic – well-known for harboring a fierce dislike of Meghan – implied that pictures of Meghan wiping away tears might be misleading.

The last number of years have seen Harry and Meghan’s relationship with the British royal family deteriorate. Yet during the funeral of Queen Elizabeth, the couple reunited with the other royal family members to show a united front.

Harry walked beside his brother, William, behind the coffin as the Queen’s funeral procession made its way through the streets of London yesterday.

He did not wear a military uniform to the state funeral of Queen Elizabeth, as he was stripped of his military titles when he stepped down as a working member of the royal family in 2020. During a vigil the eight grandchildren of the late monarch held this weekend, Harry was permitted to wear his military uniform by his father, King Charles.

Meghan Markle reportedly honored the Queen in a beautiful way during the state funeral. She is said to have worn the pearl and diamond earrings the Queen gave her during their first joint engagement in 2018.

Ever since Queen Victoria’s time – it’s a mourning tradition within the royal family to wear pearls.

In the infamous 2021 Oprah interview, Meghan spoke dearly about the Queen and how she had treated her during their first engagement together.

“The Queen, for example, has always been wonderful to me. I mean, we had one of our first joint engagements together,” Meghan said at the time.

Meghan added: “And she has a blanket that sits across her, her knees, for warmth and it was chilly and she was like, Meghan, come on, and put it over my knees as well.”

Kate Middleton and Meghan Markle both followed royal protocol with their clothing. However, many royal fans reacted to the fact that Meghan seemed to break a certain royal tradition. It’s reportedly been tradition – though not mandatory – that the royal women wear a mourning veil. Kate, Camilla – the Queen Consort – and Princess Sophie were among several women seen sporting such a veil, together with the traditional black hat.

Meghan Markle and young Princess Charlotte, however, decided not to wear the veil.

On Wednesday last week, Queen Elizabeth’s coffin was transported from Buckingham Palace as she left her official home for the last time.

The journey to Westminster Hall went along Queen’s Gardens, The Mall, Horse Guards and Horse Guards Arch, Whitehall, Parliament Street, Parliament Square, and New Palace Yard, with tens of thousands of people honoring her along the way.

The procession – which, according to The Guardian, had been literal decades in the making – saw the Queen’s coffin placed on a gun carriage and drawn through the center of the capital. The gun carriage, The George Gun, was also used for the ceremonies when the Queen Mother and King George VI – Her Majesty’s parents – passed away.

King Charles joined William and Harry in walking behind the coffin, as did the Queen’s other children, Prince Andrew, Prince Edward, and Princess Anne. Meanwhile, the Queen Consort, Kate Middleton, Sophie, and Meghan Markle traveled by car.

Hundreds of thousands of people got to say a last farewell to the Queen. Westminster Hall was open 24 hours a day. However, not everyone in the queue was guaranteed to see the Queen, as she was lying in-state.

The BBC reported that the entry to the back of the line was to be closed early to ensure that those already waiting got the chance to walk past the Queen’s coffin.

The entire nation is mourning the passing of Queen Elizabeth, and on Sunday, King Charles made sure to thank the public. The monarch said he and Camilla – the Queen Consort – were “moved beyond measure” by everyone paying their respects.

“As we prepare to say our last farewell, I wanted simply to take this opportunity to say thank you,” King Charles said.

“Over the last ten days, my wife and I have been so deeply touched by the many messages of condolences and support we have received from this country and across the world.”

He added: “In London, Edinburgh, Hillsborough, and Cardiff, we were moved beyond measure by everyone who took the trouble to come and pay their respects to the lifelong service of my dear mother, the late Queen.

Among notable royals attending the funeral were King Felipe VI and Queen Letizia of Spain, King Willem-Alexander and Queen Maxima of the Netherlands, Emperor Naruhito and Empress Masako of Japan, and King Carl XVI Gustaf and Queen Silvia of Sweden.

Thousands of people flanked the road, with many of the Queen’s employees coming out to say goodbye. When approaching the castle, one of the Queen’s horses, Emma, was seen standing by the side of the road, getting one last look at her former owner.

At Windsor, Queen Elizabeth’s two beloved corgis, Muick and Sandy, were seen outside waiting for Her Majesty’s hearse.

The Choir of St George’s Chapel sang during the funeral service at St George’s Chapel. Then, before what’s described as the “final Hymn,” Queen Elizabeth’s imperial state crown, the Orb, and the Sceptre was removed from her coffin and placed on the altar. Next, King Charles put his mother’s Company Camp Colour of the Grenadier Guards on her casket before The Lord Chamberlain broke his Wand of Office and placed it down.

The Queen’s coffin was then lowered into the Royal Vault while the Dean of Windsor read Psalm 103. It ends with the traditional words; Go forth upon thy journey from this world, O Christian soul.

The Quen’s piper closed the funeral with a traditional bagpipe song. Later in the evening, a funeral service was held for the closest royal family members.

Meghan Markle cried during the funeral – and get’s criticized

King Charles was fighting back tears as his mother’s coffin was lowered into the Royal Vault – but he wasn’t the only one crying during the day. Meghan Markle was also seen wiping tears from her face after the state funeral, with makeup visibly seen on one of her black gloves.

Meghan was pictured standing with William and Kate’s two children, Prince George and Princess Charlotte while waiting for their car after the state funeral. At one point, Charlotte turned around and met Meghan’s glance, who looked down and gave the young princess a lovely, comforting smile.

As mentioned, several royal family members cried as they said farewell to Queen Elizabeth. But apparently, Meghan’s tears had one television personality quite upset.

Today’s funeral coverage of the Queen’s funeral was led by anchor Karl Stefanovic, who decided to poke fun at Meghan after pictures of her crying were published.

“We don’t know if it was true or not”