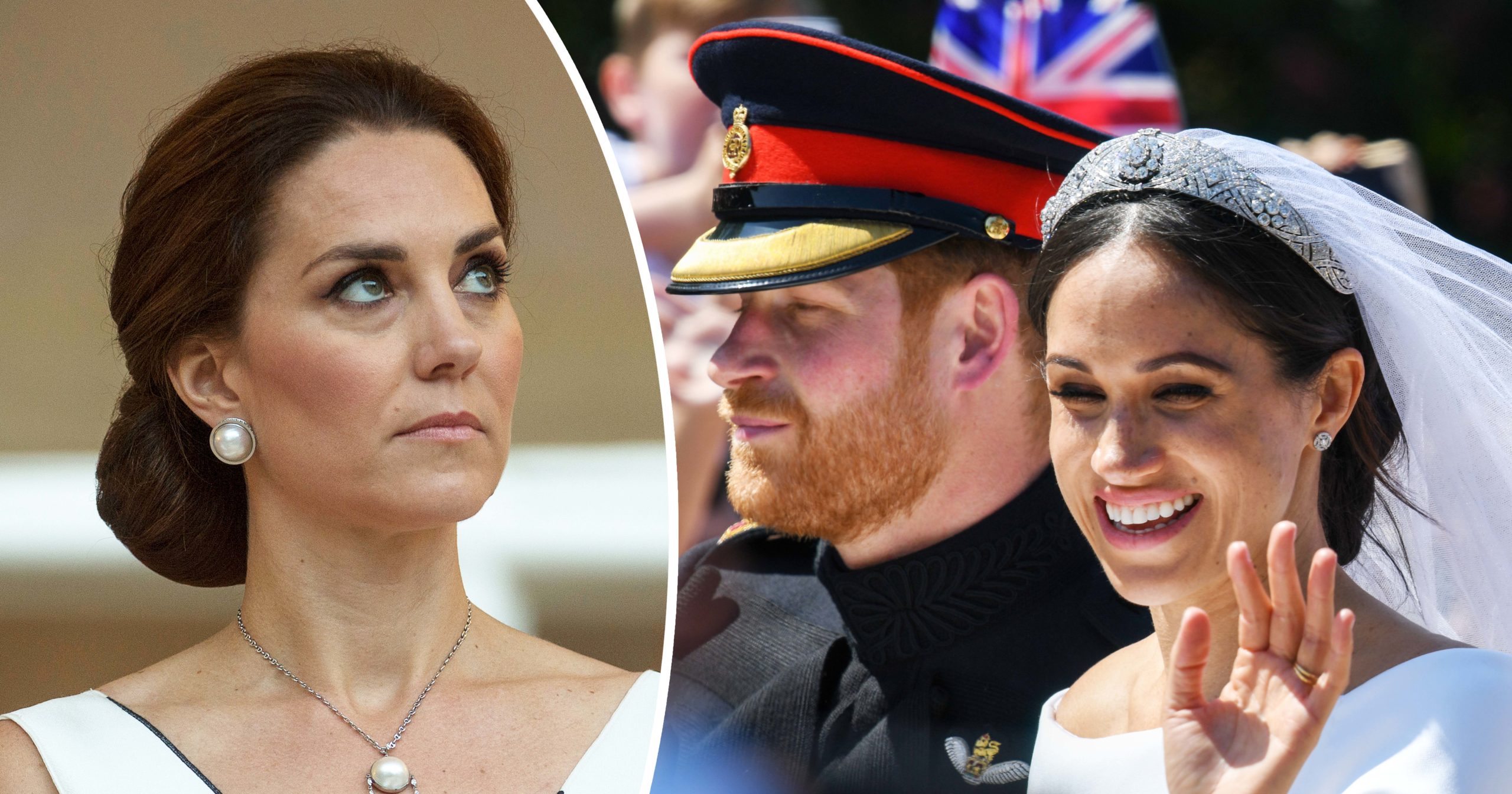 Becoming a member of the British Royal Family means making plenty of adjustments to one’s life. Meghan Markle’s entry, marked by her high-profile wedding to Prince Harry in 2018, represented the beginning of a new life.

Not only would she have to learn a few things, but first and foremost, every step and action she took would be analyzed by the oftentimes-harsh British paparazzi press.

Only two years after tying the knot, Harry and Meghan decided to leave the Royal Family for good. Instead, they settled in the US, seeking to live a more peaceful life. However, things took quite the turn after their infamous sit-down interview with Oprah.

There, they claimed many shocking things about the Royal Family, allegedly destroying the couple’s relationship with Harry’s brother, Prince William, and wife, Kate Middleton in the process.

Recently, certain journalists have claimed that they knew within days of the wedding that Harry and Meghan would eventually leave royal life behind. Interestingly, during the couple’s union, there were things that really stood out between their big day and that of Prince William and Kate’s.

Harry and Meghan’s last few years have been hectic by any measuring stick. That said, the family of four finally appears to be settling after leaving Buckingham Palace two years ago.

In February of last year, Harry and Meghan sat down with TV host Oprah in the garden of her home in Montecito, California, and proceeded to spill the truth about their experiences within the Firm. Meghan Markle didn’t hold back, revealing that Prince Charles was refusing to take Harry’s phone calls and stating that Kate Middleton had made her cry over the flower-girl dresses on her wedding day – this was in direct contradiction to earlier claims made by the tabloids.

However, the most shocking part occurred when Meghan claimed that conversations had taken place within the palace concerning how dark Archie’s skin would be.

She declined to name a specific person who had made the comment, adding only: “I think that would be very damaging to them.”

In November 2017, Prince Harry and Meghan Markle announced through the British Royal Family that they had gotten engaged.

Their subsequent wedding took place on May 19, 2018 – the service was held at St. George’s Chapel, Windsor Castle.

From the outside, the wedding of Harry and Meghan was the ideal union, a mirror-image of perfection to follow the wedding of Prince William and Kate Middleton seven years earlier. But was everything really as it seemed?

Both royal weddings saw millions of people celebrating the respective unions. Of course, Kate and William’s wedding was made somewhat more special as it was a future king tying the knot to his future queen.

Looking at pictures of the two brides, Meghan was to be seen waiving to the crowd in a more relaxed manner, her fingers spaced out. Kate, meanwhile, kept her fingers close together for her wave.

The two ceremonies were also quite different. William and Kate’s was more serious, hardly including any laughs, while Harry and Meghan’s was far more relaxed, even including gospel singing.

William and Kate had their guest list full of world leaders, ambassadors, and Prime Ministers, among the many other noticeable guests. Of course, there were many friends and family there as well. On the other hand, Meghan and Harry didn’t have any of those obligations. Rather, their guest list was packed with a veritable who’s who of celebrities.

Harry and Meghan’s private life – and the media coverage they got beforehand – made their wedding unique in its own way. One royal expert even went as far as to claim that the guests were there just to … be there?

Two guests were movie star George Clooney and his wife, Amal. But reports suggest that they didn’t know Harry or Meghan at all.

‘There’s a story doing the rounds that while Carolyn Bartholomew, Diana’s former flatmate, was waiting for the wedding service to start, she turned to the couple alongside her and asked how they knew Harry or Meghan,’ Johnson wrote in the online publication AirMail. ‘”We don’t,” the Clooneys answered brightly.’

Briefly, after the wedding, Harry and Meghan were said to have visited the Clooneys at their residence in Como, Italy. George Clooney himself explained that the four have had dinner together several times in recent years.

Oprah Winfrey also attended the wedding, though this left most people were perplexed as there hasn’t been any talk regarding the talks show host’s relationship with Harry and Meghan. As royal reporter Daniela Elser pointed out, one article’s headline even read: “Oprah Winfrey has arrived at the royal wedding – but people aren’t sure why.”

“(She) populated the wedding with A-list Hollywood celebrities who … have proved their worth to her by speaking out in public about the criticisms of her,” Morton said.

“I don’t think she (had) even met Oprah Winfrey (before the wedding). I don’t know whether Harry had. But she invited these people along, and now she has her own court.”

“All was not well” days after the wedding

“She’s a new player and she’s been quick out (of) the starting box. Unlike Prince Harry’s friends who keep quiet, Megan’s A-list celebrity friends, the court of Meghan, is a very voluble court and they’re very powerful.”

With all that said, it reportedly was obvious to some that Harry and Meghan might question to leave the Royal Family early on during their marriage. Just days after the wedding, Jonny Dymond, royal correspondent for the BBC, felt that something was off.

“I mean, within days, really …There were stories coming out about how Megan behaved towards staff,” he said in the BBC documentary The Prince and the Press.

Still, to this day, many things are uncertain surrounding what really happened. Harry and Meghan have made it clear that there were several reasons behind why they decided to leave the Firm permanently.

In an interview with The Cut, Meghan Markle opened up on the moment that she and Harry decided to leave the UK. The British press coverage scrutinized the Duchess, which affected her health and her relationship with the royal hierarchy.

Meghan Markle reveal when they deecided to leave royal family

As the lives of Harry and Meghan – and the rest of the Firm – were taxpayer-funded, the tabloids claimed the intense scrutiny was of “public interest.” As a result, the couple suggested they could work and earn their own money, instead of being taxpayer funded.

Speaking with The Cut, Meghan explained that they thought that “maybe all the noise would stop.”

Moreover, they appealed to the Royal Family to be able to leave the UK behind and instead move to another country in the Commonwealth, perhaps South Africa or Canada. Sadly, the answer was no.

“Anything to just … because just by existing, we were upsetting the dynamic of the hierarchy. So we go, ‘Okay, fine, let’s get out of here. Happy to,'” Meghan recalled.

She added that their request wasn’t “reinventing the wheel,” and that other royal family members had gotten the green light for the same sort of arrangement.

“That, for whatever reason, is not something that we were allowed to do, even though several other members of the family do that exact thing,” Meghan said.

Following their royal marriage, Harry and Meghan lived at Kensington Palace for a short while. However, that residence was Prince William and Kate Middleton’s home at the time.

Relationship with Kate and William

“It’s in the grounds of Kensington Palace, and it’s quite small,” royal author Tom Quinn said. “It’s tiny compared to the enormous double apartment that Kate and William have.”

A short while later, the couple moved into their private residence. But even though this was supposed to be a happy period, things turned ugly quickly.

Instead, Harry and Meghan moved into Nottingham Cottage, not far from William and Kate. It was then that the relationship between the two couples soured. According to Tom Quinn, this happened for several reasons.

Meghan reportedly had difficulty reconciling that Kensington Palace was reserved solely for William and Kate. At the same time, a senior royal aide told her she’d never be “in the first division.”

After a short stay, Harry and Meghan moved into Frogmore Cottage in Windsor. Now though, as we all know, those royal days have passed.

These days, Harry and Meghan have settled in Montecito, just outside of Santa Barbara, California.

The beachside town is calm and pretty, a far-cry from the hectic lifestyle of Los Angeles. So, it’s hardly surprising that stars such as Oprah Winfrey, Gwyneth Paltrow, and Ellen DeGeneres choose to settle there.

Meghan and Harry allegedly paid $14 million for their house, though in the beginning, it wasn’t certain that they would be able to buy it at all.

“We were looking in [Montecito], and this house kept popping up online in searches. We didn’t have jobs, so we just were not going to come and see this house. It wasn’t possible,” Meghan Markle said.

“It’s like when I was younger, and you’re window shopping — it’s like, ‘I don’t want to go and look at all the things that I can’t afford. That doesn’t feel good.'”

Even though money might have been a significant factor in buying or not buying the house, Meghan and Harry have plenty of money in the bank today. They reportedly got $25 million for their Spotify deal and a staggering $100 million for their Netflix deal.

They subsequently decided to tour the Montecito house – and fell in love.

“One of the first things my husband saw when we walked around the house was those two palm trees,” Meghan explained.

What did you think of Harry and Meghan’s wedding, and do you think they made the right call to leave the royal family behind?