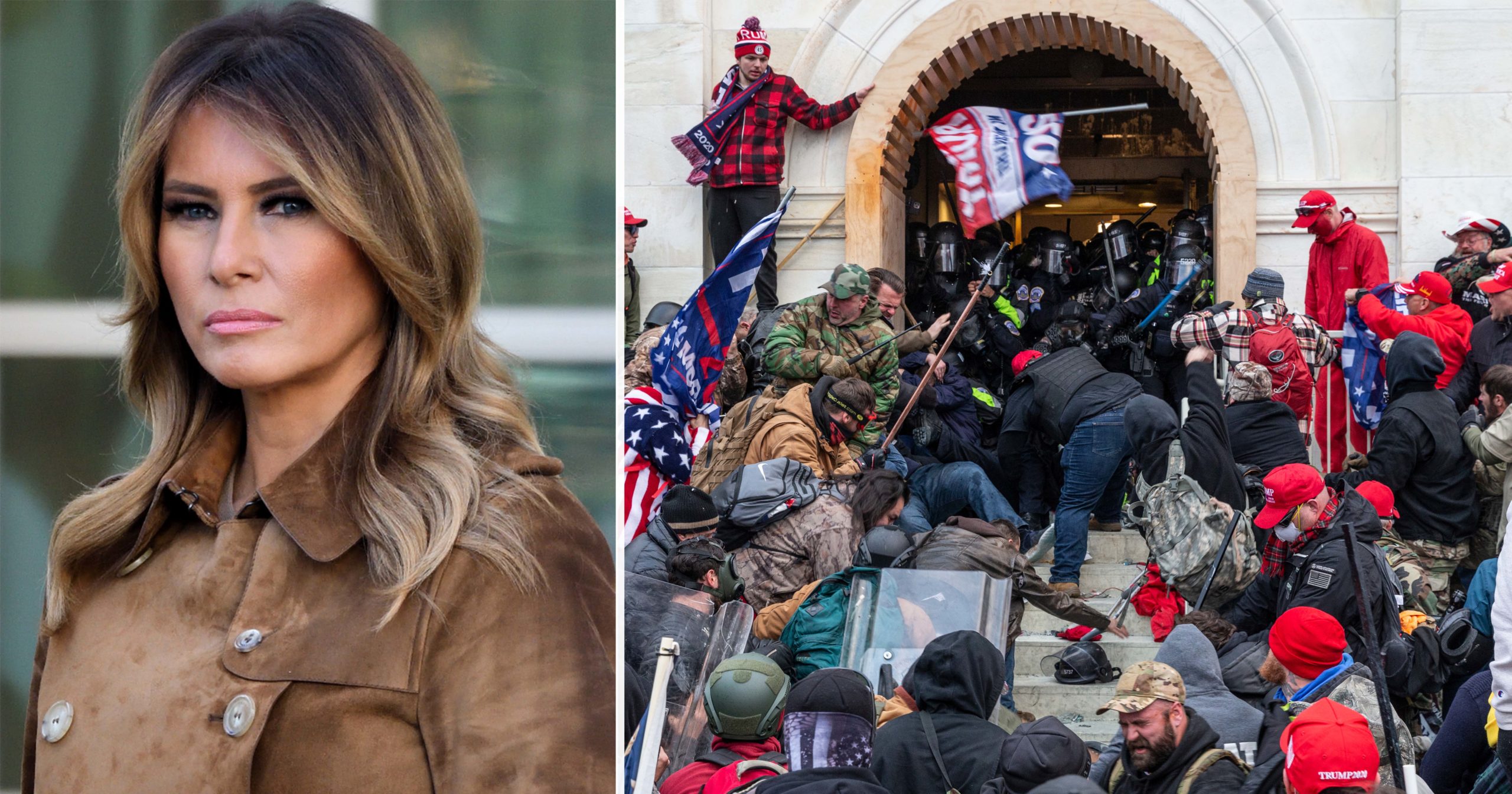 The scenes that emerged when an angry mob descended on the Capitol to protest President Joe Biden’s win on Jan. 6 are images that will forever be etched in our memories.

As a team of around 30 officers tried to battle to protect the building and those that serve within, they were outnumbered against the 15,000 or so that descended on the Capitol that day.

The pro-Trump supporters held the protest just weeks after the then President Donald Trump predicted the protest would be “wild” in a Tweet on December 20, which has since been removed.

One week after the event in which 5 people died former President Donald Trump condemned the rioters.

“I want to be very clear. I unequivocally condemn the violence that we saw last week. Violence and vandalism have absolutely no place in our country, and no place in our movement,” Trump said in a video posted by the White House’s official Twitter account, as per CNBC News.

Now it’s emerged that the then first lady Melania Trump declined to call for peace and non-violence on the day of the attacks, according to CNN.

Protesters broke through police lines and into the Capitol building where law enforcement officers were outnumbered and lawmakers hid under their desks to protect themselves.

Members of Congress were forced to go into lockdown as they feared for their lives while the halls of government were vandalized.

As the events unfolded two miles away on Capitol Hill, Melania Trump was overseeing a photo shoot of a carpet she had installed, as per CNN.

Trump’s aide Stephanie Grisham said she sent her a text that said, “Do you want to tweet that peaceful protests are the right of every American, but there is no place for lawlessness and violence?” to which Melania Trump replied with one word: “No.”

Grisham made the claim in her upcoming book “I’ll Take Your Questions Now,” as per CNN citing portions published in Politico.

Trump released a statement in response to Grisham’s claims saying: “The intent behind this book is obvious. It is an attempt to redeem herself after a poor performance as press secretary, failed personal relationships, and unprofessional behavior in the White House. Through mistruth and betrayal, she seeks to gain relevance and money at the expense of Mrs. Trump,” as per Politico.

Grisham served as a loyal Trump deputy for multiple years, serving briefly as White House press secretary before becoming Melania Trump’s chief of staff for the last year of the administration.

But within hours of the text exchange Grisham resigned, as per Politico.

Protesters stormed the Capitol on the day Congress formally counts the electoral college votes, and police were forced to escort senators and representatives from the chamber where the count was taking place, adjourning the session.

According to the then chief of the US Capitol Police Steven Sund thousands of “criminal” rioters “attacked officers with metal pipes”, other weapons and “discharged chemical irritants.”

He said in a statement officers responded “valiantly against thousands of individuals involved in violent riotous actions.”

He said the “violent attack on the U.S. Capitol was unlike any I have ever experienced in my 30 years in law enforcement here in Washington, D.C.

“The actions of the USCP officers were heroic given the situation they faced.”

Donald Trump became the first president in US history to be impeached twice, after being charged with “incitement of insurrection” over the deadly storming of Congress. He was acquitted by the Senate with a vote of 57-43 after a five-day trial.

So far 649 people have been arrested and charged with crimes related to the events on January 6, according to an Insider article published last week.

There were many opportunities to condemn the violence that we all witnessed that day; what our boys in blue endured that day is inexcusable, with so many risking their lives to protect our most sacred symbol of democracy.

What do you think about the revelations that emerged from the former Trump loyalist Stephanie Grisham? Post your thoughts on our Facebook page and share this story.