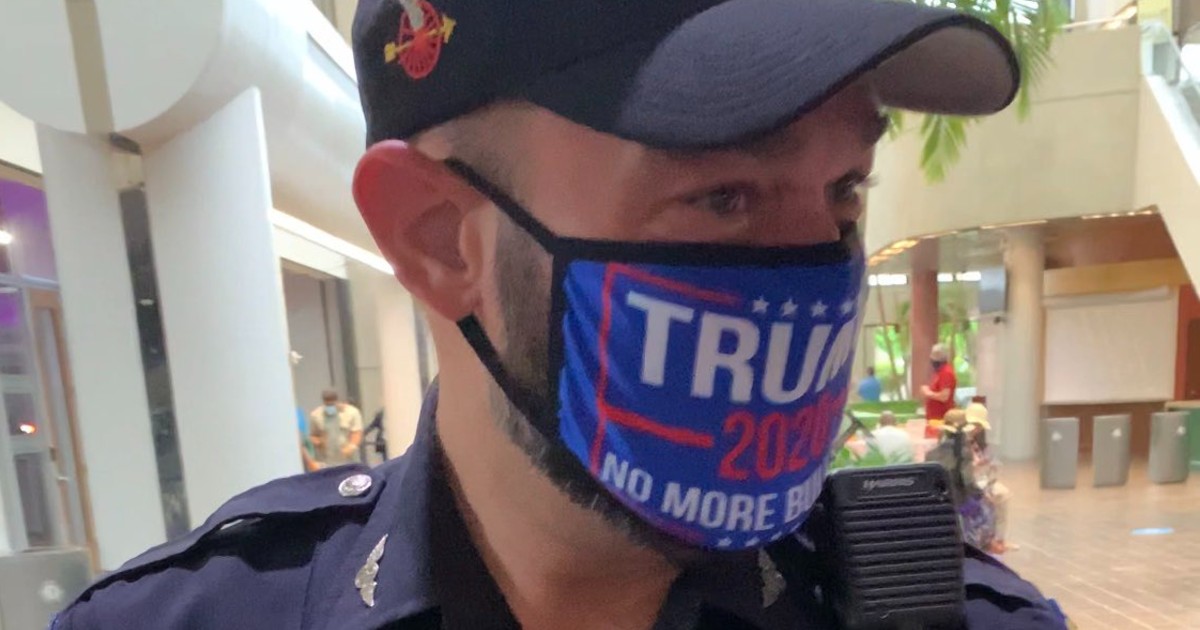 According to the U.S. Elections Project, which is tracking the number of people who have voted in the 2020 election, nearly 40 million people have already cast their ballots.

And election day is still a week and a half away.

As eager Floridians waited in long lines at their polling locations to cast their ballots, at least Florida man caused an uproar by potentially intimidating voters.

“It’s a violation of departmental orders. A police officer is supposed to be impartial,” Miami Mayor Francis Suarez said. “Irrespective of who the person was, whatever sign it would have been, it would’ve been problematic.”

On Tuesday, while walking through the lobby of the Stephen P. Clark Government Center, Steve Simeonidis, the chair of the Miami-Dade Democratic Party, saw a uniformed police officer standing near a line of early voters wearing a pro-Trump mask.

“I just said, ‘Excuse me, officer, I just want to take a picture,’ and he made some snide comment,” Simeonidis told BuzzFeed News. “He called me ‘sweetheart’ or something like that — just complete disregard of the fact that he was intentionally intimidating voters at the polling location.”

At first it was unclear why the officer, identified as Officer Daniel Ubeda, was at the polling location, but it was later determined he was off-duty and participating in early voting.

Simeonidis also claimed that in addition to intimidating voters, Ubeda was breaking a Florida law.

‘It’s important for police to be perceived as impartial.’

The Miami Police Department is handling the incident.

Deputy Police Chief Ron Papier told the Miami Herald “appropriate disciplinary action” would be taken, though it was unclear what that means.

Not only is wearing a political mask or apparel a violation of the Miami Police Department’s policy, but in many states it is also against the law.

Many states have restrictions on what can and can’t be done within a certain distance of a polling location so as not to intimidate voters.

You may be asked to leave if you show up with political attire or you could be prosecuted.

Voter intimidation is completely unacceptable. No matter who you vote for, you should not be allowed to intimidate people at the polls.

Share this if you believe this officer should be disciplined for not following the department’s rules and breaking Florida law.