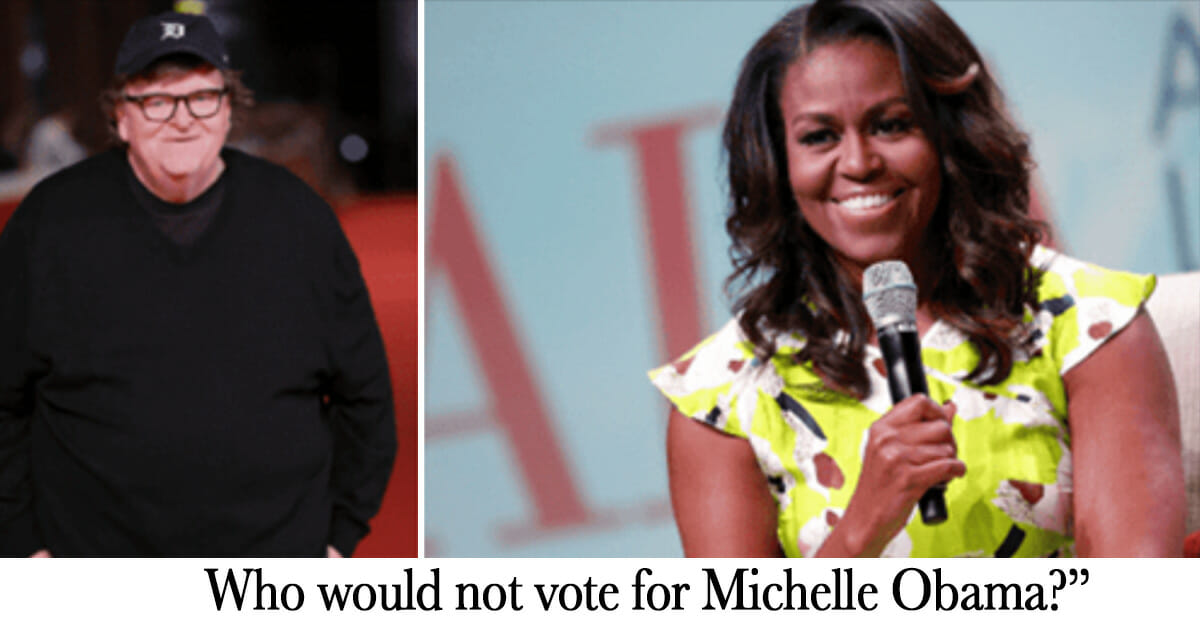 Love her or hate her, few can deny that Michelle Obama is an extremely popular figure.

So popular, in fact, that murmurs have persisted in suggesting she could be a good fit to ascend to the position her husband Barack relinquished after two terms in 2017. That is to say become the President of the United States.

Well, she certainly has those who doubt her suitability for the role, but there are also many who think she might just be what America needs. Michael Moore, it seems, is one of them.

Here we are, up to no good. Actually, up to hopefully a lot of good. Mark’s group, “We Stand United”, met last night to present plans for the 2020 election. We have many roads that lead to victory. Millions will participate. Everyone off the bench!

Some may remember back in 2016 that Moore predicted Donald Trump would beat Hilary Clinton against all odds. Well, he’s now endorsing Michelle Obama, stating his belief she is the best shot the Democrats have of beating Trump in 2020.

According to The Hollywood Reporter, Moore dropped a huge hint at a dinner organized by the Michigan Chapter of the National Lawyers Guild. He might not have officially name-dropped Michelle, but there can be no mistaking who he was referring to.

“Are you figuring out who this is?” he said. “You already know! A beloved American! They love her more than her husband — and they loved him!”

.@MMFlint has jumped the shark. He just said @MichelleObama Obama should run for President, that she is beloved by all and would win.

What’s more, Moore thinks that by opting for Barack Obama’s vice president Joe Biden, the Democrats are repeating the same mistake they made when backing Hilary Clinton.

“Democrats need beloved figures running. Say what you want about Trump, but tens of millions watched his show. As things stand right now, everybody should operate as if it’s a two-term Trump,” he explained.

Growing up, every time I’d come home from school with a story to share, my mother was there with a snack and a listening ear to hear about what was on my mind. When I came home with a tale about my disastrous second-grade classroom, she marched into the school to figure out what was going on. And as I grew older, including up through my years as First Lady, she was always there for me as a guiding light through whatever fog was clouding my path. She’s always listened more than she lectured; observed more than she demonstrated. In doing so, she allowed me to think for myself and develop my own voice. From an early age, she saw that I had a flame inside me, and she never tempered it. She made sure that I could keep it lit. Mom, thank you for kindling that fire within me, and for your example as a mother and a grandmother to our girls. We would never be who we are today without you. #HappyMothersDay, Mom. Love you. ❤️

Of course, while it’s all well and good of Moore to suggest people like Michelle Obama, she’s not the only one to have previously ruled out running for the job. As The Hill report, Michelle said: “It’s good to get out of the house. So far, so good — it hasn’t been that long since we left. … It’s good to not have the weight of the world upon your shoulders.”

What do you think? Would Michelle Obama make for a good president of the United States? Let us know in the comments box below.

Meanwhile, share this article if you think she should run in the elections!