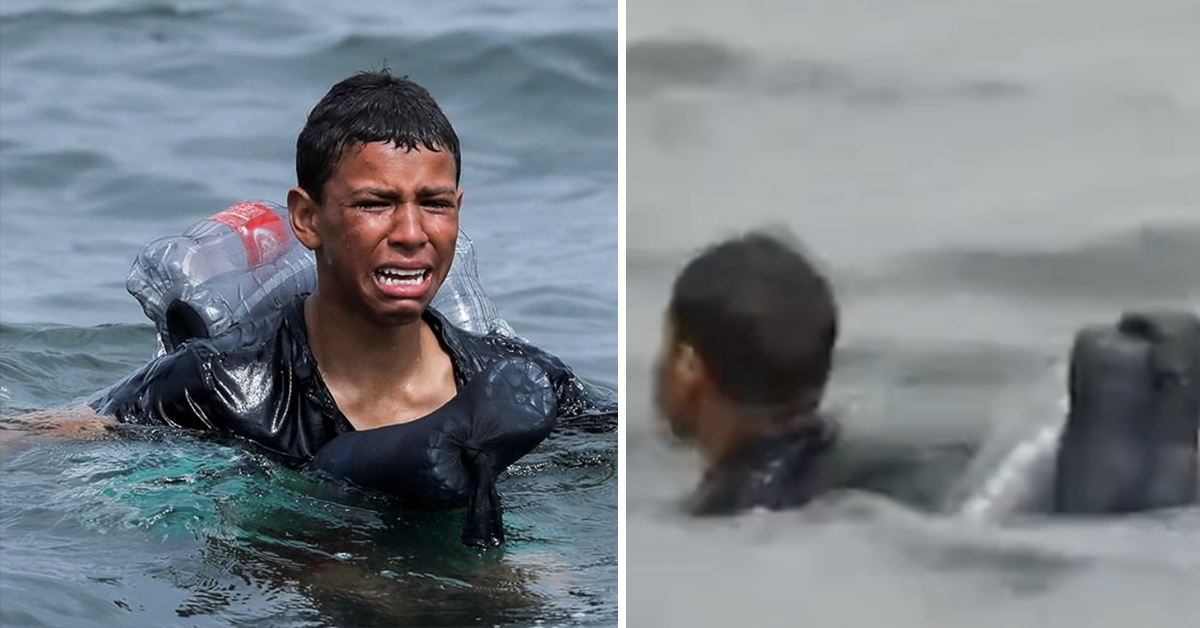 It was a heartbreaking scene that touched millions around the world – a 14-year-old boy crying as he tries to stay afloat in the ocean while making a perilous journey to a new country.

He had no idea what was going to happen to him when he reached the shore after he migrated alone from his home in Morocco, telling those on the shore that he had no family left.

The young teen was caught on camera crying while using plastic water bottles to stay afloat as he made the dangerous journey to the Spanish enclave of Ceuta in North Africa.

The city is 40 miles across ocean from Gibraltar which is British overseas territory on Spain’s south coast.

Thousands have swum or climbed over a fence to make it onto European soil in recent days, according to British newspaper the Independent.

The youngster tied the empty plastic bottles to his body in an attempt to stay afloat. The video shows him removing the bottles when he reaches the shore and running across the beach to scale a wall.

“He didn’t want to go back, he didn’t have any family in Morocco, he didn’t care if he died from cold; he preferred to die … than go back to Morocco,” soldier Rachid Mohamed al Messaoui said as per India Times citing Reuters.

Soldiers then catch up with him and take him away. It’s not clear what happened to him after. Deporting minors is illegal in Spain.

The rush of migrants into the Spanish city began on Monday when Morocco appeared to loosen border controls.

About 6,000 migrants managed to cross from Morocco to the tiny Spanish territory of Ceuta by Tuesday. Many of them swam. One young man drowned as he tried to reach the enclave, as per DW.com.

Around 1,500 migrants who made the crossing are believed to be children and teenagers.

Spain sent troops to the area and detained thousands of migrants who tried to enter the city by water or over fences. Most of these have been sent back to Morocco.

I can’t imagine being so desperate I would risk my life to make this journey, leaving my home and not knowing what awaits me in a strange new country as an adult let alone a 14-year-old.

It’s heartbreaking to watch this exhausted and distressed teen go through such an ordeal. I hope he can forge a better life in a new country and he is safe from harm.