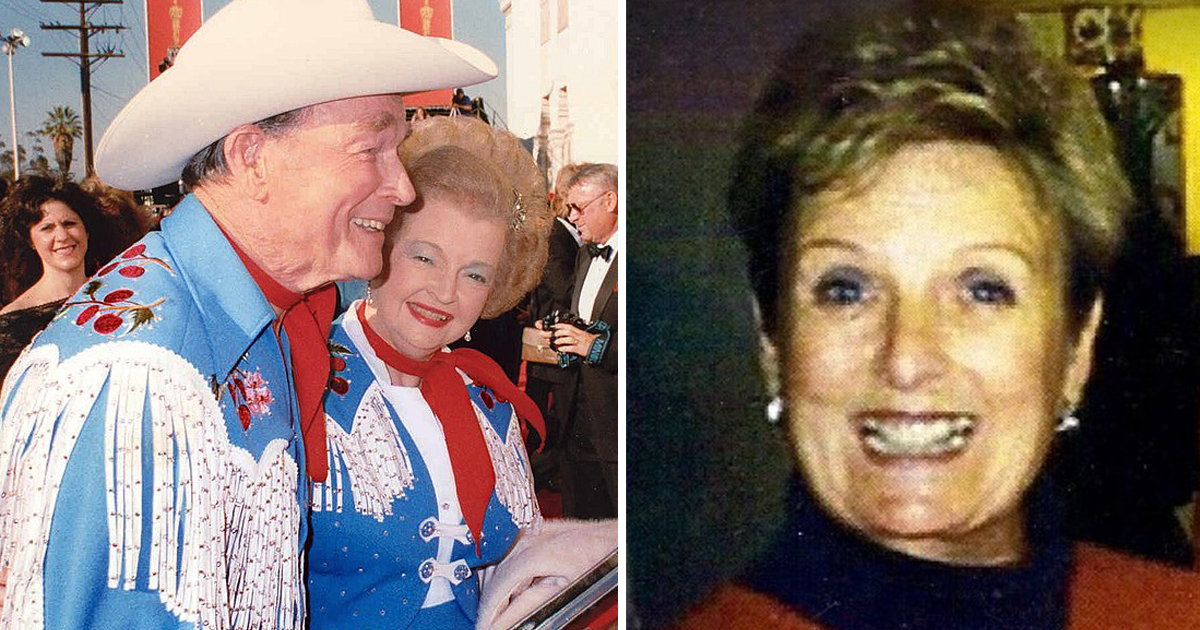 It’s no understatement to say that Roy Rogers was the king of the cowboys and western movies during his era. Between 1943 and 1954, he was voted the most popular Western star and when I was growing up, Rogers was a great hero to all of us kids.

His enormous popularity in films was one thing, but he also was a very successful country music singer.

Roy Rogers was one of of those singers that still had a great voice right to the end of his career.

But it wasn’t often that Rogers sang alone -– Dale Evans was his partner in life and on stage, always by his side.

I could go on and on about Rogers and Evans – they were really one of the most inspiring and beautiful couples in music.

However, I think the most important part to remember is that Rogers and Evans were not only stars, but fine people as well.

The story of one of the couple’s daughters, Mimi Swift, is a great testament to Rogers’ and Evans’ social commitment and big hearts.

Marion Fleming, who everyone calls Mimi, was born in Scotland in December 1940 – right in the middle of World War II. In fact, Mimi was born in an air-raid shelter and that was just the start of her shaky life. After she was born, her mother placed Mimi in various orphanages, but at the age of 13, her life would change forever.

It was then, while Roy Rodgers and Dale Evans were touring the UK, that the couple discovered Mimi at an orphanage run by the Church of Scotland.

The fact that two big movie stars were visiting Scotland was of course a huge thing for everyone in the country – people crowded the streets to get a glimpse of Roy Rogers and his horse, Trigger.

As on all their tours, the couple took the opportunity to visit an orphanage and it was there that fate would bring Mimi, Roy, and Dale together.

Mimi had the honor of singing a song during their first meeting, “Won’t You Buy My Pretty Flowers?” and Rogers and Evans were instantly hooked and couldn’t stop thinking of the cute little girl they just met.

Flew to California in her kilt

They wanted to take Mimi home to the United States. At that time, things were not as complicated when it came to adoption. Two weeks after their first meeting, Mimi packed her bags and jumped on a plane to California wearing a traditional kilt.

Mimi became Rogers’ and Evans’ fourth foster child. She was welcomed with open arms and would not return to Scotland until she married herself.

The fact that Mimi wanted to get married in her birth country wasn’t that strange. According to her, Rogers and Evans encouraged her to keep in touch with her roots and Mimi wrote several letters to her biological parents.

“Mom and dad always thought it was important to stay connected to your roots and this sentiment prompted my latest visit,” Mimi said in 2019.

They had not abandoned their daughter, but no one had the opportunity to take care of her and therefore she had to live in an orphanage. Her birth parents visited her orphanage, but when Mimi got the chance to go to the US, she didn’t hesitate.

Roy and Dale were initially unable to adopt Mimi. Instead, she was allowed to be in the United States on a student visa, before Roy and Dale received legal custody of her.

Didn’t want to go back

She became part of a large family. In her younger years, she didn’t want to go back to Scotland.

She had found her place with Roy and Dale and her new siblings, John David (Sandy), Mary Doe (Dodie – also a Hope Baby) and Debbie.

Roy and Dale also had their own child, Robin, who had Down syndrome. Unfortunately, she died tragically just before her second birthday.

“After Robin passed, that’s when mum and dad got Dodie and Sandy,” Mimi told BBC. “I probably owe my position here in America to Robin, in a way.”

Mimi has often spoken about how it was growing up with Roy and Dale – her interviews provide a unique insight into the family life of one of the biggest celebrity couples of all time.

“When we were in the house we were just a family, they were not Roy Rogers and Dale Evans, they were mum and dad,” she says.

I often say that Roy was the cowboy with a purpose. He often said things like, “I had a responsibility to my audience, and I tried to respect that.”

He knew that he had an influence on children (and adults) and he wanted to use that influence for good. Most actors just fill a role and draw a paycheck. Roy was in the business of changing lives for the better, and he did!