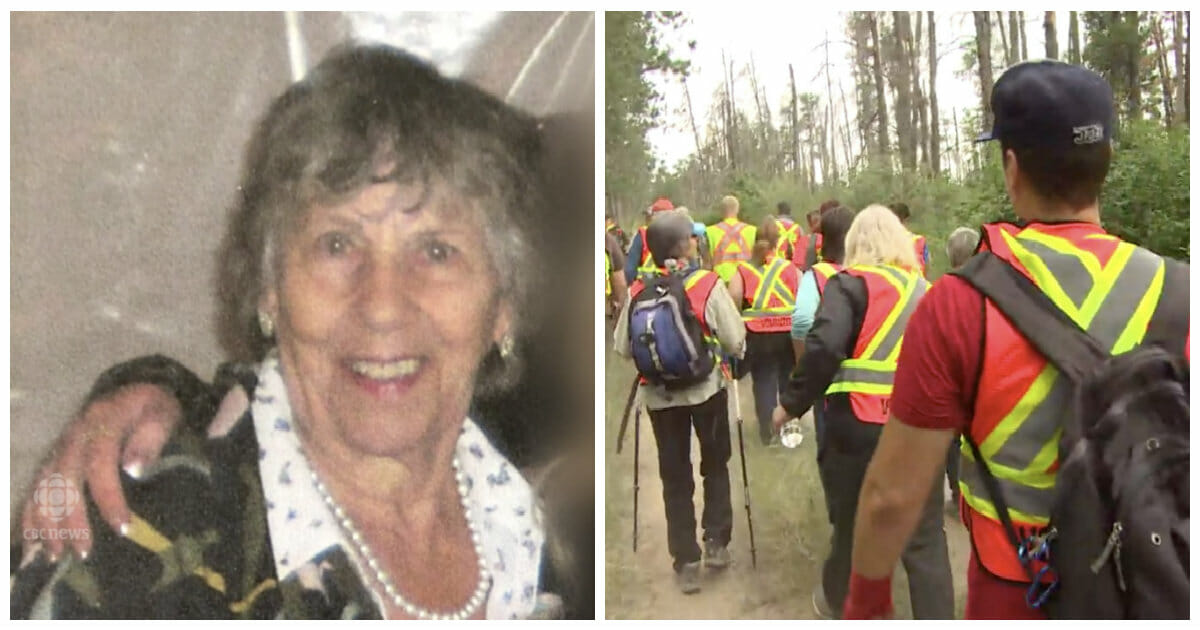 It was a harrowing few days for the family of Mary Byman, an 84-year-old Canadian woman who went missing without a trace this week.

But after a long search effort, Mary was finally found—and apparently hasn’t lost her sense of humor or zest for life after the whole ordeal.

Last Wednesday, Mary was on a blueberry picking trip with her friend in the Spur Woods in southeastern Manitoba. She had been to this same spot many times before—but for some reason, on this trip, she suddenly vanished.

There was no trace of her anywhere nearby, and her family feared for the worst.

“Were all just hoping we can find her,” Byman’s daughter Maureen Geurts told the CBC on Friday. “I’m worried about exposure, I’m worried about her passing away in the wilderness and not finding her. No matter what, we hope to find her.”

About 100 volunteers joined the search party. Search dogs were sent in, and planes and drones flew overhead. Still, nothing.

People were baffled as to how an elderly woman may have gotten so far out of the way.

“It’s as if she disappeared into thin air,” volunteer Len Friesen said. “She was 84 years old. She couldn’t exactly run a mile through the bush, so where is she?”

After the search was officially called off, a woman named Crystal Leigh and her husband arrived and enlisted the help of Darryl Contois, who runs a rescue team called the Evelyn Memorial Search Team, the CBC reported.

Then, a miracle happened. Contois says that he and his son were hunting a deer, and after firing the gun he heard someone yelling for help.

He headed towards the voice with his search party, and there they found Mary, resting beneath a tree, about 1.5 miles from where she started.

The rescue party was thrilled, and Leigh rested with Mary before they took off for home. She says the elderly rescuee had an unexpected request: “A cold beer and a hot tub.”

“She was just in the best of spirits,” Leigh said. “She kept her sense of humor.”

Apparently Mary promised to stop blueberry picking, but her family knows the ordeal hasn’t slowed her down one bit.

“My mom will be blueberry picking til she drops,” her daughter Sherry Lyn Marginet told CBC.

Clearly, she hasn’t lost any of her spirit—or her sense of humor.

“First thing in the morning when I got a hold of her, I said, ‘You know, you’re one tough bird.’ She says, ‘Oh yeah, I am,'” Marginet said. “She’s just a hearty person who loves life, and she has tenacity and she wouldn’t give up.”

Mary is currently in the hospital, but if she hasn’t gotten her cold beer yet, she will soon: Leigh and her husband John Friesen said they were going to visit her with a case of cold ones.