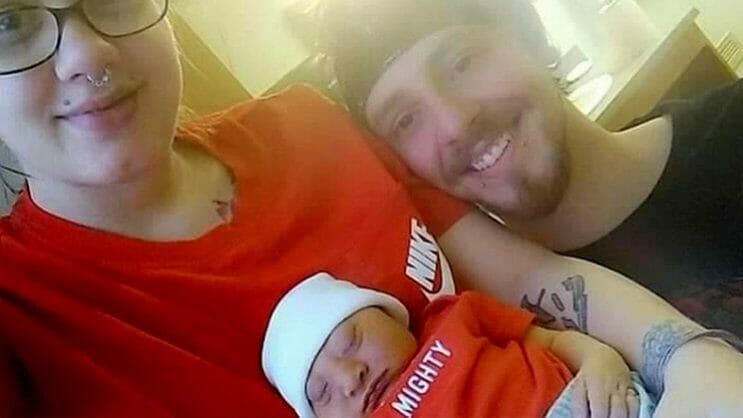 Being a mom is one of the most beautiful things in life. From the moment a woman learns she is having a baby, to the time of birth, it’s a roller coaster filled with countless emotions and expectations.

Krysta Davis, 23, was 18 weeks pregnant when she went to the doctor for a check up. She didn’t know it then, but soon she was to be faced with a terrible situation concerning her unborn angel.

Unfortunately, Krysta’s unborn baby was diagnosed with anencephaly, a fatal neurological defect in which parts of her brain and skull were not fully developed. It was a message from the doctors that no parent should hear, a nightmare that became fully real. Krysta’s little daughter would not survive; normally babies with this defect usually stay alive between five minutes and five days outside the mother’s womb.

When Krystas gave birth to her daughter, Rylei, the brave little girl amazed the medical team. The strong little girl survived for a week and left a big impression during her short time on earth. She may have passed away after a week, but she was able to spread more light and love than many people do in an entire lifetime.

Rylei wasn’t Christa’s first pregnancy. In an interview with the Daily Advertiser, Krysta explained her traumatic years before Rylei’s birth. Two years ago, she lost her first child after a miscarriage.

Once again suffering tragedy during her pregnancy, Christa’s heart shattered into a million pieces. She had already lost one child, but losing two? The thought of that was unbearable.

That’s also why Krysta was extra nervous when she was expecting Rylei. She was afraid of losing another child. So then you understand how hurtful it must have been when she was told that Rylei had a brain defect and would not survive.

“They called me about my quad screen,” Krysta says.

“They said it came back abnormal, they suspected a neural tube defect like spina bifida. I went to see a high-risk doctor and noticed that the nurse was acting strangely while checking me. She spent a lot of time looking at Rylei’s head. But when they told me it was spina bifida – it was anencephaly. “

Given the situation, doctors gave her two choices. She could either give birth to Rylei in week 18, or Krysta could let her daughter continue to grow in her womb and develop organs that would become a lifeline for other children struggling for their lives.

“We followed up with another doctor,” Krysta explains, “and we were told that if I carried to term, I could donate Rylei’s organs, and possibly arrange to meet with the kids who get them. At that moment, Derek and I looked at each other and knew what we were going to do. I may not have been able to take my baby home, but I could maybe use her life to give other mothers the chance to. ”

Eventually, Krysta decided: she planned to let Rylei stay in her belly. Knowing that her daughter would save other children gave her some comfort, so she decided to pursue the pregnancy.

On December 24, little Rylei came to the world. She weighed 6lbs and was 19 inches long. She had some help to keep her heart going, but still showed incredible strength for a baby born under such difficult circumstances.

Right from the first moment, Rylei was a beloved little angel. Her parents were crazy in love with her and tried to spend every second with their child. Because she lacked large parts of her brain, she could not express so many feelings, but, according to her mother, Riley had a rather hot temper and made angry faces often. All the parents could do was watch and love their baby unconditionally.

“She has a great temperament,” Krysta says. “She doesn’t cry, she makes little stink faces … nobody expected her to make it this long. We are still in shock … I am still wary, but it never ceases to amaze me. She’s just been so great.”

“After they cut her umbilical cord, I laid her on my chest, skin to skin, I was rubbing her and crying because I was so in love,” Krysta says. “She was so perfect and beautiful to me. Her brain voice was exposed. But I didn’t even care or notice, I was just so in love. ”

On New Year’s Eve, a week after she came to the world, Rylei ascended to heaven. According to the doctors, it was a miracle she managed to stay alive for so long. Her parents got the chance to hold her, hug her and take care of her. They felt peace thinking some other children would be saved thanks to their daughter.

Krysta and her boyfriend Derek decided to donate two halves of Rylei’s heart to two other babies. Her lungs were donated to a research institute for further studies.

Her life may have been short but Rylei got the chance to spread so much love and hope to both her own parents and other children. What an angel!

What a beautiful thing you both have done for other children that need help. My heart goes out to you both and your baby. Always know that your baby lives on somewhere else being loved and cared for. A smile in remembrance goes a long way in healing for you both. 👼💞👼💞