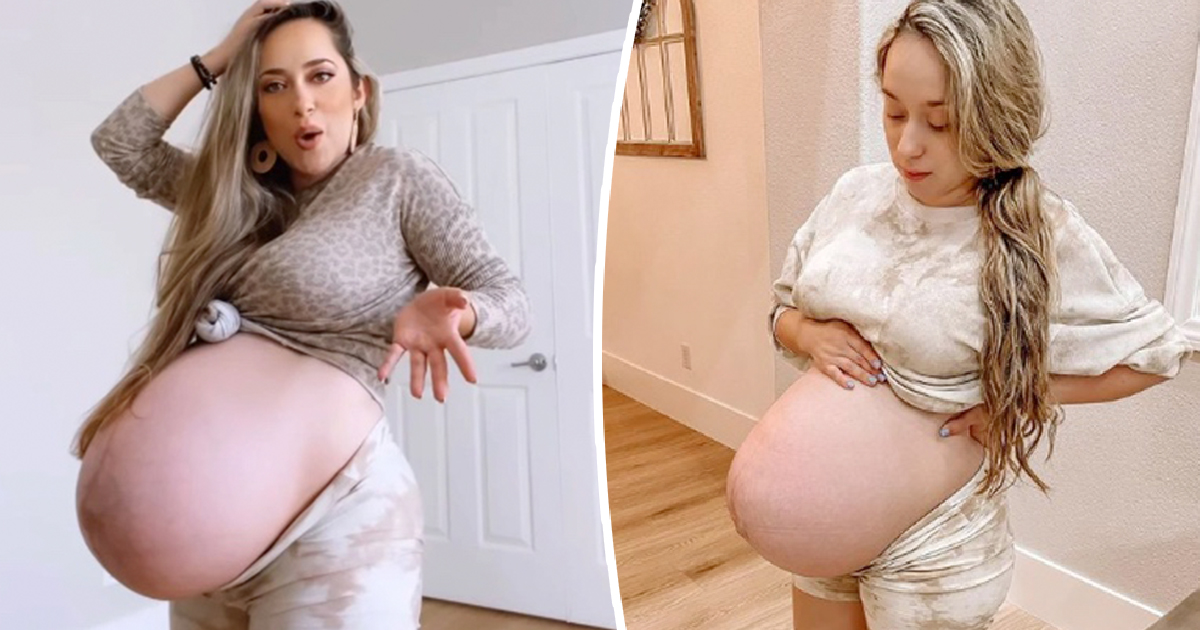 The nine months of pregnancy that every expectant parent goes through can be as exciting as it is nerve-wracking.

Everything that happens in the mother’s womb during this time affects the growing life that’s about to be brought into the world.

Uuntil the child is born, there are, of course, many things that happen to the female body. Everyone is affected differently during pregnancy, some feel worse than others, and some get huge bellies compared to others.

The latter is precisely what Eliana Rodriguez experienced when she was expecting her child. When she shared her pregnancy journey on social media, it didn’t take long for people to make accusations, especially after Eliana showed her unique belly.

Overall, Eliana was accused of lying about one specific detail…

It’s an incredible miracle that a human can carry another human. As a mother, one is often told that no two pregnancies are the same – each mom has a unique experience of what it’s like to carry a baby in her belly.

During the months that the little life grows, an individual is formed, with its own dreams, personality, and unique appearance. Just the fact that there’s a tiny life in there is incredible.

Expecting a child places a major strain on the female body, both mentally and physically – just ask Las Vegas mom Eliana Rodriguez. When she was expecting her second child, a son, many emotions were in the air.

Of course, she was excited about the birth, but like any parent-to-be, she was also a bit nervous.

Like many other mothers, Eliana also wanted to share her pregnancy journey with the world. On her Instagram page, the 29-year-old mother diligently documented everything that happened around her pregnancy and her feelings. One of the reasons she got so much attention, and soon amassed a large following, was her giant belly.

Pregnant for the second time in her life, she thought she could handle everything. She thought she knew just what to expect. But she was wrong.

There was one thing she didn’t see coming.

After sharing pictures and clips of her belly just a week before giving birth to her son, comments came charging through that door.

Eliana’s growing belly received enormous criticism and uninvited comments. Many questioned whether she only had one child in her belly. The mother didn’t give a medical explanation for her giant stomach – which led to even more rumors and theories.

People could say things like: “You are huge” “Why her stomach look like that?” “Omg it was just one baby???????” and “It’s like she doesn’t have ANY stomach muscles to support the weight of the baby.”

According to The Sun, people asked Eliana if she and her husband, Cesar, had failed to check if more children existed in her belly.

Many also wrote that she looked ”too fat” only to be expecting a child and must be in incredible pain with such a big belly.

‘Never seen [someone’s] pregnancy belly get this way unless there was twins!!!’ one person wrote, while another said: ‘I have [never] seen anyone able to lift their baby like that in their tummy.’

The constantly commenting on her bump and the harsh words made Eliana very sad. All the negativity did affect her during a time when she should have felt just joy and excitement.

“I was so excited that I wanted to share—we had been trying for a second baby and hoping for a boy and I am an open person,” she told Today.

Opinions on bodies can definitely put vulnerable people in a dark place. If you ask me, pregnant bellies are the most beautiful bellies of them all – but apparently, some people don’t agree. But why do you say that to a mother who is expecting?

Finally, Eliana decided to put her foot down and clarify one thing. Eliana’s size was normal, considering she measures 4’11” with a short torso, and the doctors said she had nothing to worry about.

Still, some people could not help but comment – they felt a need to criticize the mother.

After she spoke up, she received a lot of support. Her followers thought that she was in her full right to address the mean comments.

“Twins or not twins no one should harshly judge, or negatively comment about a woman’s pregnant belly… different women are built differently,” one Instagram user wrote.

“It’s SO annoying. I’ve noticed people say this to almost every pregnant woman… There’s a whole baby in there, what do they expect,” one person wrote in her defense.

But actually, there was a reason for her huge belly. During her pregnancy, Eliana carried a lot of amniotic fluid. The amniotic fluid inside the amniotic sac helps cushion the baby during pregnancy from bumps to your tummy.

“Pregnancy can come in all shapes and sizes, it’s something we cannot control, and to have someone say I look gross is shocking especially from another woman,” Eliana 7Life said and added:

“As women we should uplift and empower each other, not the opposite. Pregnancy is a beautiful journey and such a special moment.”

However, there were concerns that Eliana might have polyhydramnios, a condition with too much amniotic fluid around the baby during pregnancy. At the hospital, several routine tests were performed. But according to Eliana, her doctors said it wasn’t enough to be diagnosed with the condition.

“They did check the amount of fluids and checked the baby’s size,” she said.

Because Eliana’s husband was very big at birth and weighed almost 11 pounds, the couple prepared to have a giant son. Looking at Eliana’s belly, it certainly looked like there was a big boy inside.

“I wasn’t surprised of how big I carried because my first pregnancy was exactly the same!” Eliana told 7Life.

But at the delivery, the parents were stunned.

When her son Sebastian was born on June 11, at Centennial Hills Hospital Medical Center. Although everything looked good before the delivery, everything turned into a dramatic twist a the hospital.

Everything was going according to plan, but suddenly her son’s heart rate dropped really low and within minutes Eliana was being rushed to an emergency C- Section.

But she remained calm and in faith.

”I prayed so much.. I felt God’s presence. Yes it was a scary moment seeing about 9 people rush to get me prepped for surgery, I saw Cesar almost break down in tears.. but I took a deep breath and remained calm because it is HE our God who is always in control. ✨,” Eliana explained.

But soon her baby’s heart rate went back to normal and the doctors called off the emergency C-Section. Eliana and her husband were sent back to their original room and within a few hours, Sebastian came into the world naturally – with less than 2 pushes.

”He basically slipped out on his own! It was absolutely perfect! 😭😍🙏❤️ God is so good! I’ve been in so much gratitude and enjoying every moment. This experience was one for the books,” Eliana said.

Their son weighed just 8.3 pounds and was 20.5 inches in length. Most important of all though, her baby boy came into the world healthy!

Congratulations to the whole family thank you for sharing your story Eliana! Every woman carries their baby differently, and there is nothing wrong with being proud of your bump!