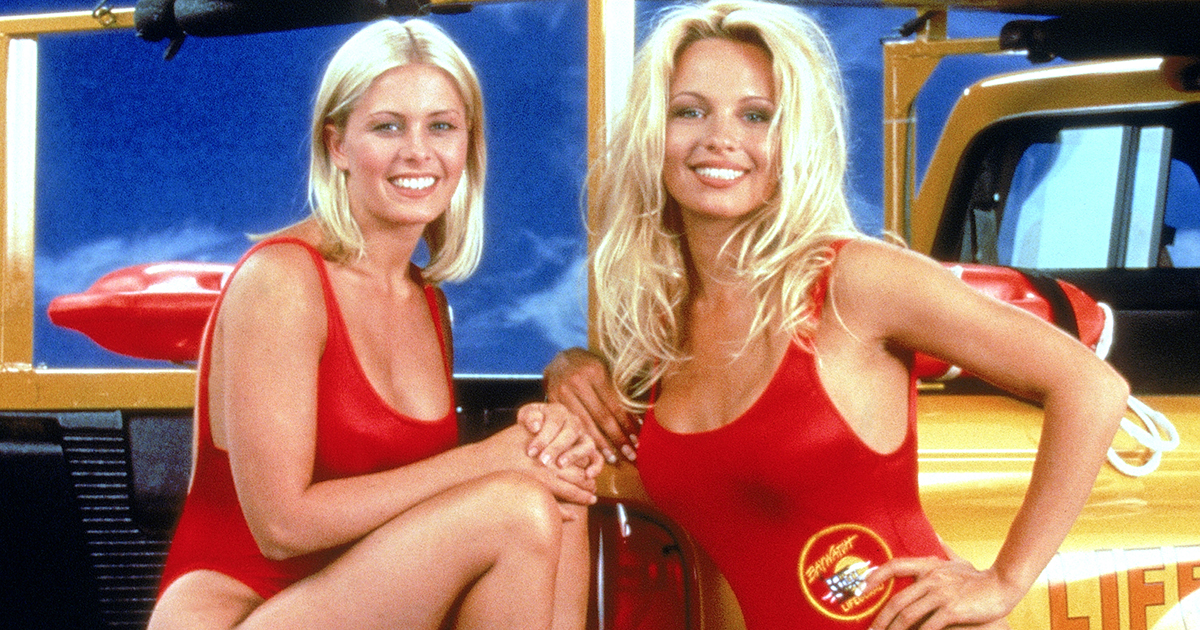 Baywatch was one of the most-loved series of the 90s, and many stars were born at the height of its fame. The first names that come to mind are probably Pamela Anderson and David Hasselhoff – but how many remember the blonde bombshell Summer Quinn?

Summer was portrayed by actress Nicole Eggert, and according to some fans she was the hottest Baywatch babe for several seasons.

But then something happened, and today the 50-year-old has withdrawn from the spotlight to focus on her children and other business.

What’s more, the ex-Baywatch star has chilly memories from her years on the smash-hit series – and the reason might surprise you…

She wasn’t a brat

Nicole Eggert, born in 1972 in Glendale, California, grew up in front of the cameras and on the beach.

She spent her childhood in Huntington Beach and was raised by her mom, Gina, a British-born talent agent, and her father, Ralph, a canning company executive born in Germany. Nicole also has a sister named April.

The talented Nicole made her entry into the entertainment industry early. At the age of five, her mother took Nicole to a beauty contest for children, where the young girl was crowned Miss Universe in the junior division.

An agent noticed the beautiful 5-year-old and offered her a role in a shampoo commercial for Johnson & Johnson.

“I was really spoiled, but I wasn’t a brat,” she said.

“My mom was strict at the same time.”

Reaching for the stars

The commercial gig with Johnson & Johnson kickstarted Nicole’s career, and by the age of eight she had landed her first movie role. In the American drama film Rich and Famous, she played opposite well-established actresses like Jacqueline Bisset and Candice Bergen.

The wheels kept on turning, and between 1985 to 1986, Nicole had a recurring role on Who’s The Boss. Then, one year after leaving the show, the California native got her big breakthrough.

Through portraying Jamie Powell in the situation comedy Charles in Charge, people noticed Nicole – she was widely praised for the wholesome role. Nicole, who was 15 at the time, starred alongside Scott Baio, who played the titular character in the series. According to the Hollywood reporter, Baio and Nicole also dated briefly in the late ’80s.

But their relationship was far from healthy, or even legal, Nicole later claimed. The actress said that her former co-star exploited her and accused Scott Baio, then 24, of a raft of bad things.

“He was manipulative, controlling. I learned young what men can be like. I thought I was in love, but I look back on it and laugh—ya know, one of those,” she told People in 1994.

In 2018, she opened up again about what happened, while Scott Baio has firmly denied the alleged incidents.

In 1992, Nicole Eggert started appearing in the cult series Baywatch, known for its attractive lifeguards and slow-motion runs on the beach. While starring as lifeguard “Summer Quinn,” she gained worldwide fame.

But it came at a price.

First of all, it meant shooting scenes in the freezing Pacific at 6 a.m. Fighting to get to wear a jacket wasn’t the most fun thing to do.

But there was also another aspect.

“I’m not an active feminist, but being on Baywatch was against everything I am morally,” Nicole told Entertainment Weekly in 1995.

The young actress also had to live with being put in a box. She was just a teenager when she joined the cast, and just like her co-star Erika Eleniak, Nicole later admitted that she wasn’t comfortable becoming a ‘sex symbol’.

“I didn’t see myself as a sex symbol at all. I felt more of the repercussions of being called a bimbo, which bothered me because I’m not and I never was…and far from stupid,” she said.

Nicole starred in 44 episodes as a series regular and was on the show during two seasons, the third and the fourth. She has also revealed several details from her spell at Baywatch; for example, she got breast implants at the age of 19 in preparation for her role as Summer. She said she only had the new, saline-filled implants for a month or so.

“They were way too big for what I asked for. I wanted a regular B-cup. I’d never had boobs in my life, and I would wake up and be like, ‘Oh, my God!’” Nicole said.

In an interview with People in 1994, Nicole claimed that she did her breasts “for herself.” But in 2015, she confessed that it was a decision based on her role in Baywatch, where the iconic, low-cut red swimsuit was an essential part of her lifeguard uniform.

“I was really, really small chested and to wear a one-piece bathing suit? Two-piece you can fake it, you can feel comfortable,” she said.

“But to put a one-piece on every day where it flattens you out even more, and there’s all these like, boobalicious women around you – I was 19, I was awkward – so yeah, I wanted boobs.”

After signing her contract with the Baywatch production, Nicole had a clause that stated she wasn’t allowed to go up or down five pounds.

In addition to the agreement on not gaining or losing weight, the Baywatch star also had to pass a swimming test.

“Everybody would get on my back about all the junk food I ate and that I smoked,” she said.

”I was unhappy, basically. I’ve been acting for a long time, and I somehow got caught up in all this ’Baywatch’ thing, and it’s not what I wanted to do or where I wanted to go. I just started getting known as this blond bombshell on ’Baywatch’. I was like: Okay, whoa!” she told Daily News after leaving the show.

After Baywatch, she went on to star in different TV series and TV movies. She made guest appearances on series like Married… with Children, Boy Meets World, and Gilmore Girls – but never reached the same popularity or recognition as when she starred in Baywatch.

In 2003, she reunited with old friends and colleagues when she reprised her role as Summer in the TV movie Baywatch: Hawaiian Wedding. It was a totally different experience for Nicole to put on the swimsuit this time.

After four decades in Hollywood, Nicole seems to have dropped her acting career. She made her last appearance in front of the camera in 2018, but had a voice role in the animated miniseries Robot Chicken, which aired in 2019.

Over the years, the Baywatch vet has also popped up in several reality TV shows such as Celebrity Fit Club and Botched. But it’s clear that her focus has shifted – today, the 50-year-old Nicole spends more time with her family and on other projects.

In 2014, she started her own business after buying an ice cream truck. The idea was to sell ice cream at private parties and events; her oldest daughter would work in the truck with her friends.

“The paparazzi got wind of it and, of course, blew it out of astronomical proportions that this was my new career,” Nicole said on OWN’s Where Are They Now? in 2015.

“I have definitely not given up my acting career to drive an ice cream truck.”

Nicole has never been married, but she has dated some famous actors. She was engaged to Canadian actor and teen idol Corey Haim. The couple had a relationship in the early ’90s and starred in several TV movies together.

“I never watched what [Corey] did but there definitely [were] issues,” Nicole said. “I held his hand when he wasn’t feeling well … I spent a lot of nights in emergency rooms with him. I don’t think that I saved his life, I just think that I was there for him.”

Nicole has raised two beautiful daughters, and she often posts pictures of them on social media. Her first daughter, Dilyn, was born in 1998. Back then, Nicole was dating actor Justin Herwick. According to several sources, he’s the father to Dilyn.

In July of 2011, the former Baywatch star gave birth to her second daughter, Keegan. The father is unknown.

In 2020, Eggert talked about her daughters when she was asked if Dilyn or Keegan would follow in her footsteps and pursue a career in acting.

“I have a 22-year-old, who wants nothing to do with it. She’s into fashion and photography. My youngest, she might get that bug. She definitely is a little actress and a little performer. But it will be when she is able to do it on her own. I don’t mind her practicing. I don’t mind her honing her craft or anything like that, but to actually put her on set is not something we are looking into doing,” Eggert shared in 2020, during an interview with The Morning Show in Australia.

Although Nicole has expressed dissatisfaction and criticism of Baywatch, she has a special bond with the show that changed her career and life.

On her Instagram, she frequently posts photos of herself as Summer. Nicole is still proud to have been a part of such an iconic series. She also helped make Baywatch: The Documentary during the pandemic, which premieres on July 4, 2022.

The documentary is aiming at showing how ”Baywatch became a trendsetting, culturally relevant phenomenon from 1989 that is still relevant today”.

”It was an escape for a lot of people who were going through a lot of things the world … the Berlin Wall was coming down, we had the L.A. riots, there were so many things that were going on, and it’s kind of full circle that we’re doing this [documentary] during the pandemic,” Nicole shared.