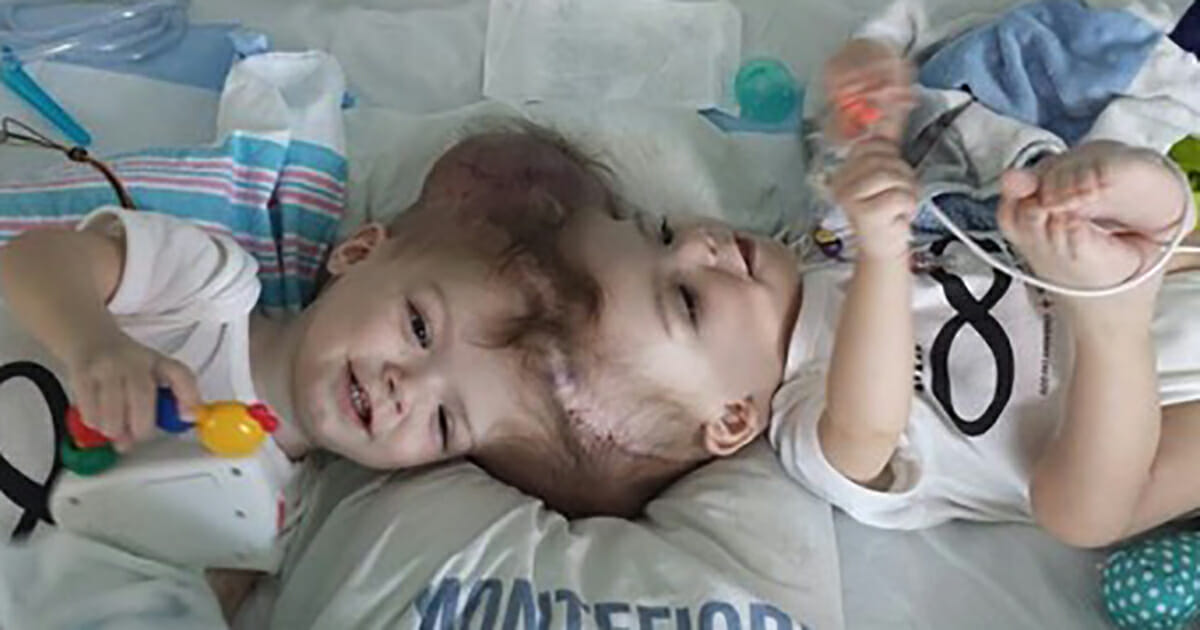 Twin boys Anias and Jadon McDonald were born conjoined and had no idea what each other looked like.

They were born fused at the crown of their heads and shared brain tissue and blood vessels.

But after a 27-hour operation the 14-month old boys were finally able to cuddle each other.

Three years later we look at how these two adorable boys are developing.

Despite the high-risk surgery there was an 80 percent chance the boys would have died if they hadn’t had the surgery before the age of 2.

The surgery was a success but the road to recovery has not been easy.

“Although his recovery has been bombarded with infections, fevers, and difficulty breathing and eating, I can say with absolute pride that today Jadon has almost fully recovered and is attempting to roll in his bed as we speak. He is nothing short of a miracle,” wrote his mother, Nicole McDonald, on a Facebook post.

In fact the boys’ recovery was the fastest ever recorded in the history of craniopagus twins separation, according to The Epoch Times.

Anias has had a tougher time than his brother as he suffered seizures and viruses.

“My Anias. Beautiful baby. His journey is going to be much harder than Jadon’s. I’m not sure why this child always has to climb the steep mountains, but he does. For the last four weeks, he has not moved much on his own, but has demonstrated the ability to move both arms and both legs when crying. I try desperately to hang onto all the positive progress he has made,” added Nicole.

After the difficult surgery, Nicole recorded her sweet boys hugging and talking for the first time and it’s a beautiful moment.

The family, which also includes dad Christian and older brother Aza, were captured on camera enjoying a family picnic together six months after the operation.

She shared the moment on Facebook and wrote: “All the bad days put together don’t hold a candle to how good this day was! See ya later sneezes and runny noses, fevers and extra oxygen.

“We are feeling good! All together and outside on an 80-degree day… Counting our blessings and moving forward.”

Nicole said Jadon, who is recovering more rapidly, is “like personality with feet,” whilst Anias, who is confined to a specially designed wheelchair, is the “blank canvas waiting to turn into a masterpiece.”

While Jadon can read words aloud, Anias struggles to speak and would suffer up to 15 seizures a day.

“We feel like our faith and our belief definitely carried us through.”

He said their ordeal has made them a stronger family unit.

“I think we’re getting stronger and better every day. I mean I guess they say you know, sometimes difficult circumstances,” Christian said.

”You go through the fire, you come out stronger on the other side and I think that’s definitely true for us. It’s definitely made us better as a couple.”

In August Nicole posted a picture of Anias sitting in a swing holding his head up, something that he had previously struggled to do.

I applaud both these precious boys for going through everything that they have, there’s nothing like children’s love ❤️ My prayers are with you.??