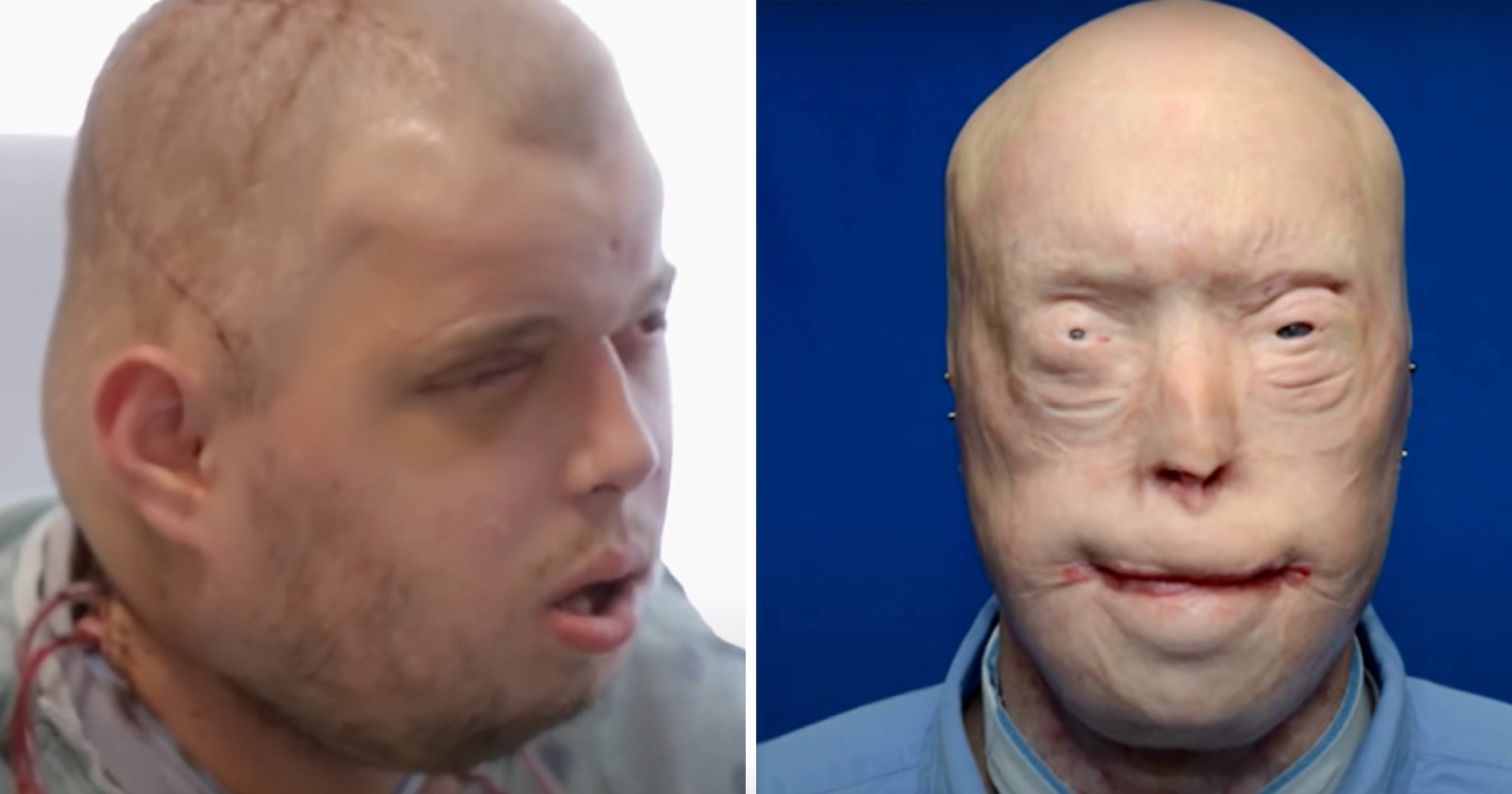 Patrick Hardison received devastating injuries in a house fire as he attempted to rescue a woman he believed to be trapped in the blaze.

This brave man was left with third-degree burns to his entire face and scalp – for years he wore a baseball cap, sunglasses, and prosthetic ears in public.

Patrick recalled children running away when they saw him, but his life changed again in 2015 when he underwent the most extensive face transplant ever.

As per reports, Hardison had a 50/50 chance of surviving the face transplant. However, the surgery – which took 26 hours and more than 100 people working in two teams – was a success. Today, Patrick Hardison is living life alongside his beloved wife and children.

Here’s all you need to know about his incredible story – and what Patrick looks like today.

Today, we have so much knowledge about the human body. Doctors, nurses, surgeons, and all others in the field of medicine are true heroes, doing everything they can to help people get better. Moreover, it’s mind-blowing what can be done to save a life these days. Take for example, surgeons who can replace a heart or a kidney.

With the knowledge experts have today, it’s even possible to change an entire face for people in need. Face transplants have been performed since 2005, when Isabelle Dinoire became the first-ever person to receive one. In 2015, another very special face transplant was performed in the US, when Patrick Hardison became the first American to undergo the procedure.

Like any other loving father, Patrick attended his children’s sporting activities, and liked spending time with his family. The volunteer fireman always endeavored to help his community in any way he could.

One day in 2001, though, the lives of he and his family would change forever.

Patrick was called out to a house fire, where he sustained extensive facial burns to his upper torso, head, and neck. The blaze also claimed his ears, lips, most of his eyelid tissue, and most of his nose.

It seemed as though he was destined to face a life of children running away from him and others parents whispering and pointing. But in 2015, the most extensive face transplant ever performed became a reality.

Patrick had only a 50/50 chance of surviving the procedure, such was its complexity. Today, he has an entirely new face – and looks nothing short of incredible. Here’s all you need to know about the mind-blowing story of Patrick Hardison.

Patrick Hardison from Mississippi worked as a volunteer firefighter earlier on in his life. In 2001, he responded to a house fire when a horrible accident occurred.

Disfiguring injuries in a house fire

Hardison was inside a burning home when it collapsed on top of him.

“[My mask] was melting to my face,” Hardison said. “My hose [was] already melted.”

He managed to escape through a window, but his head and upper body were already on fire, and Patrick suffered horrific injuries.

“For somebody who does what we do for a living, I’ve never seen anybody burned that bad that was still alive,” friend and first responder Jimmy Neal recalled of seeing Hardison after the accident.

The father had third-degree burns on his entire face and scalp. In addition, he sustained facial burns to his head, neck, and upper torso. The fire also claimed his ears, lips, most of his nose, and even most of his eyelid tissue.

“I didn’t actually see myself until probably November. I got injured in September,” Hardison told Fox News. “They had cut a little pinhole in one of my eyelids because they had everything covered, skin graft. I looked in the mirror and all I could do, I said, ‘this is it? I can’t do this,'” he recalled.

A new life awaited Hardison. He underwent 71 surgeries and several other procedures, but he was still unable to form normal facial expressions. Patrick couldn’t eat or laugh without feeling pain, and he couldn’t even blink or close his eyes.

Surgeons were eventually able to put together flaps of skin to protect his vision. Still, he remained at risk of slowly but surely going blind.

As the years went by, Patrick had difficulties accepting his appearance. Just being with his children – or by himself, for that matter – became a nightmare. People pointed at him, and the children were scared.

Patrick always wore a baseball cap and sunglasses, as well as specially designed prosthetics that replaced his ears.

“I had kids. It was just a tough time. I never got a day off from the injury. When you walk out in public, it was daily. And, you know, it’s just so — there’s no way to explain everything,” he said.

“You go to the ball field, you have to prepare yourself for the kid that goes running off screaming.”

For years, Patrick battled pain and staring from people when walking down the street. He was losing all hope of living an ordinary life, and started to think that his disfigured appearance was one he would be cursed with forever.

But as time went by, surgeons developed new methods for face transplants. Finally, in 2005, Isabelle Dinoire became the first-ever person to have a face transplant. Hardison, though, had given up hope of getting the help he desperately wanted.

Then, one day, a friend stumbled across Dr. Eduardo D. Rodriguez, who worked at the NYU Langone Medical Center in New York. Rodriquez had performed a face transplant before, and so the search began to find Patrick a donor.

After a year, Hardison’s search had turned up just two potential donors. The first one was a good match – but the tissue profile was not.

The second candidate looked very promising. However, the man’s family withdrew him from consideration.

Hardison was preparing to accept that he might never get a face transplant. Then, out of the blue, another potential donor came to light. LiveOnNY, a nonprofit that coordinates organ donations in the New York area, had found a match. The face belonged to David Rodebaugh a 26-year-old who had sustained a massive head injury in a bike accident and had been declared brain dead.

After David passed away, his mother, Nancy Millar, decided to donate her son’s organs, including liver, heart, and kidneys. More important, she decided to also donate his face.

“I said, ‘You better save his face. He has the face of a porcelain doll.’ And he’s a donor — we had talked about it,” Millar told People.

She didn’t hesitate for a second when she heard about Patrick and the possibility of him getting a face transplant. For her, it was a chance for David to live on.

“When I met Patrick, I saw this strength, this strong, manly, burly kind of energy in him — that David had,” she recalled.

“David wanted to be a firefighter, an I knew if this guy was a firefighter — he was willing to walk into a fire to save people and risk his own life — then he had the strength that David had.”

Dr. Eduardo D. Rodriguez assembled his team of 100 doctors, nurses, and other medical aides, and together they prepared for Hardison’s surgery. It was the most extensive soft tissue face transplant ever performed – the surgery took a whopping 26 hours.

50/50 chance of surviving the surgery

The medical team gave Hardison a new face, scalp, ears, and ear canals. They selected portions of bone from the chin, cheeks, and the entire nose. Not only that, but Patrick also received new eyelids, returning to him the ability to blink naturally.

But the surgery was not without risk. Due of the nature of the highly complex procedure, Patrick only had a 50/50 chance of surviving.

“Everything in life has a risk,” Hardison told Time Magazine.

“When it’s your time to go, you’ll go—whether you’re walking down the street and get hit by a car or you’re lying on the operating table.”

Prior to the surgery, Patrick met his family for what could’ve been the last time.

His eldest daughter Alison wondered why her father was so desperate to go through with the procedure.

“And that right then pretty much sealed the deal for me.”

Fortunately, the procedure was a big success, though it was only the start of a very long journey for Patrick. During the first week following the operation, he endured late night scares involving fluctuations in blood pressure and an unstable airway.

The new face also meant that he had to learn how to speak and swallow again, and he suffered from both anxiety and had bouts of frustration because of it. He couldn’t even close his mouth because his face was so swollen.

“They have given me a new life”

Despite all that, the surgery was life-changing. Not only did Patrick experience the joy of seeing his family again, but he also got to meet David Rodebaugh’s mother, Nancy Millar. Their first encounter after the surgery was an emotional one, and it turned out Nancy had one request.

“I said, ‘Can I kiss your forehead?'” Millar said. “That’s the one thing I wanted to do because every night before David went to bed when he was little, I kissed his forehead.”

“I’ve been waiting a year to meet her. I’m just very grateful,” Patrick said. “Without her, it wouldn’t have been possible. It’s like she’s family. We connected that easily.”

It’s now been seven years since Patrick underwent his face transplant. Since then, his life has changed plenty – he and Chrissi divorced a year after the surgery, following ten years of marriage.

Hardison’s face healed nicely, and the swelling has gone down. Though he has to take anti-rejection drugs for the rest of his life to stop his body’s immune system from fighting the inserted transplant, it has given him the chance to live again.

“I am deeply grateful to my donor and his family,” Hardison said in a statement.

“Even though I did not know who they would be, I prayed for them every day, knowing the difficult decision they would have to make in order to help me. “

Today, the father-of-five wants to use his journey and recovery to spread the message that it’s never too late to give up. Patrick stands for hope, and he desires to help others struggling with debilitating injuries.

“I’ve bought my own place, working on getting a house built. I’m working on a book,” Hardison told Fox in 2021.

“Because I want to show the world that you can have hope. I wouldn’t want people that were like me years ago to think that’s it, I have to live like this. You don’t. You can accomplish anything.”

Patrick Hardison’s recovery is a miracle, and we are incredibly inspired by surgeon Dr. Eduardo D. Rodriguez and his team. You are the real heroes!

Please, share this article on Facebook with friends and family to honor the work of the medical staff that helped Patrick get his life back.