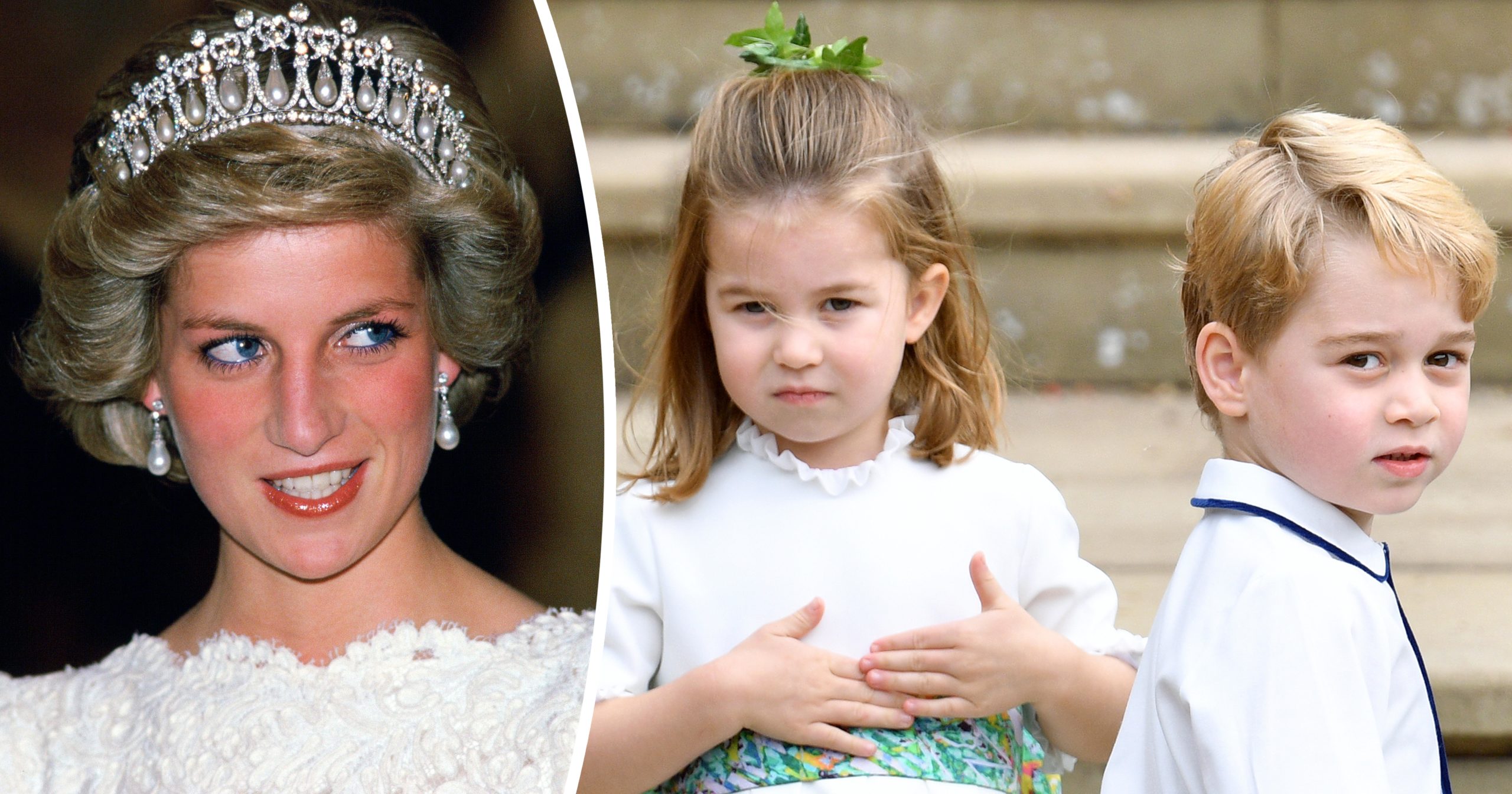 The entire world was left in grief when Princess Diana passed away in 1987 following a tragic car accident. Her sons, Prince William and Prince Harry, were left without their mother; a country was left without its favourite princess.

Ever since the accident, William and Harry have endeavored to honor their mother in the best ways possible. Today, the brothers have children on their own, and even though Diana isn’t alive, the next generation of royal kids are also doing their bit to remember her.

It even turns out that William and Harry’s children have their own names for their grandmother Diana – quite a few, as it happens.

Princess Diana was loved by many. She became a part of the Royal Family in 1981 when she married Prince Charles. The couple tied the knot in St Paul’s Cathedral in London, and royal faces from several countries were in attendance.

Diana tragically passed away in August of 1997 following a car accident in Paris, France. For large parts of her royal life, she was followed around everywhere by the paparazzi press.

Everybody wanted a piece of the Princess, and according to The Guardian, the paparazzi press were offering up to half a million dollars for even the grainiest pictures of her.

Her sons, William and Harry, saw both sides of how the press treated their mother. And that was actually why Harry wanted to leave the Royal Family in his early 20s, owing largely to how he witnessed his mother treated before her death.

Besides leading an extremely public life, Princess Diana also had many personal problems. One of the biggest involved her husband, Prince Charles.

Just years after tying the knot with Diana, Charles engaged in an affair with Camilla, who would later become his new wife.

“We felt incredibly loved by her”

Over the years, William and Harry have been two very loving brothers, bonded together through tragedy. Losing a mom at such young age is truly something no one could even understand. But something positive for William and Harry was that, at least, they had each other.

In 2017, on the 20th anniversary of Diana’s passing, the two brothers got together and talked about their mother.

“When everybody says ‘she was funny, give us an example’. All I can hear is her laugh,” Harry explained.

“We felt incredibly loved by her, and I’m very grateful that the love still feels there,” William added.” It feels like a good time to remember her and hopefully provide a different side.”

” It was that love, even though she was on the other side of the room, as her son you could feel it,” Harry said.

Being royalty will always mean that one’s childhood is very different to that of “average” people. But Diana always wanted her sons to feel as normal as possible, which became apparent when some old letters of her were discovered.

Diana’s letters about William and Harry

One specific letter from Diana was written in March of 1985, just six months after the birth of her youngest son, Harry.

The letter, written by Diana to a former steward at Buckingham Palace, Cyril Dickman, was sold at auction in Cambridge in 2017.

Princess Diana revealed how a then-older Prince Harry was “constantly in trouble” at school in other letters. Moreover, she wrote about the joy of being a mother, and described the “difficult period” in her life that was to follow.

Princess Diana often took William and Harry to theme parks and other fun venues. She knew the importance of treating William and Harry just like any other child, even though they were royals. With this in mind, she would sneak them out of the palace from time to time to go and get fast food.

“I remember the princess came into the kitchen one day and said, ‘Cancel lunch for the boys, I’m taking them out, we’re going to McDonald’s,” Diana’s former personal chef, Darren McGrady, told Marie Claire.

Harry and William revealed a statue of their mother

Royal historian Robert Lacey further revealed new details about Harry and William’s childhood, and how their mother wanted the two brothers to make her a significant promise. Lacey quotes psychic Simone Simmons, who used to consult Diana, in his book.

“You must promise me that you will always be each other’s best friends,” Simmons claimed Diana told her sons. “And never let anyone come between you.”

“Both boys promised they would keep to that,” Simmons recalled. “They high-fived each other and gave their mother a big cuddle.

“‘Anybody would have melted at the sight,’ she said. “Then they went out to play soccer.”

Last summer, William and Harry reunited as a statue of Diana was revealed in the Sunken Garden of London’s Kensington Palace, on what would have been Diana’s 60th birthday.

“Today, on what would have been our Mother’s 60th birthday, we remember her love, strength, and character – qualities that made her a force for good around the world, changing countless lives for the better,” Harry and William said in a joint statement.

Nicknames within the Royal family

“Every day, we wish she were still with us, and our hope is that this statue will be seen forever as a symbol of her life and her legacy.”

One might think that the Royal Family are bound to always be extremely polite, strict, and formal, even behind closed doors. However, it turns out that, just like any other family, they have nicknames for each other.

Prince William reportedly called The Queen “Gary” when he was younger, since he could not pronounce ‘Granny.’ Prince Philip, meanwhile, was said to have called Queen Elizabeth “Cabbage” and “Sausage,” according to The Mirror.

OK! Magazine revealed the unique nickname Prince Harry has for Catherine “Kate” Middleton, the wife of his brother William.

According to the news outlet, Harry usually calls Kate Middleton “Cath.” However, his sister-in-law has been known as “Kate” to the rest of the world since deciding to go by that moniker during her time at university.

In 2017, William and Kate spoke on BBC Radio 1 about nicknames. The radio host had heard that Harry referred to the couple as “William and Cath.”

And it turns out that Diana, the Queen, and Kate Middleton aren’t the only ones who have nicknames. William and Kate’s children have some of their own at school.

Prince George stands third in the line of succession after his father and grandfather, Prince Charles. On July 22, 2013, when he was born, there was huge media interest in the little prince, and his birth was celebrated worldwide.

On May 2, 2015, he became a big brother when his sister, Princess Charlotte, was born. George started school at the Westacre Montessori School in Norfolk in early January of 2016, before transferring to Thomas’s Battersea School in September 2017, the institution he and his sister Charlotte now attend.

According to its website, the fee for Prince George and Princess Charlotte for the upcoming school year at Thomas’s Battersea School is around $20,000.

William and Kate’s three children – George, Charlotte, and their youngest son Louis – all have official titles of Princes and Princess, meaning that while on official royal duties with their parents, they will always be referred to by their royal titles.

This is what the royal children are calling their grandmother, Diana

However, at school, the same rule doesn’t apply, apparently. According to Hello Magazine, George and Charlotte aren’t referred to by their royal titles.

Instead, they go by George Cambridge and Charlotte Cambridge. It’s a nod to their parents’ titles, with William and Kate Middleton being the Duke and Duchess of Cambridge. It’s been reported that his classmates call Prince George “PG”.

Of course, this isn’t the first time royal children have taken on nicknames. Both William and Harry had nicknames of their own while in school and later while serving in the military, being referred to as William Wales and Harry Wales. Their father, Charles, is the Prince of Wales. Their mother, Diana, was the Princess of Wales.

Now, though Diana has passed away, William and Harry, alongside their Kate Middleton and Meghan Markle, are doing their best to honor her legacy. Most importantly, they make a big deal of telling their children tales and stories about their late grandmother.

As it happens William and Harry’s children have their own names for their grandmother.

“Each year on Mother’s Day, George, Charlotte and Louis make cards remembering their Granny, Diana, for William,” William and Kate wrote on Twitter, alongside three adorable homemade cards created by the youngsters.

Both George and Charlotte referred to their late grandmother as “Granny Diana.” In their cards, they wrote that they loved her very much and that “papa is missing you.”

Harry’s son, meanwhile, doesn’t refer to Diana as “Granny.” Instead, Archie refers to his grandmother as “Grandma Diana.”

In fact, in his AppleTV+ documentary series, The Me You Can’t See, Harry revealed that one of Archie’s first words was “grandma.”

“I’ve got a photo of her in his nursery,” he said. “And it was one of the first words that he said. Apart from ‘mama,’ ‘papa,’ it was then ‘grandma’. Grandma Diana.”

“She’s watching over us”

Speaking to Today, Harry revealed that he often talks with Archie about his own mother.

“Yes, very much so. I don’t tell him all the stuff that’s happened, but certainly that this is Grandma Diana, and we’ve got a couple of photos up in the house,” Harry said, adding that he constantly feels her presence.

“It has been over the last two years more so than ever before,” he said. “It is almost as though she’s done her bit with my brother and now she’s very much like helping me. She got him set up and now she’s helping me set up. That’s what it feels like. He’s got his kids, I’ve got my kids.”

“She’s watching over us,” he added.

It’s important to remember and honor family history. And in the case of William and Harry, it’s wonderful to see how their children are getting to know what an amazing person their grandmother, Diana, was, even though they never will get the chance to meet her.