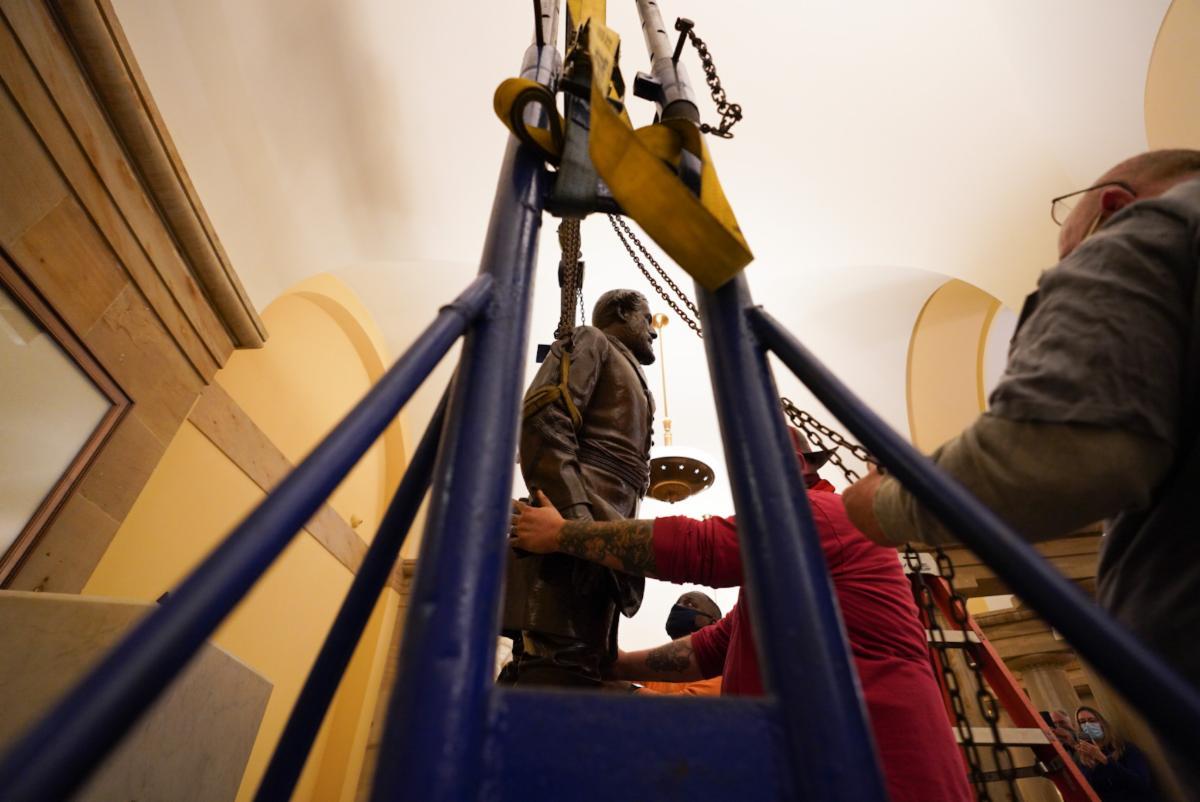 It has stood alongside America’s first president for over 100 years but now the statue of Confederate General Robert E. Lee has been removed from the U.S capitol overnight.

Virginia Governor Ralph Northam announced Monday that the Commonwealth’s statue had been removed from the hall after it had stood alongside George Washington since 1909.

“Last night, Virginia removed its statue of Robert E. Lee from the U.S. Capitol,” Northam wrote on Twitter. “This is an important step forward.”

While the commander of the confederate states army is celebrated by many as “an exceptional officer and military engineer in the United States Army for 32 years,” he came to symbolize “Virginia’s racist and divisive history.”

Northam said: “It is past time we tell our story with images of perseverance, diversity, and inclusion.”

More than 90 years ago the American historian, civil rights activist, and author W.E.B. Du Bois wrote that Lee had fought hard to defend slavery in the South.

“Robert E. Lee led a bloody war to perpetuate slavery.” He then writes in his book “The Crisis”, some media outlets would disagree claiming he fought for states’ rights.

To this Bois says: “Nonsense. The South cared only for State Rights as a weapon to defend slavery. If nationalism had been a stronger defense of the slave system than particularism, the South would have been as nationalistic in 1861 as it had been in 1812.”

Lee’s statue will be replaced with a statue of Barbara Rose Johns who at just 16 years old led a walkout at her high school in 1951 to protest poor and unequal conditions. Many historians credit this moment as the one that helped launch the desegregation movement in the U.S. She died in 1991.

“I look forward to seeing a trailblazing young woman of color represent Virginia in the U.S. Capitol, where visitors will learn about Barbara Johns’ contributions to America and be empowered to create positive change in their communities just like she did,” Northam said in a release.

‘How brave she was at such a young age’

Virginia Delegate Jeion Ward said his state would no longer honor the Confederacy.

“When I think of Barbara Johns, I am reminded of how brave she was at such a young age,” she added.

“It’s time for us to start singing the songs of some of the Virginians who have done great things that have gone unnoticed. This is a proud moment for our Commonwealth, and I am humbled to have been a part of it.”

It’s time we stop glamorizing these historical figures and be honest about the legacy that they left behind.

We’d love to hear your thoughts on the removal of this statue. Please leave your views on our Facebook page and don’t forget to share this story.