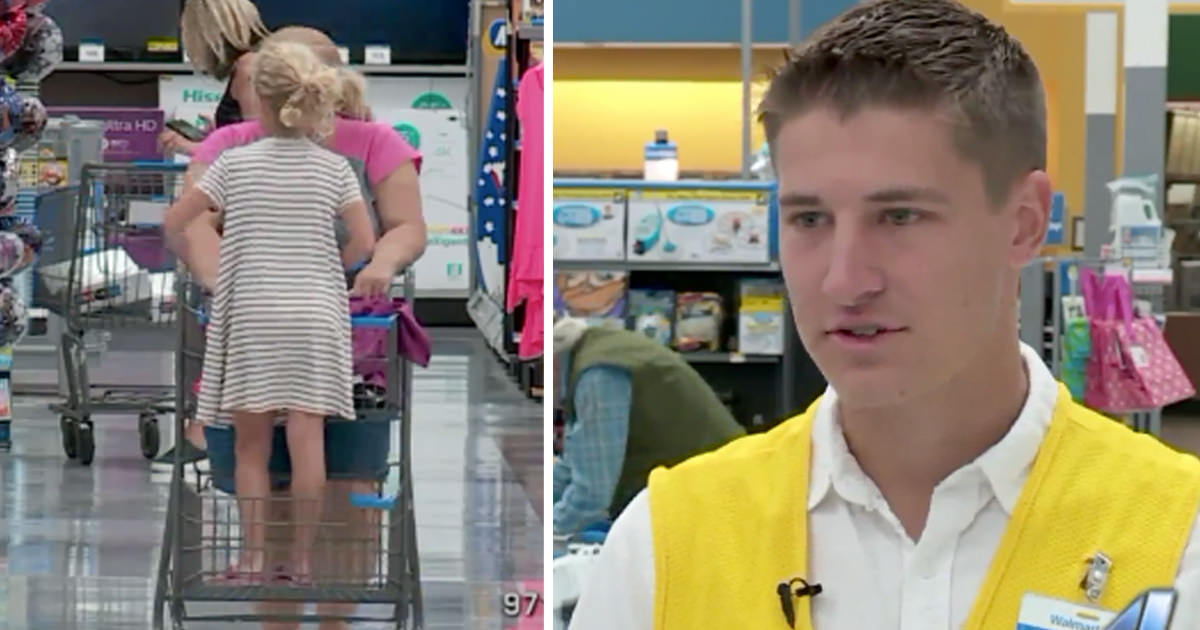 Nick Tate works as a cashier at Walmart in Newcastle, Oklahoma. He is used to helping all different types of customers, and actually holds a reputation of being one of the nicest guys on the staff team.

He often asks his customers how their day has been, and has nothing against talking to them for a little while before they continue their shopping.

Recently, on one busy Friday when the store was full of people, he met a woman with three young children. The woman seemed stressed and her children were tired and teasing each other.

She could feel strangers staring and judging. But the second she found herself standing in front of Nick, he simply looked at her and said, “One of those days?”

Then he decided to do something drastic to help the woman out.

It turned out that the woman was a mother of two little girls and one baby boy. The girls teased each other constantly in the store and were getting out-of-control as the mom struggled to keep them in line.

When Nick met her eyes she immediately apologized, as if she had done something wrong. But Nick wasn’t angry with her.

“One of those days?”, he asked instead.

When the mom reached for her wallet, the next problem arose.

She pulled out a WIC card, those intended to provide assistance for low-income families with children.

The woman explained she was fostering a baby and had to use WIC, part of a federal program that provides assistance for low-income families with children, to pay for some of the items.

She had set up WIC earlier that day, but had never used it before. “I don’t know how it’s going to go.”

For whatever reason, the card didn’t want to work on that particular day, and the last thing she wanted to do was hold up the line any longer.

They tried repeatedly, but the discounts would simply not register. All the while the queue behind the mother grew longer and longer.

Nick realized he had to do something. In an instant, he made a decision that surprised both the mother and the other customers in the store.

He picked up his private credit card and paid for $60 worth of her groceries — he says it was worth every penny.

“I already had my card out at that point. I felt like God was telling me to pay for it,” Tate explained.

“The second it didn’t work I swiped my card.”

The woman broke down in tears in the store. Once she was able to process it, she took to Facebook to share the story with the world.

She never saw Tate’s name tag and regretted not being able to personally thank him. So, she turned to social media to share the heartwarming story in the hopes of finding him.

Before long hundreds of people had shared the message and eventually the foster mom and Tate were able to find each other.

Tate said he never expected their story to go viral, but he’s glad it did.

“It made my heart really happy,” Tate told CBS.

“It confirmed that I’m doing what God wants me to do.”

Watch the video below to see why Nick will never forget this grateful customer:

What an awesome boy, you’ll make a wonderful husband and dad someday. Blessings to his mom and dad for raising a child with compassion and God in his life ?

I hope Walmart give him a reward or a promotion ??