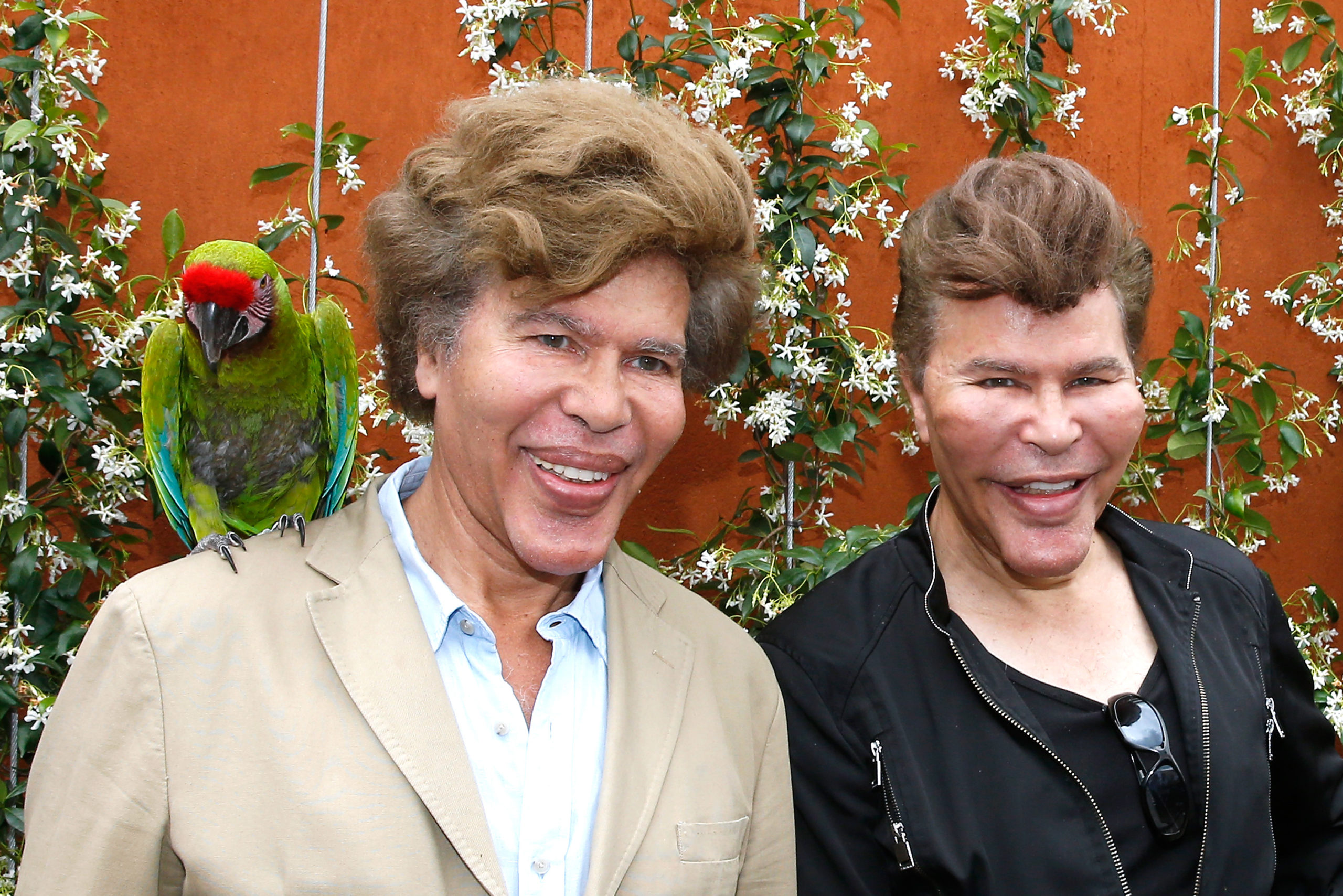 If you’ve browsed the internet in recent years, you might have seen their distinctive faces pop up here and there. But few people know what their names are or what they’re actually famous for.

So let’s once and for all tell the remarkable story behind Igor and Grichka Bogdanoff, the identical twin brothers who’ve attracted worldwide attention for their unusual appearances ...

Some people suggest they are a modern-day incarnation of a tragic saga from ancient Greece – men obsessed with their appearance who plead to the gods to be more beautiful, only to be tricked and made more attractive to themselves but less beautiful to those around them.

The truth is that twins Igor and Grichka Bogdanoff were born as entirely normal boys and initially looked like most people do.

Forty years ago, they started to gain fame in Europe when they became the heartthrobs of French television, excelling with their own primetime series about science fiction. But in recent years, the twins – now 72 years old – have become infamous, and are discussed for entirely different reasons.

Grew up in a castle

Igor and Grichka Bogdanoff were born on August 26, 1949, in the southwestern part of France. According to Wikipedia, Igor is the elder brother – he was born 40 minutes before Grichka.

As you can probably surmise from the name, the twins have Russian roots. Their father was a famous Russian painter and their mother was from the noble Kolowrat-Krakowsky family, a historic Czech family from Central Europe.

It’s a little unclear as to why, but the twins were raised by their maternal grandmother, Countess Bertha Kolowrat-Krakowská. She resided in the castle Saint-Lary (Esclignac) and had lived a very dramatic life, which probably left an impression on the twin boys.

The maternal grandmother belonged to a very noble family, and in 1909 she married Hieronymus Graf – a member of the Austrian princely House of Colloredo-Mannsfeld. Hieronymus was 20 years her senior and their marriage was far from perfect.

In 1925, Bertha Kolowrat-Krakowskáhad had an affair with the African-American tenor Roland Hayes and she became pregnant. Of course, this was a massive scandal, and Bertha was cast out and excluded from the more exclusive circles in Europe. She retired to the castle in Saint-Lary and gave birth to her and Hayes’ daughter, Igor and Grichka’s mother.

It’s probably no exaggeration to say that the twins’ upbringing, in an old castle surrounded by housekeepers, workers, and their grandmother, was quite unique. They learned to speak German, French, Russian, and English – just like their grandma Bertha.

At a young age, Igor and Grichka excelled. They became very interested in astrology and read many books on the subject – something that would later shape their careers. Both also completed degrees in applied mathematics.In The New York Times, they were described as ”wunderkids” with high intelligence and big egos.

Igor and Grichka’s good looks and charisma made a strong impression on viewers in the 1970s and 1980s. The famous, enigmatic TV personalities often appeared in the spotlight, but the twins looked very different during their first screen appearances compared with how they do today.

In the 1990s, things started to change, and people would soon talk about the twins for very different reasons. According to Daily Mail, Igor and Grichkathey had their first round of plastic surgery during the ’90s. After that, it seems like their obsession with cosmetic surgery really took off.

It was mainly the twins’ prominent cheekbones and chins that became the subject of press curiosity – many suggested they were transforming into something other-worldly. People even described the twins as the male answer to socialite Jocelyn Wildenstein, also known as ”Catwoman.”

Although Igor and Grichka no longer had their television show, they often appeared on the red carpet at the Cannes Film Festival. Unfortunately, reviews of their appearances in some newspapers were far from flattering.

For example, the Sydney Morning Herald described the twins’ cheekbones as “so high and bulbous as to appear to threaten their owners’ vision” and the same paper also wrote that the “growth in their lips and chins continued unabated through the last decade”.

The Bogdanoff twins, however, have always denied having any plastic surgery. Though people are convinced that they have used implants, botox, and fillers to stretch their faces, the twins have always claimed that’s not true.

”I say it solemnly, we have never used it,” Grichka Bogdanoff said in an interview with Télé-Loisirs 2017.

There are a few different theories about the twins’ peculiar appearances. According to a report in the French press, their blown-up features could be due to a hormone often associated with gigantism.

When questioned on the whole subject again in 2017, Grichka Bogdanoff answered journalist Laurent Argelier and said:

“We have never resorted to what is called cosmetic surgery,” he said.

However, he recognized that he had used some ”protocols” to have such peculiar facial features. “They are advanced technologies,” he said, before explaining that he was not authorized to speak more about it.

Once again, they were asked if they had plastic surgery or if they had “implants” put in their faces. According to Igor and Grichka, they had been the subject of strange scientific experiments during a trip to the USA.

“There are simply radiation experiences,”they said.

Even though the brothers received the lowest passing grade of ”honorable,” it seemed like they were at a turning point in their careers.

After embarking on their post-doctoral studies, the brothers got involved in a series of controversies. The most well-known was called ”The Bogdanov affair” and caused quite a stir in the academic world. It revolved around the legitimacy of a series of theoretical physics papers written by the brothers.

Not much is known about the twins’ personal lives and their family. Although they are public figures, very few details about their private lives have been leaked.

It turns out, there’s a reason for that.

Both Grichka and Igor love to maintain a hint of mystery about their private lives, and even refuse to confirm their age.

What we do know is that Igor has six children.

His two youngest children were born after a relationship with Amélie de Bourbon Parme, an author with roots in the Capetian dynasty, one of France’s most famous royal families. Amélie’s father was none other than the famous Prince Michel de Bourbon Parme, a former soldier, secret agent, racing driver, and French businessman.

In an interview with Gala newspaper, Igor proudly declared that his “two youngest children are descended from the kings of France but above all … from a pope (Paul III: 1468-1549)”.

Igor also stated that his four oldest children had left the family home and started their own careers.

As for Grichka, he has not been married and has no children.

Igor and Grichka are still active in the entertainment business. As recently as 2020, the twins participated in the French version of The Masked Singer. The famous brothers hid under parrot costumes and seemed to enjoy the show, which was watched by five million viewers.

Both Igor and Grichka are passionate music lovers and said they loved the idea of ”staging characters that can’t be immediately identified.”

The brothers were eliminated in the final episode of The Masked Singer program but still seemed happy.

”We had fun the whole show. We tried to make real music,” the two brothers commented.

Afterward, there was a lot of fuss made about their salary. French journalist Gilles Verdez challenged the brothers as to how much they earned from participating in the program. According to his information, the brothers were paid $46,000 each for their participation.

Confronted with that sum, a mysterious silence from the twins once again filled the room. Then Grichka opened his mouth.

”That sum, you can divide it by two,” said Grichka.

No matter what you think of their looks and fascinating cheek bones, I have to say that these twins seem to be incredible characters.

Did you know who the Bogdanoff twins were before or did you learn something new today? Don’t forget to share this article with your friends and family, so that more people can discover their fascinating life story.