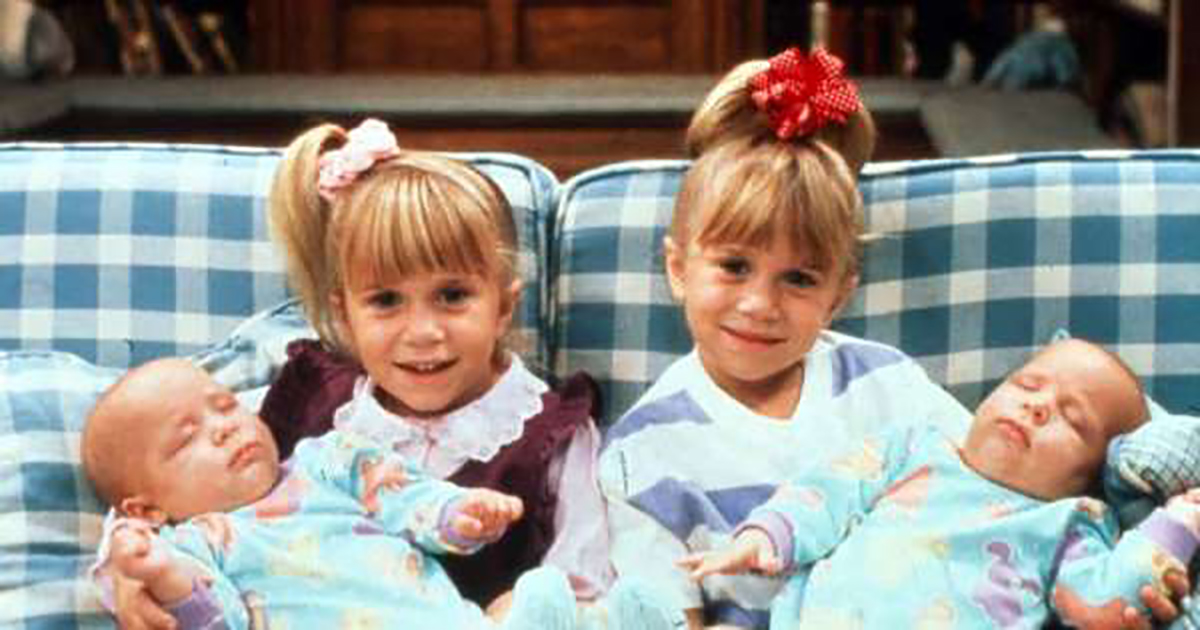 Has there ever been a more iconic pair of twins than Mary-Kate and Ashley Olsen?

I simply can’t come up with a set of twins that can match the Olsen sisters in popularity and superstardom at the height of their fame, nor the impact they had on popular culture.

Their breakthrough came in the television sitcom “Full House”, where the 9 month old girls became famous all over the world. People couldn’t help but fall in love with the cute and charming toddlers.

Of course, a lot of water has flowed under the bridge since then, and the twins are now in the middle of their lives – each pursuing their own careers. However, both are very restrictive on social media, which makes it hard to know what their lives look like today. Safe to say that after 33 years in the public eye, these famous girls have transformed and now look almost unrecognizable…

Mary-Kate and Ashley were born in 1986 in Sherman Oaks, California. Ashley arrived first, followed by her sister two minutes later.

As their last name hints at, their family has its roots in Scandinavia. The Olsen family is of Danish and Norwegian origin.

From the day the twins were born, their parents realized that their girls had something very special – they always laughed and smiled.

Many people still think that the Olsen twins are identical twins, but that’s not true. The Olsen sisters are actually fraternal twins, which means that they could just as easily look nothing alike. They only share half of their genes, just like any other siblings.

When they were just six months old, their mother took them to an audition for “Full House”, the popular American television sitcom which ran between 1987 and 1995. The production team had already decided on another set of twins to play “Michelle Tanner” in the series – but when the producer saw the Olsen twins, he decided to go for them instead.

The audience immediately fell for the twins’ character, Michelle. Her most memorable line of them all, “You got it, dude!” became a classic.

As most people may know today, Mary-Kate and Ashley shared the work of portraying Michelle. Because they were so small at the time, the production had to alternate between the girls, otherwise it would be unendurable for one so young.

But the production team still did everything to hide the fact that it was two girls who were playing Michelle. For example, her character was initially credited as ”Mary-Kate Ashley Olsen”.

The twins became so popular that the writers behind ”Full House” began writing special storylines just for Michelle. Mary-Kate and Ashley ended up staying on the show until it concluded in 1995.

Privately, Mary-Kate & Ashley was said to be very shy in school and they were even placed into separate classrooms because they depended on one too much, according to certain teachers.

In retrospect, Mary-Kate Olsen has talked openly about her upbringing as a child actress, and how she regrets that she was in “Full House”.

She said that she and her sister were like ”little monkey performers” in front of the cameras:

”I look at old photos of me, and I don’t feel connected to them at all … I would never wish my upbringing on anyone,” Mary-Kate explained in an interview with the magazine Marie Claire.

”Full House” was not the only thing that ended in 1995. The same year, Mary-Kate and Ashley’s parents divorced. The twins were left heartbroken and it was a difficult a time for the whole family.

But the show had to go on and the sisters started to focus on new projects and movies. They worked harder than any children should have to do at that age.

As 6-year-olds, they founded and became CEOs of their own production company, Dualstar. Even today, 30 years later, the twins are still CEOs of that same company.

In the following years, they shot almost 30 movies, most of them being straight-to-VHS films. Mary-Kate and Ashley also recorded music albums, music videos and released a book series. Before they turned 10, Mary-Kate and Ashley were the youngest millionaires in the United States to make their own money.

2004 was a sad year for all fans who appreciated Mary-Kate and Ashley’s movies. Back then, the twins decided to release their last film, ”New York Minute”. Sadly, critics didn’t like the movie at all and the sisters announced that they were leaving Hollywood to focus on their careers as fashion designers and establish their own identities.

“We’ve been there, we’ve done that, we started out that way,” Mary-Kate told British Vogue.

“But this is the way we chose to move forward in our lives: to not be in the spotlight, to really have something that speaks for itself.”

In the early 2000s, the twins became increasingly interested in fashion and nowadays run two clothing brands with their own designs, ”Elizabeth and James” and ”The Row”.

Their fabulous clothing has become known around the world.

“If you want things to be perfect or beautiful, it’s a lot of hard work,” Mary-Kate said.

“Nothing comes easy. That’s just the way we were raised; that’s what we believe is necessary to do something different.”

Mary-Kate and Ashley have managed to shape their their own, separate careers – even though they continue to work together from time to time.

People also began to see a clearer difference between the twins – Mary-Kate experimented a lot with her style and became known for her slightly daring, bohemian look. Ashley, meanwhile, dyed her hair darker and it became easier to separate them.

But despite all the millions and all the success, the sisters have also had setbacks in life. In 2008, the whole world was shaken by actor Heath Ledger’s tragic death. It was even harder for Mary-Kate, who is said to have been dating Ledger at the time.

Mary-Kate has also fought against eating disorders and anorexia, something that the tabloids liked to speculate about.

Today, however, Mary-Kate is feeling better, thanks to the help she received after she checked into rehab for six weeks in 2014.

”I think it’s really important to be able to talk when something’s wrong. I learned at a really young age that if you don’t talk about it, it can drive you insane,” she said in 2010.

They tied the knot at a very unique and private ceremony. Overall, Mary-Kate tries to keep her personal life very private. The guests at her wedding were not even allowed to bring their cellphones to the ceremony, for example.

Ashley has focused very much on her own career and hasn’t settled down with a family yet. She has dated many guys over the years and her dating history has caused a lot of headlines – because her past boyfriends were twice her age.

According to reports, she is currently dating 31-year-old artist, Louis Eisner.

The Olsen twins’ little sister, Elizabeth Olsen, has really invested in a career in Hollywood and is embracing the acting lifestyle.

Elizabeth’s major break came in 2011, when she starred in the independent thriller drama ”Martha Marcy May Marlene”. Since that success, Elizabeth has continued to star in many blockbusters and her sisters sometimes show up at her premieres.

According to her, Mary-Kate and Ashley have always been great role models for her.

”It’s always felt as though [Mary-Kate and Ashley] have been women, while I’ve been the kid. But we’re very close and I look up to them a lot. I wasn’t really affected by their fame until I went to college. People would expect me to be partying and all sorts of stuff. It was really strange,” Elizabeth told Daily Telegraph.

As mentioned, the twins want to keep their private life very private and they rarely do interviews.

Rarely seen on the red carpet

And who can blame them? For so much of their lives, the twins have been hunted by photographers, fans and stalkers.

“We’ve spent our whole lives trying to not let people have that accessibility,” Mary-Kate explained in a 2011 interview.

Today, Mary-Kate and Ashley let their clothes, fashion lines and companies speak for themselves – they don’t have to be seen on the red carpet all the time. Sometimes they might show up at fashion galas and events, but there’s not much left of those cute twin sisters who took the ’90s by storm.

They now live their lives in different places and have grown up to be beautiful, independent women who stand firm for themselves.

But they will always have a special bond, like all twins.

I think it’s amazing to see what a journey the Olsen twins have made in life – all respect to them!

It’s never easy to be known all over the world – especially if you’re just a toddler. But I think Mary-Kate and Ashley have handled their lives in a very good way and I wish them all the best in the future!