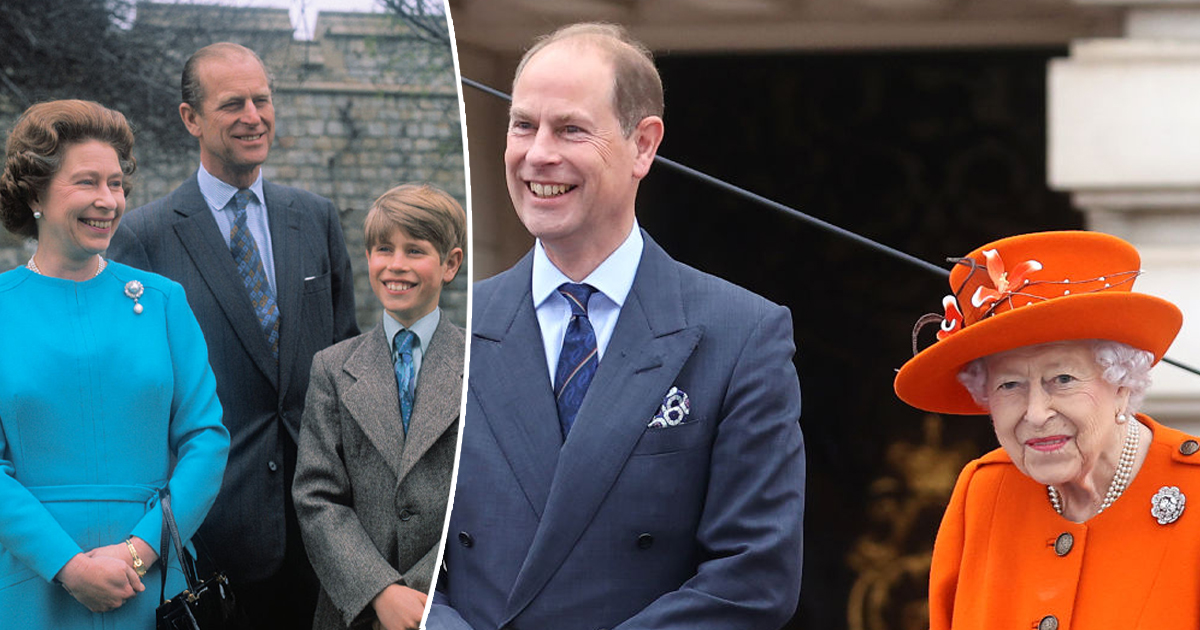 The death of her majesty the Queen of England has left people all over the world mourning. But understandably most devastated is her family.

The Queen leaves behind four children. And while mothers always claim to have no favorites, the Queen always did seem to have a soft spot for one of her kids…

The Queen had four children with her husband Prince Philip. Her firstborn, who is now King, was Charles, followed by Princess Anne, Prince Andrew, and finally Prince Edward.

The Queen’s last born child Edward was born at 8:20 p.m. on March 10, 1964. He happened to be the lightest baby in terms of weight born to the Queen at 5lbs 7oz. This was the first birth of his own child that Prince Philip attended himself, which made the occasion all the more historical.

Queen Elizabeth was 37 years old at the time of Prince Edward’s birth, and she had requested Prince Philip to be present. The Duke of Edinburgh had complied with his wife’s request and had even held her hand when she was in the delivery room, giving birth.

It was during her fourth pregnancy that the Queen had read magazines that suggested the importance of a father’s involvement in his children’s lives and birth. She was intrigued by the idea and decided to implement it in her life with the birth of her next and last child. This made history as well because in the past royal births were not attended by fathers.

With the birth of her first three children, the monarch had a hard time trying to juggle work and being a mother. And as much as she may have wanted to be present for her children, she would often have to leave them to the care of nannies as she attended to her royal duties.

But with the birth of Edward, the Earl of Wessex when she was already over a decade into being the Queen, things changed. She was more expertly able to navigate through her commitments as the Queen and her job as a mother, and hence had more time to be the latter.

Prince Edward’s childhood was also much more exciting than that of his older siblings. The young prince once even had the opportunity to meet Neil Armstrong, the first man on the moon, after which he was inspired and said he wanted to follow suit with a career as an astronaut too!

After the young prince completed his school from Gordonstoun School, he took a gap year. In the gap year, he began working as a junior master and tutor at Wanganui Collegiate School in New Zealand. Later he went to Jesus College, where he graduated with a second lower class in 1986.

For a while, Edward decided to join the royal marines but left the year-long introductory course just halfway through. He was not a fan of the grueling physical training it took.

Instead the young prince took a completely different direction in terms of his career and pursued a career in theatre. Doing so, he became the first person in the royal family to embark on a career in entertainment. He founded Ardent Productions in 1993, but the company was unsuccessful so the prince returned to his royal duties full-time.

Prince Edward met Sophie Rhys-Jones in 1987 at Capital Radio. At the time the prince was dating her friend, and hence the two had never even imagined dating one another.

But in 1993, they met again at a charity event and that is when sparks flew. The pair began dating and the prince made things official by bring Sophie as his plus-one to important official events.

After witnessing the failing marriages of his older siblings; Charles to Princess Diana, Andrew to Sarah Ferguson, and Anne to Mark Phillips. Prince Edward was more mindful of his decision to marry. He deliberated for a while, and finally in 1999 had made up his mind.

The prince announced his engagement in January 1999 to Sophie. He proposed to her with a stunning Asprey and Garrard white gold ring that featured a two-carat oval diamond with two heart-shaped gemstones on either side.

They married in the summer of the same year in a small ceremony that had no military involvement. On the occasion of their wedding, the Queen presented Sophie with a tiara that was made from pieces in her jewel collection.

After he was married, the prince qualified for the title of Duke, which according to the British system of peerage is the highest rank. However, he refused the title, choosing to be an earl instead.

During their marriage of over two decades, the couple has welcomed two children. Their daughter Louise Alice Elizabeth Mary Mountbatten-Windsor and James Alexander Philip Theo Mountbatten-Windsor, both were born at the Frimley Park Hospital in Surrey.

Sophie, the Countess of Wessex, was closest to the Queen. After the Duke of Edinburgh passed, she made sure to check in on her mother-in-law every other day and make sure she was doing well.

Royal commentator Duncan Larcombe said, “Sophie Wessex has emerged as the Queen’s unlikely ‘rock’ as the monarch adjusts to life without Prince Philip. Prince Edward’s wife has — according to sources — made it her personal mission to ensure Her Majesty is fully supported by the family.”

Edward and Sophie also live near Buckingham palace and would often drop by to see the Queen.

Earlier on the day of her passing, Sophie and Edward arrived at Balmoral Castle where the Queen was, concerned about her health. Now, as Charles becomes king, it is expected that Edward will also help out with royal duties.

After the Queen’s passing, the Royal Family must be going through quite a tough time. Our hearts go out to everyone grieving the death of the monarch.