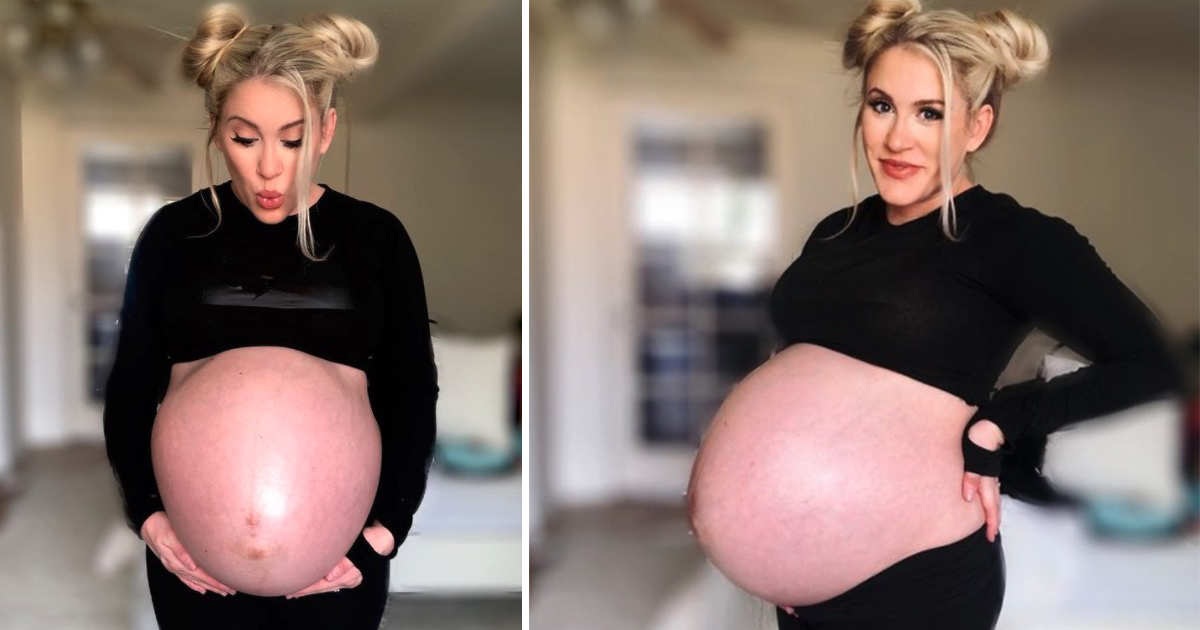 Over the years, I have had the privilege of reporting on many amazing pregnancy stories. I have witnessed miracles and written about triplets and quadruplets – I once even wrote about a mother who gave birth to eight children.

But the story that you’re about to read must take the prize as one of the strangest pregnancy stories I have ever come across.

So hold on to your hats, because the story of this rare triplet pregnancy crosses all boundaries of what I thought was possible…

To become a parent is truly one of life’s biggest blessings. Being able to share all your love with a baby, to see them grow up and explore the world for themselves, is something that’s hard to describe.

Of course, it can be demanding, with little to no sleep and countless hours worrying over their health and safety. But in the end, it really doesn’t matter, because they are our children, and caring for them is part and parcel of the job.

As a first-time mother, there are, of course, thousands of emotions that take over your body before it’s time to give birth. A lot of things can go wrong during the initial weeks of pregnancy – but apparently, miracles can also happen.

To me, the concept of getting pregnant while pregnant sounds unbelievable, somewhat suspicious even. After research, however, I’ve come to realize it’s actually possible. Extremely rare, mind, but it can happen.

In virtually all cases, a woman’s ovaries temporarily stop releasing eggs after she becomes pregnant, making it impossible for her to fall pregnant with another child. Yet there exists a rare phenomenon called superfetation, wherein another egg is released and also fertilized. According to New York Times, there are very few known cases of superfetation reported in the world.

When Charlotte, the mother in this story, became pregnant in the fall of 2020, she’d probably never considered that she could get pregnant during pregnancy. She was too busy buzzing with excitement because she had just received the news that she was expecting twins with her partner.

The happy couple went to the doctor, who explained that Charlotte had two babies in her belly. Yet after another doctor’s visit, a truly incredible picture presented itself on her ultrasound.

”Most emotional day of my life!! Happy, scared, overwhelmed, blessed, shocked….. Once in a lifetime experience”, Charlotte wrote.

Apparently, there was a third child in her womb! She was expecting triplets. 10 days after conceiving her twins, Charlotte ovulated again and conceived a third child!

“Your hormones are supposed to stop you from ovulating [after getting pregnant]. Mine did not,” she explained in a TikTok video about the rare triplet pregnancy.

Suddenly, Charlotte’s pregnancy had become something very unique, and she decided to document her journey on TikTok and Instagram.
At first, she didn’t have a lot of followers, but as her stomach grew bigger and bigger, more people started to follow Charlotte and the triplets’ journey, which she called Taming Triplets.

It was, of course, a shocking and bizarre situation to some extent – but Charlotte tried to stay positive. During her pregnancy, she kept a candid approach and did her best to spread awareness on triplet pregnancies. Charlotte really opened up and shared both the struggles and the happy moments with all her followers.

Right from the the start, she and her fiancé saw the babies as blessings.

”We were just very, very lucky and blessed and thankful and happened to just spontaneously get pregnant with triplets,” she said. ”We wanted to be parents and God went, ‘Watch out what you ask for’ and gave us three at once.”

Carrying triplets is far from risk-free, and Charlotte, just five feet tall, was exposed to additional risks since she is a short woman. The more babies a small woman carries in her womb, the greater the risk of complications.

“Every week I get bigger I think ‘I can’t stretch anymore…’ and then I do!!! Women are warriors. I don’t know how I’m doing this,” she said.

Since Charlotte was carrying three children, there was a chance that not all of them would survive. Even if they did, Charlotte’s own life could be in danger. So doctors ordered her to rest in bed, and asked if the couple had considered genetic testing or reducing the number of babies.

“We want to move forward with all three babies. No genetic testing, no selective reduction,” Charlotte said. “We just pray and hope the babies are going to be healthy… Even if they did have an issue we are going to love them no matter what.”

Interestingly, the babies had different due dates, but because they were close enough to be born the same day, they would all still be considered triplets. Ultimately, their birth was pretty dramatic – doctors were forced to do an emergency C-section well before Charlotte had reached the 32-week pregnancy mark.

Charlotte said that the birth ”didn’t go as calmly as planned” and that ”these little ladies were ready to make their mark on the world and there was no stopping them!”

Rushed to the NICU

The days after the birth of the triplets were turbulent. The little girls fought for their lives in the NICU, while Charlotte had lost a lot of blood during the cesarean section. It transpired that the babies’ lungs hadn’t finished developing, and they couldn’t eat, so the triplets needed a lot of medical help to grow.

”Seeing how much our little girls are fighting hard in the NICU pushes me even harder to be a powerful role model for them and the best I can be,” Charlotte explained.

It was a while before the triplets finally got home from the hospital and could be welcomed by the whole family. But the little girls, named Vivienne, Georgina (Georgie), and Ivy, still have some challenges ahead.

According to Charlotte, both Ivy and Vivienne had muscle Hypertonia, which means they had too much muscle tone in their body, making it hard for them to move normally. On top of that, Ivy caught a fever in the NICU and also needed surgery. It was three weeks before the parents could even hold their precious babies.

Fortunately, everything is now going in the right direction, and these little warriors are making progress all the time. Charlotte is doing a fantastic job as a mother – I’m so impressed with how she stays so optimistic.

It should be added that Charlotte is doing most of the ”mama job” by herself – but has great support from her partner, which is crucial when raising three toddlers. The girls’ dad is not seen very often on Charlotte’s social media accounts, which has raised some questions. In a Tik-Tok video, she finally explained why her partner is so anonymous:

”He is shy and a private person but is the best dad and most supportive partner,” Charlotte said.

Triplet deliveries have become more common in recent years due to in vitro fertilization and other infertility treatments. But as Charlotte has pointed out, her daughters came spontaneously, without medical or herbal help. Multiple births do not run in their families, either, according to Charlotte.

As for now, Charlotte continues to share stories and updates from her and her triplets’ fascinating journey. Don’t forget to follow her on TikTok and Instagram to see how they all are doing!

These cute angels will probably get a lot of attention for a while. I think they deserve it, because they’re a really adorable bunch!

Please share with your loved ones if you agree this story is incredible — and if you want to congratulate the family and wish them continued happiness in the future.