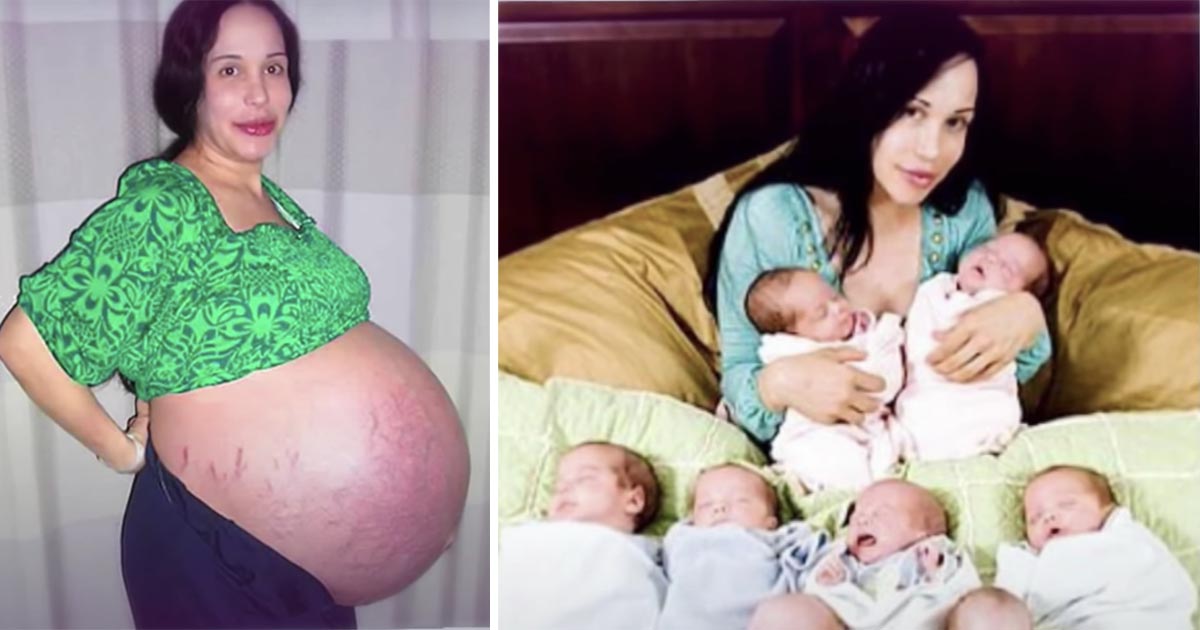 Nadya Suleman became an internet sensation when she gave birth to eight children back in 2009. Known as “Octomom”, she was talked about all over the world, but nothing would stop her from giving her children the best possible upbringing.

Now, her children are growing up fast. And they look adorable!

To become a parent is truly one of life’s biggest blessings. Being able to share all your love with a baby, to see them grow up and explore the world for themselves, is something that’s hard to describe.

Of course, it can be demanding, with little to no sleep and countless of hours worrying over their health and safety. But in the end, it really doesn’t matter, because they are our children.

So imagine the stress of having twins, or maybe three children compared to just having one. That must be pretty tough, right?

Well, in 2009, Nadya Suleman, also known as “Octomom” gave birth to eight(!) babies. Her and her children’s lives quickly turned into an internet sensation, especially in the era of reality TV that we live in.

Eight children at once

These days, her children are growing up and will soon celebrate their 12th birthday. This is Nadya’s incredible story.

Nadya Suleman gave birth to eight babies back in January of 2009. Births of that magnitude are, of course, extremely rare. Not only that, but the birth itself can be extremely dangerous. However, to everyone’s delight, all eight children survived, making them the longest surviving octuplets in the US. Some might even call them miracle babies, because they really are!

Nadya has six more children, but we’ll get to that in a moment.

So who is Nadya really? Well, she was born July 11, 1975 in Fullerton, California, and her childhood wasn’t especially great. She says she was raised by a “chronic alcoholic father”, and that her parents didn’t get along. They lived in separate rooms and only stayed in the relationship because of Nadya.

It was a painful childhood in many ways. She was hyperactive and had ADHD, and at the same time as her father was a heavy drinker, her mother couldn’t give her all the love she wanted.

Nadya married her first husband, Marco Gutierrez, in 1996. She and her husband longed for children, and Nadya wanted a big family. She wanted the feeling of self-respect and identity that she didn’t get in her early years.

“My mom, because of her history, I believe she was unable to express – openly express – love and affection,” she said.

“And I hungered for that. I longed for love. I needed to be touched and held. And to hear the words, ‘I love you’.”

Marco and Nadya couldn’t have children, as a result of which she decided to freeze her embryos. She had worked at a state mental hospital back in 1999, but unfortunately suffered a back injury. Nadya received $165,000 dollars in disability payment, and she spent it on IVF treatments.

She went on to have four sons and two daughters conceived via IVF treatment. She raised her lovely children all on her own, but it wasn’t a walk in the park.

For Nadya, it was hard to provide for her children, and in 2008, she filed for bankruptcy. At the same time, she gained popularity in the media because of her appearances in an adult film and stripper jobs. If that wasn’t enough, Nadya had problems with prescription drugs, which she became addicted to.

“Octomom” was soon became a name anyone who read papers in the US were aware about. But it wasn’t a name she came up with herself.

“I never coined the term Octomom,” she told Inside Edition in 2017.

“I shamefully embraced the character, I have embraced every day with gratitude.”

To help her have her first six children, Nadya Suleman had used fertility doctor Dr. Michael Kamrava. He implanted a dozen embryos, the ones she still had left, but it would later turn out to be a big scandal.

12 embryos was six times the norm for a woman at Nadya’s age, which put her health at risk.

“I’m sorry for what happened. When I look back, I wish I had never done it. It’s a very risky, unhealthy pregnancy. She’s lucky she made it through, both for the babies and her,” he said in a statement during a hearing to determine if he could continue practicing medicine in California.

The doctor said Nadya wouldn’t be OK with any other option, after which he felt legally bound to go ahead with the 12-embryo transfer.

Nadya “Octomom” Suleman was pregnant. At the time she was studying for her master’s degree in counseling. However, this time she wasn’t just going to have twins. She was having eight children. Nadya went into labor in week 31. When the time came, it took 46 doctors and nurses to perform the C-section.

The babies were all premature at birth, but as if by miracle, all of them made it through alive! The babies weighed between 1 pound, 8 ounces and 3 pounds, 4 ounces. Nadya welcomed six boys and two girls.

Word spread fast, especially in the medical world, where no such thing as delivering eight babies – and all being well and alive – had happened before.

“Octomom” has never revealed the true identity of the father, however all came from the same – unidentified – sperm donor.

The children all got biblical names; Noah, Josiah, Jeremiah, Jonah, Isaiah, Makai, Nariyah and Maliyah. Also, all the children have the same middle name, Angel. The babies had their last name changed from Suleman to “Solomon”, though Nadya never confirmed why.

Just a couple of weeks following the babies’ birth, she underwent an interview with Today about her life.

She was a sensation, and cameras followed her around everywhere she went. Reporters and photographers wanted to know all about her, and her face was printed on every big tabloid’s front page.

“All I wanted was children. I wanted to be a mom. That’s all I ever wanted in my life. I love my children,” she said.

Having a combined total of 14 children takes energy, love and plenty of money, with the last being the biggest problem for Nadya as a single mom.

She had to come up with some way of finding money, and she turned to somewhat non-conventional form of work. Nadya gained a lot of attention when it became known – with what she called “self-exploitation” – that she had a brief career in the adult film business with the movie “Octomom Home Alone”. She was actually nominated multiple times in 2013 by the adult magazine AVN, and won a prize for Best Celebrity Sex Tape.

“Octomom” also worked as a stripper for a while in order to make extra money to support her family.

“I was violating repeatedly my own core values and my own boundaries,” she said in an interview on The Doctors in 2016.

“In my mind, it was like an investment so I could support my family. There’s going to be some type of repercussion. For me, that was the manifestation of toxic shame.”

Following her stripper and adult film work, “Octomom” felt that she needed something to numb the emotional pain, since she also only managed three to four hours of sleep each night due to the panic of keeping her kids safe. She started taking Xanax, which turned into an addiction.

In 2012, she checked into a rehab center, and her children were taken care of by two nannies and some of her friends.

“In order to continue that cycle with self-exploitation and dehumanization, I had to emotionally numb [myself] with a mood-altering substance,” she said. “It was poisonous. It was horrible.”

Nadya made it out and fought her way back into the role of being a loving mother. Her children are all eating vegan food, something that she loves to share on her social media channels as well.

In the summer of 2018, Octomom said that she had started working as a councilor with patients who suffer drug and alcohol issues. She still receives assistance from the government, and last year she started writing her own book. It’s finished now, but according to Radar Online, no publisher wants to buy it.

The autobiography tells the story of her not so typical life.

“She has been talking with publishers, but is not nearing a deal,” a source told the site.

“She is holding out because she is not being offered a lucrative deal, and she feels like her personal story is worth a lot more than anyone is even interested in paying.”

Octomom – this is the family today

In January, Octomom’s eight children celebrated their 11th birthday. According to Inside Edition, the family lives in a modest three-bedroom townhouse in Orange County, California.

Through Instagram, Octomom posts many pictures of herself together with her children. They’re oftentimes seen out exercising and spending time with each other.

Nadya also promotes their vegan lifestyle, and has said that her children are allowed to eat unhealthy vegan food once a week.

“I’m sharing just a glimpse of how healthy my kids and I live. 13 out of my 14 kids are vegan,” Nadya wrote on Instagram.

“I allow my children (and myself) to enjoy some vegan “junk” once per week at the most. This way they do not feel deprived, and learn the value of self-discipline. We eat whole, plant based foods with nearly no added ingredients (other than spices).”

Her miracle babies are now all grown up. At first, the odds that all of them would survive were low, but now they’re enjoying life together in their huge family. The children all go to school, and Nadya makes sure to share her love for them so that no one feels missed out.

On January 27, earlier this year, Octomom shared a beautiful picture of her octuplets celebrating their birthday.

“Happy birthday to my beautiful angels. You are some of the kindest, most compassionate, caring human beings I’ve ever known,” she wrote.

“Words cannot express how grateful I am to be your mother. You all have blessed my life immensely and I thank God daily for trusting me to care for, shape the lives of, and influence all of you. Recent tragic events of loved ones lost are a powerful reminder of how fragile, precarious, yet precious life is, as tomorrow is never promised. We need to hug our loved ones a little longer and a little tighter while they are here. You are my miracles, my angels, and I will love you with all my heart, forever. Happy 11th birthday Noah, Maliyah, Nariyah, Isaiah, Jeremiah, Jonah, Josiah, and Makai.”

We are so happy that all the children are safe and well – they sure grow up so fast!