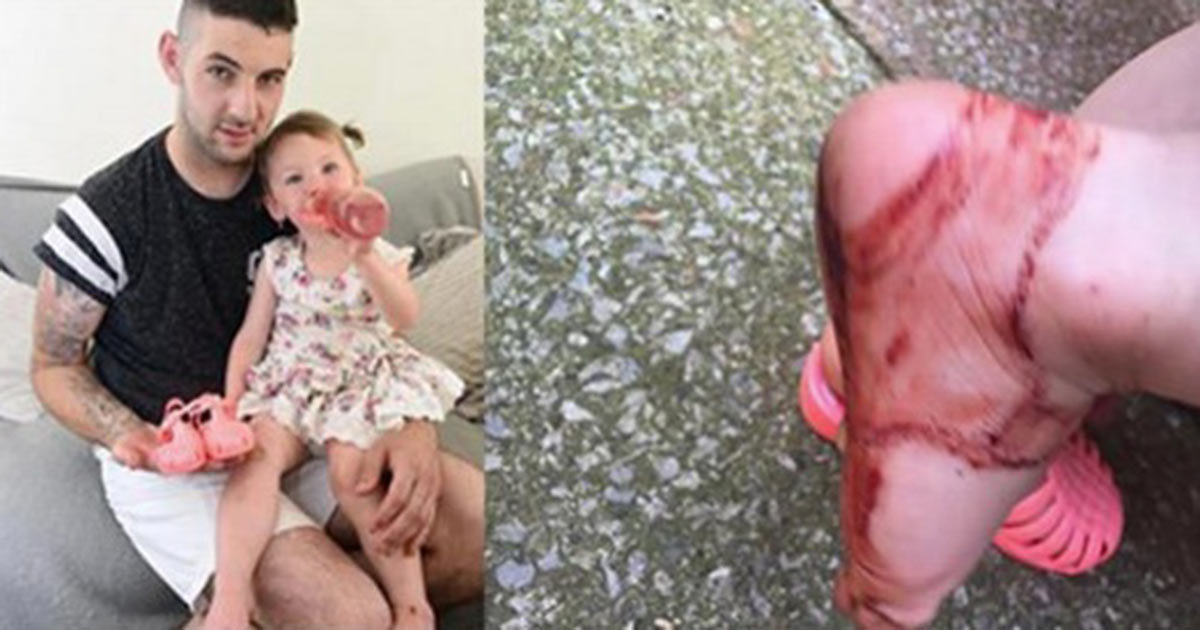 Children’s birthdays are such joyous occasions. From the friends and the games to the decorations and cake, there are so many reasons to smile. And it’s hard not to melt a little as your little one opens his or her presents and looks with wonder at their birthday gifts. As parents we only want the best for are kids, so it goes without saying that we do our best to choose presents that won’t harm our kids. So when we buy shoes for our kids from a major retailer, we assume that they’re safe. But that’s not always the case, as one mom from Blackpool, England found out recently. Lisa Connor recently bought a pair of pink jelly sandals from UK clothing retailer Next to give her 2-year-old daughter as a birthday gift. But the shoes ending up ruining the little girl’s party and wreaking havoc on her feet. So now the mother is warning other parents about the sandals.

Two-year-old Esmé had only been wearing her new jelly sandals for about half an hour when she started crying out in pain. She ran to her mom, Lisa, who was shocked to see her daughter’s feet covered in blood.

“Esmé was in absolute agony. I couldn’t believe it because she had only been wearing them for half an hour. It’s not like she was running around in them for hours. She was just plodding around the house and then came running in in tears,” Lisa Connor told Metro UK.

Lisa says she’s aware that new shoes often rub a bit for a a day or two, but she says that this wasn’t an ordinary case breaking of in a pair of new shoes. Her daughter’s feet were completely covered in blood.

Esmé’s dad had to calm her down for an hour afterward, but still, the incident ruined the girl’s entire birthday.

The fashion chain, Next, where Lisa bought the sandals from, took back the sandals and is inspecting them to see if there’s something wrong with them. But Lisa believes that the chain should stop selling the shoes completely.

“Other parents saw my pictures and messaged me to say they had similar problems. I hope it doesn’t happen to anyone else,” Lisa said.

A spokesperson for Next, however, says that the company has never heard of this problem before.

Next Jelly shoes recalled after they did this to a young girl – Defective Products Claimhttps://t.co/tnD0mYEvKW pic.twitter.com/OkD7HaB5zp

Please share Lisa’s warning with all of the parents in your life. Let’s hope that no more children have to suffer for this!