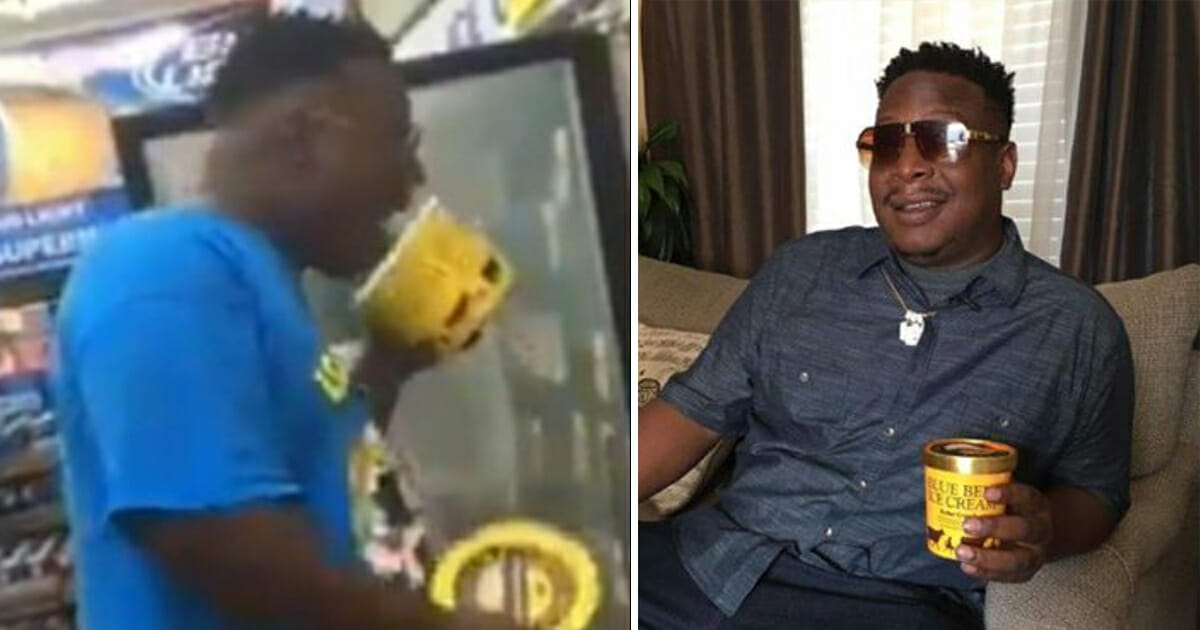 Lenise Martin III, the man who was arrested after ‘copy-catting’ the girl who licked a carton of Blue Bell ice cream before putting it back on the shelf, has spoken out to defend himself.

Martin was arrested on July 6 by the Assumption Parish Sheriff’s Office, but it appears he’s since posted bail.

Speaking to WVLA, Martin claimed the whole thing was simply a joke that got out of hand. “It was a joke with no criminal intent or activity … but I was locked up with murderers and real criminals on maxim security,” he said.

According to reports, Martin was asked to return to the store where he’d licked a carton of ice cream and placed it back on the shelf.

Louisiana police, meanwhile, claim Martin was inspired by the video that went viral last week showing a girl doing exactly the same thing. Their belief is that Martin, who is 36-years-old, was trying to cash in his 15 minutes of fame.

He was arrested and detained on July 6, after Assumption Parish Sheriff’s deputies received a tip from a grocery store in Belle Rose.

Commander Lonny Cavalier told CNN that Martin had taken a carton of the ice cream from the fridge, licked it, poked it with his finger, and the finally placed it back. Martin posted footage of himself in the act to Facebook, which Cavalier says is proof he was doing it to try and find viral fame.

The 36-year-old later produced a receipt for the purchase of the ice cream, suggesting he had bought it himself after licking it. Cavalier, however, isn’t satisfied.

“Taking into consideration that he eventually purchased the same container is one thing,” Cavalier said.

Lenise Martin III, 36, can be seen on video pulling out the carton of Blue Bell Ice Cream, licking it and poking it with his finger >>> https://t.co/undrHgUbYr pic.twitter.com/OEGnNnacw4

“However he puts it on Facebook to gain this notoriety and at the end of the day, it gives other people ideas that are not the best interest of public health.

“He did it and he did want to create some notoriety for himself by posting it on Facebook and that’s exactly what he did.”

Martins has been charged with unlawful posting of criminal activity for notoriety and publicity, as well as criminal mischief for allegedly tampering with property.

The only Blue Bell Ice Cream being licked here in Keller this holiday weekend will be the kind you’ve already purchased. Cpl. Clark and Officer Bryan are seeing to that. #NotOnOurWatch @ILoveBlueBell pic.twitter.com/9BbBqN8mh0

What do you think about it?