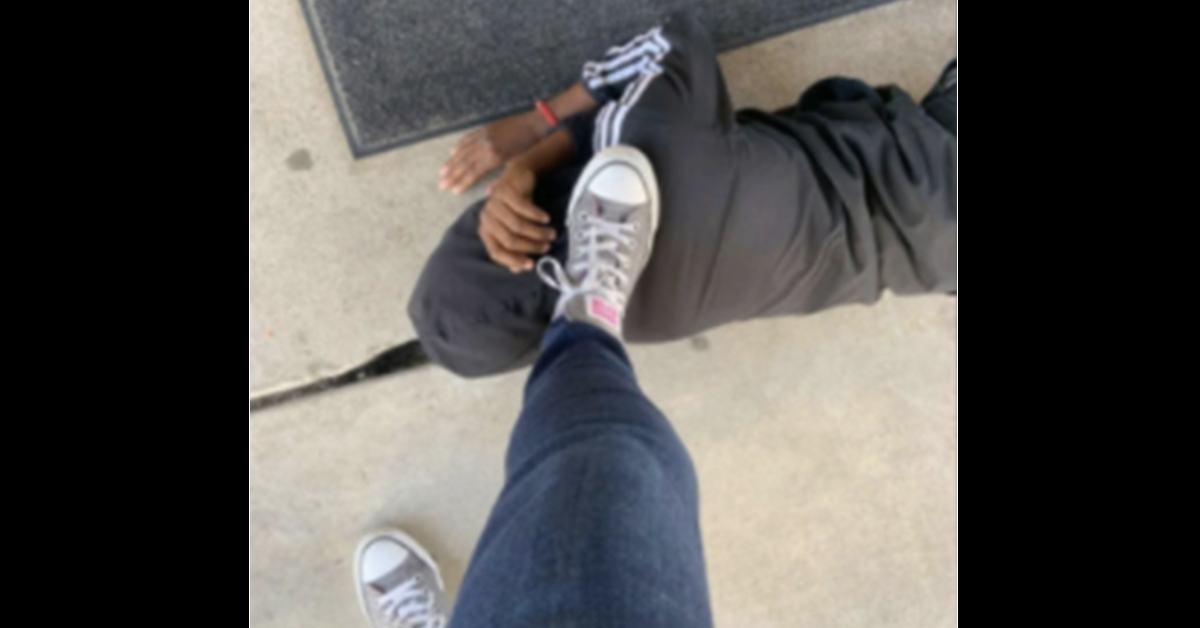 On the day the world held its breath while the verdict in the Derek Chauvin case was read out – a white teacher texted an image of her putting her foot on a black student’s neck as a ‘joke.’

The teacher has been put on administrative leave after texting the “staged” photo to the student’s mom.

It happened at Lamar Elementary in Greenville, in Texas, and involved an 11-year-old pupil identified as Zaelyn Jackson.

The teacher is reportedly a friend of Zaelyn’s mom, who said she was making a joke about the schoolboy not returning an assignment and didn’t put any pressure on his neck.

It happened the day former police officer Derek Chauvin was found guilty of murdering George Floyd after his put his knee on his neck for more than 9 minutes.

Chauvin will be sentenced in around eight weeks, and faces up to 40 years behind bars.

Family members of the schoolboy have called for the teacher, who is white, to be fired for her so-called ‘joke’ photo.

Zaelyn’s aunt Lakadren Jackson shared the image, which she described as “inappropriate” on Facebook.

She wrote: “This stuff right here is unacceptable. Under no circumstances should this have happened. This is my nephew and his teacher and she thought it would be funny to do some s*** like this.

“She said (this is the day). I’m pi**ed cause today and any other day this is not acceptable.”

Zaelyn told CBS: “The teacher gave me a note, and she said my mom can put – put her foot on my neck if she have to.

“I did go with the joke. I don’t think she was going to put pressure, and she never did.”

Dr Demetrus Liggins, superintendent of Greenville Independent School District said: “Whether the student was a willing participant or not, whether it was a staged picture or not it was still extremely, highly, inappropriate and should not have taken palce and definitely should not have been photographed.”

His parents have mixed views on the matter with his dad telling WFAA that he didn’t like it the moment he saw it and it was never supposed to happen.

His mom said she doesn’t think the teacher should be fired telling NBC 5: “I didn’t think anything of it. It was ‘ha ha’ and I moved on. The picture then began to bother me a little bit, showed it and my family got really upset about it.”

It is being investigated by the Greenville Independent School District, which sent an apology letter to all parents at the school.

This teacher’s actions cannot be justified regardless of what anyone says or thinks, what she did was unacceptable.

Do you think this teacher should be fired for her actions? Please comment below and share this story.