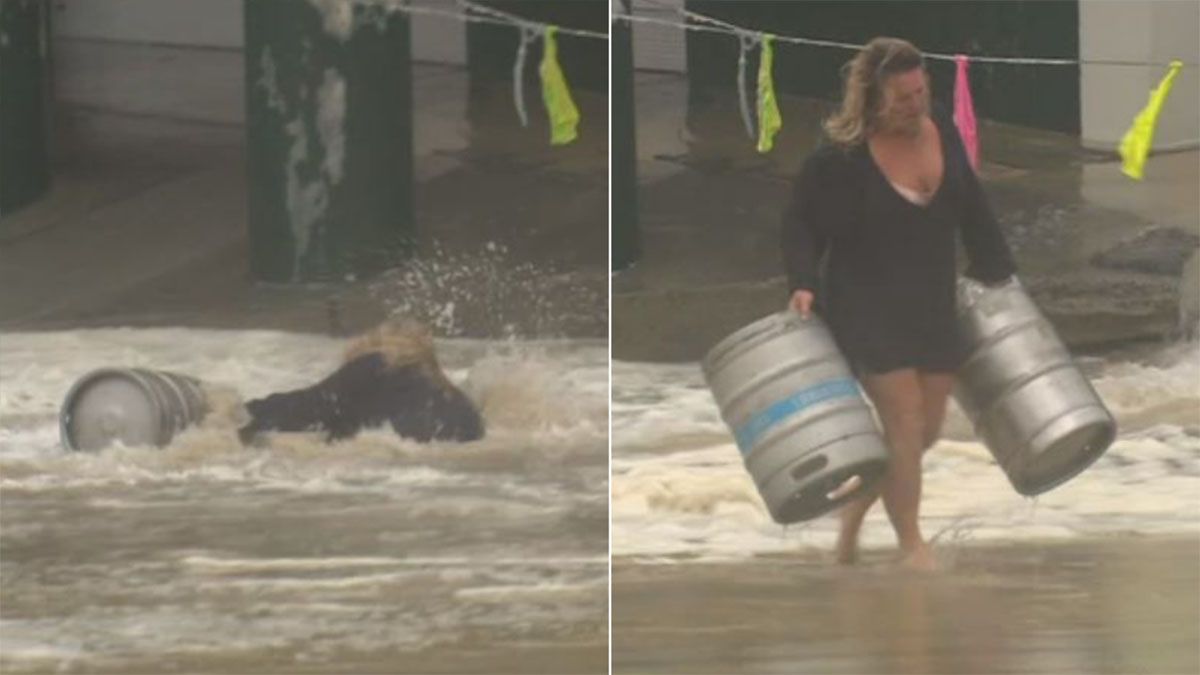 As children finished school ready for the summer vacation in Australia’s Gold Coast their plans for lazing on the beach were hampered by the strangest of ocean sights.

Beaches along the Queensland coast were likened to “bubble baths” as wild seas and strong winds whipped the ocean up into a foam.

“I’ve been down here every year for the last 20 years and this is the first time I’ve seen it like this,” said one woman interviewed by Australia’s 7 News TV team.

But as surfers dodged ocean debris and one woman was filmed saving her dog who had got lost in the foam, one woman emerged as the hero of the hour for saving rolling beer kegs which had got swept up in the drama of the high seas.

As the foam reached over 3ft high in some areas, the tide covered the parking lot of Currumbin Beach Vikings Surf Life Saving Club as staff members scrambled to secure loose items.

One staff member was caught on camera jumping into the dangerous seas to quickly grab two beer kegs which had got caught in the tide.

The woman waded through the foamy waves to retrieve the beer and get them back to dry land.

Locals and tourists have been gathering to film and photograph the unusual sight, something local residents are at a loss to recall when they’ve ever seen similar ocean views.

The rare weather phenomenon is not only a spectacular sight but has proved to be dangerous with Karlene York from the State Emergency Services reporting 900 requests for assistance since the severe weather front hit, as per News.com.au.

The dangerous weather is expected to continue up until at least Tuesday, December 15 with South East Queensland also being hit by the cyclone-like conditions.

“I’m smiling because I see the power of mother nature but behind it is a real message, a real message that climate change is real,” one passerby told 7 News.

The area is still recovering from horrifying bushfires.

Queensland Fire and Emergency Services commissioner, Greg Leach said: “Only last week we were dealing with bushfire situations and now the big wet has arrived, and so we need to be prepared not only for the weather we are dealing with now but we’re likely to see over the coming month.”

If you were impressed with the speed at which this woman rescued the much-needed beer kegs don’t forget to share this story with your friends and family.